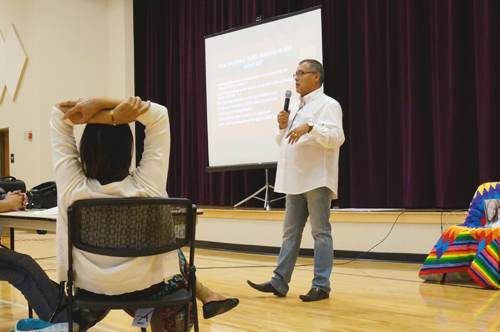 SISSETON, S.D. – Members of the

Sept. 26 to educate members of the tribe on LGBTQ Native issues while

honoring one of their own who was killed earlier in the month.

The group – the first Two Spirit

mission in June of this year. A testament to the growing power of

social media on the reservation, the event “Gay is OK” was the

impetus for forming the society. “We all went out to the corner,

stood outside and held signs. And while we were standing there, we

talked about forming a society, so we set a meeting date and from

then on, it’s been going ever since,” Vernon Renville, society

The momentum culminated in the

tribal citizens, a screening of the film “Two Spirits” about the

identity from Lenny Hayes, a tribal citizen and member of the

While the society is geared toward

creating a place for Two Spirit people, it is an inclusive group that

reservation. “I previously worked at the youth center and kids

talk to their kids. Or they think they’re having these feeling and we

It’s been a struggle, confronting a

community that attaches shame to the LGBTQ identity for the

newly-formed society. “The reception has been pretty positive.

There are still some who think it shouldn’t be talked about. The

older ones in the community, it sounds as if they think it should be

like, ‘if that’s the way someone is, then just let it be and don’t

acknowledge it,’” Crystal Owen, ally and society member said. “And

be acknowledged and appreciated and loved for who they are. We become

too oppressed if we don’t talk about it, if we remain oppressed by

that type of thinking, it’s not good.”

She hopes to see members of the tribe

as well as elected officials welcome the existence of the society.

been acknowledging her children who identify as Two Spirit. “I

don’t think a lot of dialogue has been going on. To me, it’s just

that people are fearful of the unknown. I think it’s just fear, a

lack of education, a lack of knowledge. My son is gay, I have three

daughters who might say they are bisexual. So I have seven kids and

four out of the seven have at some time identified [as LGBTQ].”

Renville struggled to find his place

as a Two Spirit in his tribal community, but through prayer and

asking his elders about the place they held in Dakota culture, he has

found some wisdom. “I discovered that we weren’t actually outcasts.

We weren’t shunned or anything, that we were actually highly-revered

Unfortunately, that wisdom came too

late for two members of the community who identified as LGBTQ. On

Sept. 8, Dallas Farmer was killed in his home in Old Agency Village.

Reports allege one of his brothers was responsible for the killing.

“Everyone took it hard because Dallas is a young man. We’ve just

seen him in the community, he was such a free spirit, he wasn’t

ashamed of who he was as a Two Spirit person. So I think the

community was shocked at his death. How could such a young, beautiful

spirit have to die and leave this earth in such a way, such a violent

An empty chair, star quilt and photo of Farmer was set out during the

event, as well as for Jarrod Marks, another Two Spirit tribal citizen

who was murdered in Chicago last year. “I want to honor him in

the main reasons why I felt it need be we honor him. His family is a

For Owen, she hopes that the dialogue

started at the event will continue until their tribe welcomes Two

Spirit individuals, instead of shunning them. “My hopes for the

future would be that people would be more more aware, that our

schools would become educators of acceptance of each other. There’s

young age, I think maybe everybody goes through that. To be able to

accept our young people, if that’s who they are, then to accept them

Spirit Society and SWO member, presents information on what the LGBTQ