American Indian women are ready to lead in their communities, whether it’s on tribal land or on local, county and statewide levels. Over the weekend of November 18-20th a group of twenty-eight American Indian women, representing over 12 tribal nations from across the Midwest region, drove down the snow-covered gravel road winding into the Deep Portage Learning Center near Hackensack, Minnesota, to gather, strategize and develop their personal strengths for leadership.

Nevada Littlewolf (Leech Lake Ojibwe), the Rural Field Organizer for The White House Project (a national non-partisan non-profit organization), envisioned the first-ever Go Run for American Indian Women as the beginning of a movement where American Indian women lead the dialogue, provide the expertise, and build real support to be effective leaders. The training supports American Indian women in running for public office, working on campaigns, and advancing their leadership in the public sector.

Led by American Indian trainers with direct political expertise, the American Indian Women Go Run was infused with voices fresh from the campaign trail. As one of the lead trainers was Prairie Rose Seminole (Three Affiliated Tribes of ND) who is Coordinator for the Fargo Native American Center, and also trains for The White House Project and Wellstone Action. Seminole worked with the women to create a concrete campaign plan, sharing her field experience from a highly competitive race for North Dakota state legislature seat.

Elizabeth Towle Scott (Mille Lacs Ojibwe), a young woman who has organized tirelessly on Native American Get Out the Vote efforts, strategized with the women leaders to creatively reach Native people to encourage voter participation.

"Bring a package of hot dogs for those rez dogs when you’re door knocking! Do whatever it takes to get out there and talk with people," Towle Scott enthusiastically advised.

Recently winning her 2nd term for Virginia, MN, City Council, Nevada Littlewolf emphasized connecting with people through telling your own story, and recognizing that American Indian women bring critical issues to the table which is largely absent from usual political campaigns. 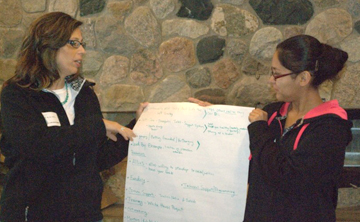 The women practiced 90 second stump speeches, sharing their passion for their communities and their issues, like the sex trafficking of Native girls, wild rice and sulfate standards, and the high prevalence of suicide in tribal communities.

Susan Allen, currently running for the Minnesota State House of Representative District 61B seat, and Keynote Speaker at the training, said it’s time for real representation, truly reflective of the communities being served.

While running for an elected position can seem intimidating, Diane Gibbs (Mille Lacs Band Ojibwe Tribal Council District III Representative), Sally FineDay (Native Vote Alliance of Minnesota and 2010 Beltrami County Commissioner candidate), Nevada Littlewolf (Virginia, MN City Council), and Peggy Flannigan (Wellstone Action and former Minneapolis School Board member), all share a belief that there is room at the table for more than just one American Indian woman leader. And they all send the same message: "Go Run! American Indian women can do this!"

Tribal cultural practices and values were present during the training. Standing in a circle and smiling to each other, the women smudged. The fast paced training agenda program was interspersed with poetry, prayer and a performance of the Oshkii-Giizhik women singing and drumming.

Lyz Jakkola, Oshkii-Giizhik singer, said, "It is so important for women to send their voices out into the world."

The women singers talked about the importance of women listening to one another, sharing the lead, and working together to create something of value for themselves and the wider world.

Leading can be lonely work, when very few American Indian women are in elected office, making building bonds with other women critical. Malita Spears-Kletschka (Red Lake Ojibwe) said, "We really took time to listen to one another."

Peggy Flanagan said: "I feel fed (motioning to her heart) by being here with all of you."

The organizers believe that when American Indian women have the specific tools and resources they need, they will win elected offices, ultimately changing the face of leadership.

The event was supported by the Blandin Foundation, the Northland Foundation, and the Shakopee Mdewakanton Sioux Community.

For more information about The White House Project see their website: http://thewhitehouseproject.org.