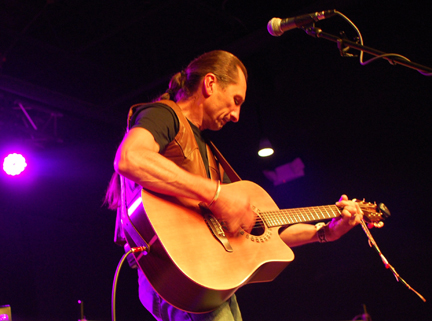 On October 6, from 2-4 p.m., two-time Nammy winning Cherokee folk singer Michael Bucher will be presenting a live musical performance and speaking engagement to students and community members on the Lac Courte Oreilles Reservation in Hayward, WI.

Bucher, an artist known for his performances which combine reactionary folk music and informative storytelling,  will also be telling Native Youth and other members of the LCO community about the You Are Not Alone Network,  a new online social media and suicide resource website founded in part by Bucher, which was created to help put a stop to Native teen suicide.

Bucher said, "I’m looking forward to traveling to the LCO Reservation to speak and play a few songs and for the opportunity to talk about the You Are Not Alone Network (YANAN.)

"As co-founder, I’m happy to say that we launched our inter-active website on Sept.10, 2011. It’s still in the tweaking stage but all in all is ready for our Native youth who are struggling with taking their own lives. As you know, in Indian country, we have a suicide rate 3 times higher in kids 19 and under, than any other race in the country. The website will grow with time, but here and now, we tell our kids across the country, Alaska and Canada, you are not alone with your struggle."

Bucher said he is also excited to be performing in his home state and for the Native radio station WOJB, where he got his start as a musician.

Bucher’s most recent album "Believe," honors children throughout Indian Country who are fighting against suicidal thoughts. The album won Best Folk Recording in 2010 at the 12th Annual Native American Music Awards.  The CD had been nominated in five categories.

The Lac Courte Oreilles Ojibwa Community College is postponing classes and opening the concert to the entire community. The concert is free.