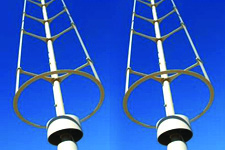 The Corporate Commission of the Mille Lacs Band of Ojibwe has become a major investor in a wind turbine project that could create up to 15 jobs in District II of the Mille Lacs Reservation in Minnesota, which includes areas near McGregor.

The Corporate Commission’s investment in Mariah Power – a manufacturer that provides low-cost, vertical wind turbines for residential and commercial use – allows it to have a three-year contract to assemble wind turbine parts at a facility located in District II.

The facility, which will initially be housed in the former McGregor

skating rink building, will first produce generators used for the

Mariah Power wind turbines –called Windspires. The Windspire is unlike

traditional wind turbines that feature rotating blades, similar to an

airplane propeller. Instead, the 30-foot tall Windspire is

propeller-free and generates wind power by spinning on a center pole.

About seven employees will be needed for the McGregor facility’s

startup, with possibilities to add more employees in the future. The

facility is expected to start production in May 2009.

In early 2010, the facility is projected to start producing the

inverters that are used for the wind turbines. Inverters take the power

power homes, businesses, and other facilities. This production is

expected to need double the number of employees. Products assembled at

the District II facility will be shipped to Manistee, Mich., where the

November 2008, which was organized by Corporate Commission development

to help identify and pursue potential business opportunities that would

create economic development in their community.

community input at the summit. With the guidance of the Corporate

Commission, the committee focused its first priority on developing a

this investment. Band members chose this, which will further their

long-awaited goal of bringing economic development to the East  Lake

addition to being a community selection, this investment aligns with

our overall value of environmental responsibility.”

In addition to the investment in Mariah Power, the Mille Lacs Band’s

Department of Natural Resources (DNR) will install one of the

Community  Center.  The DNR will initially study the Windspire’s energy

output at this location and examine possibilities for using the

technology with Band homes and facilities.

“The Mille Lacs Band is excited to have a Windspire on the reservation,

“This is another example of our efforts to protect the environment,

which is a valuable part of the Band’s culture,” said Curt Kalk, Mille

The Mille Lacs Band of Ojibwe is a self-governing, federally recognized

Indian tribe located in East Central Minnesota. The Band has more than

4,000 enrolled members, for whom it provides a wide variety of programs