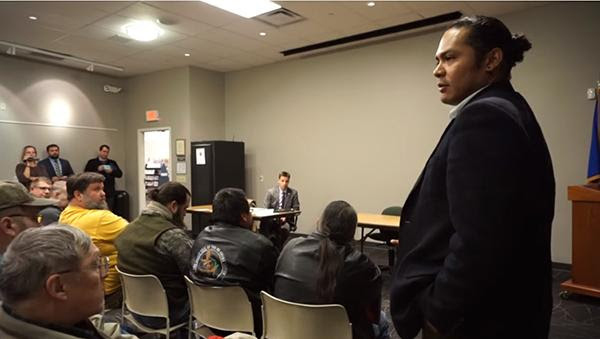 A bill from Wisconsin Sen. Chris Kapenga, R-Delafield, and Representative Robert Brooks, R-Saukville, would remove protections for American Indian burial sites and force the Wisconsin Historical Society to allow the excavation of a centuries old effigy mound in order to prove there are human remains within the mounds on their land.

The bill stems from a company’s wishes to extract $10 million to $15 million in limestone aggregate from the site. Wingra Stone and RediMix, a concrete and stone producer, has mined extensively on the 57-acre plot surrounding the effigy mounds for years. The site is located inside the company’s Kampmeier Quarry, north of the town of McFarland.

Opponents of the legislation say the mounds are a significant cultural, religious, and spiritual site, and that the bill runs counter to the purpose of Wisconsin Burial Site Protection Act.

At a packed town hall meeting held at the Waukesha Public Library on December 14, Kapenga heard from numerous community members their opposition to the proposed bill. Ho-Chunk District 2 Legislator David Greendeer, said the issue is nothing new to the Ho-Chunk people. “Every place that we walk within the state of Wisconsin; every building that’s been built; every metro-city is built over all of our people. Everywhere around the entire United States, is over all of our Native people,” said Greendeer.

Greendeer was careful to emphasize that the Ho-Chunk presence was not to “oppose” Kapenga personally but rather to work cooperatively towards a favorable resolution for all.

As mining has exhausted other parts of the 57-acre quarry, Wingra has challenged the existence of human remains at the site in an effort to prove it should be removed from the state’s registry of protected burial sites. That was in 2010 and in 2012, the State Historical Society ruled there was insufficient evidence to determine the mounds do not contain human remains. Since that decision, the issue has been tied up in litigation.

“The fact of the matter is there is no proof that there’s any burial materials there,” said Wingra President Bob Shea. “We certainly wouldn’t disturb a known burial site. But there needs to be some definitive means to be mostly certain – if not completely certain – that there are remains at the site.”

The mounds at Kampmeier Quarry are part of the once-larger Ward Mound Group, which has mostly been destroyed.

Wingra began operating the quarry in 1962, but the Ward mounds remained unprotected until a 1986 law gave the Historical Society the power to identify and catalog potential burial sites and their surrounding lands for preservation. Destruction of the remaining mounds was stopped when the Ward mounds were officially cataloged as a burial site in 1990.

“For us, our oral traditions and history tell us those are human remains,” said Ho-Chunk spokesman Collin Price. “These mounds, to our people, represent so many things. They are a huge part of our culture and what would essentially happen is they’d be destroyed. To excavate their remains is grotesque to even consider,” added Price.

Reprinted with permission from the Red Cliff Band of  Lake Superior Chippewa Indians’ Miisaniinawind “This is Who We Are ”.