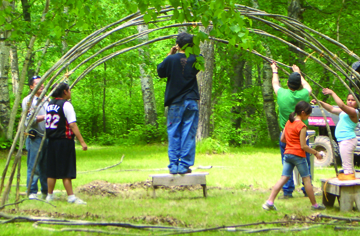 Algin Goodskye grabbed a hold of an ironwood sapling with both hands and pulled hard, as his teacher David Matrious cut away some old wiigoob bindings. Goodskye dragged it over to a pile of saplings, then he came back and asked Matrious if he could help with the next one.

Goodskye, a 12 year old Ojibwe from Minisinaakwaang village near McGregor, Minnesota, was one of ten students who participated in the Misizahga'igani Anishiinabe Izhitwahwin Immersion culture/ language summer camp for Ojibwe children (held in June) from the Duluth public schools.
He recently moved to Duluth to improve his education opportunities, according to his mother Tanya Aubid-Schmidt. “I kind of like it here (at Rutledge),” said Goodskye as he took a break from his work, “because it’s getting back close to home with some elders that I know.”

The summer camp at Rutledge is a key service that the Mille Lacs Band of Ojibwe offers to Ojibwe Indians in Minnesota. Led by Larry Amik Smallwood, the language immersion program is a unique opportunity that combines elders’ teachings with actual experiences in making and building Ojibwe crafts and dwellings.

Goodskye paid close attention to all of the language teachers as they talked to the Duluth students about traditional seasonal activities like maple sugar harvest, spear fishing, drying fish, and wild rice harvest. He was one of the students that laughed the hardest at Clara Jackson, a Leech Lake elder, who used a lot of humor in her lesson on seasonal Ojibwe crafts. She taught the students Ojibwe words as they touched and handled objects like a mukuk basket, wiigwas sheets, and wiigoob bindings.

“Some people didn’t like to make the ends of the canoe because it was very difficult, but my grandpa always said to make the ends,” said Jackson, “then you can ram other boats…hmm, he must have been a great warrior.” This made the students laugh even harder.
Smallwood is a well-known powwow emcee, ceremonial drum keeper, and Ojibwe language teacher. He looked off into the woods as he described the power and the value of the language program for the Ojibwe people.

“Our kids today have a completely different life from the way we were brought up,” said Smallwood. He said his own upbringing was by elders who lived deep in the forest behind Aazhoomog village near a small river. He was absorbed in the language of his ancestors and educated in a culture where everything that was needed to survive was crafted by hand from wood, bark, roots, or plants. “This camp gives our kids a chance to re-learn the old ways so that they can find the real direction in their life,” said Smallwood.

All the teachers used both Ojibwe words and phrases with English in their lessons as they involved the students in basket and canoe making, and wigwam construction. Lee Staples (Obisanigeezhik) held the attention of every participant with his description of the spirits that are essential to recognize and give help to the Anishiinabeg. Staples is a ceremonial drum keeper and spiritual advisor who helps people throughout the region. He too was raised by elderly grandparents in the early part of the 20th century in the remote village of Aazhoomog.

Staples began his lesson with the students by teaching about the manidoog and their good qualities. And then Staples taught the rules of life he learned from his grandparents like: do not interrupt older peoples’ conversations, avoid playing outside at night, don’t waste your life on alcohol, forgive those who have been mean to you, if you put your shoes on the wrong foot you’ll meet your doodam, and if you button your shirt wrong you’ll meet a girl. “There’s no culture in Duluth like here,”Goodskye said, while he was taking a break from playing.

Mark St. Germaine, Lac Courte Oreilles Ojibwe, will be a sophomore in high school at Eau Claire Memorial. He can be contacted at stgermrd@aol.com.