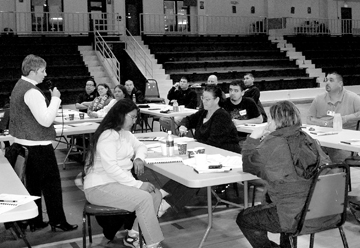 “This innovative program is designed for both tribal law enforcement

personnel and community members who are concerned about crime and

quality of life issues on tribal lands and in their communities”, said

The training was open to all tribal participants, including law

During the presentation, participants were taught how to utilize the

organizational transformation) to address both crime and disorder

concerns in their neighborhood. Each person attending received a free

held on topics like: Tribal Community Engagement; The Problem of

Underage Drinking; Graffiti on Tribal Lands; Disorderly Youth in the

Participants were given instruction on the implementation of the COPS

Native American Training series and proper use of the curriculums,

presentations and tools included in the toolkit. Attendees also

various programs contained in the series to their own unique cultural

Several other tribes were invited to participate in the workshop said

Benaise, but the bad weather kept them from being able to attend.

“Although it was disappointing that other tribes could not make it, it

allowed for maybe a better session for the Red Lakers who did come,

allowing for one on one interaction, and more sharing,” said Benaise.

student, and a casino manager. “There were five Red Lake police

officers here which is awesome as well as one conservation officer,”

said Benaise. “The training will enhance our community patrols and

boards, breaking the ice to get police involved in the community. We

are all trainers today, we are willing to offer that training to other

The program was presented by the Upper Midwest Community Policing

Institute (UMCPI) A Regional Center for Public Safety Innovation. It

Coalition, and Drug Free Coalition of North Central Minnesota, and

sponsored by the Office of Community Oriented Policing Services (COPS).