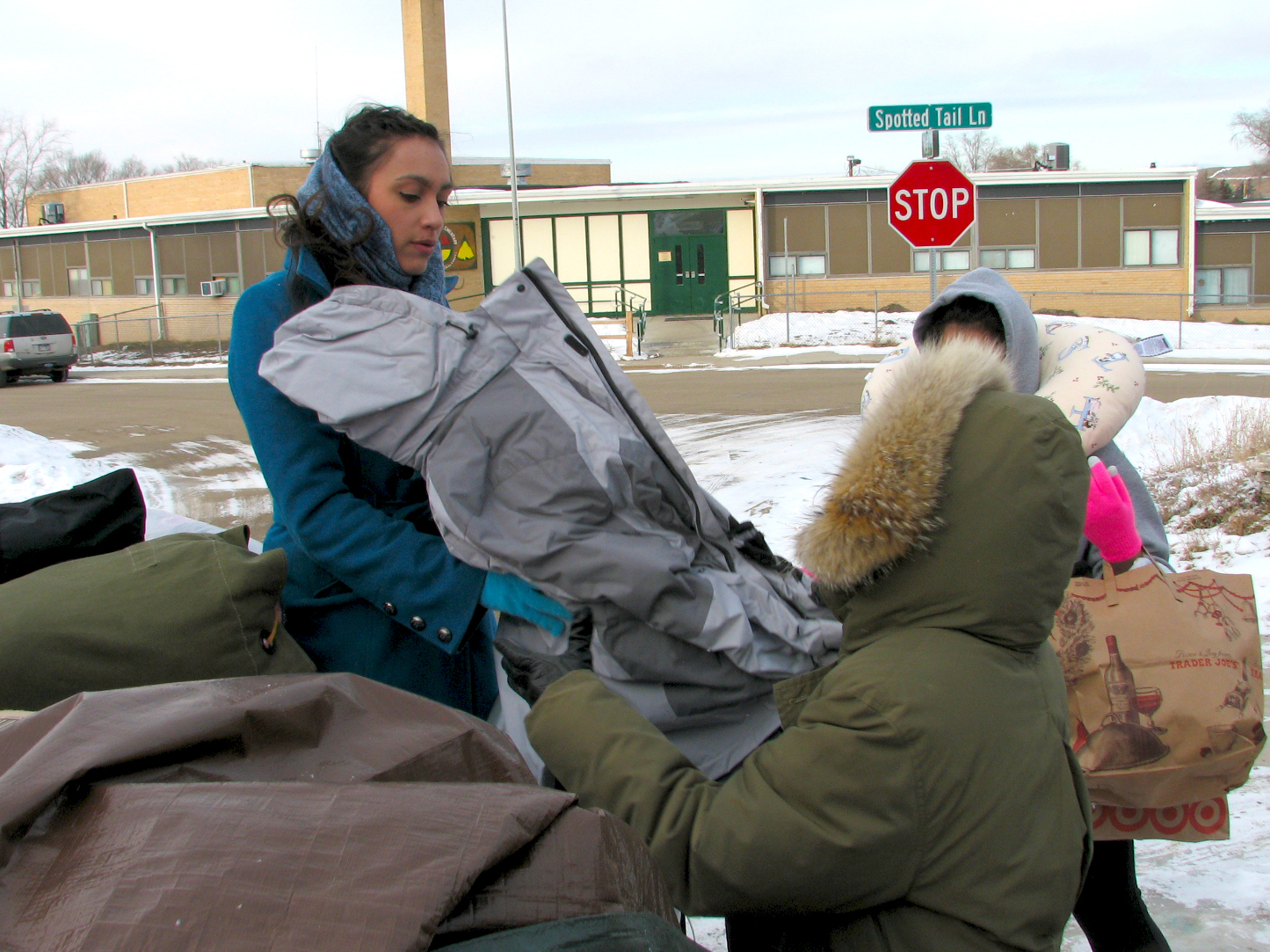 familiar to most Native Americans living in the Twin Cities. For

Lorna Her Many Horses, known to most as Emmy, it’s an opportunity to

give back to the children and elders of the Rosebud Sioux Tribe.

started as a personal summer cleaning project that quickly progressed

into a relief mission for her home reservation. For the

second-poorest reservation in the country with an unemployment rate

as high as 85 percent, every day items like clothing can be a

struggle for some to provide for children and elders, particularly in

time I have gone back, I’ve taken things that were mine that I didn’t

want anymore to the the Spotted Tail Family Center. This summer, I

had a lot of friends who were just getting rid of stuff. In August, I

just put something on Facebook, asking if people had items to go to

the children’s home. At first I thought, no one’s going to give me

anything and I was going to be embarrassed. But the more people who

saw it, the more people contacted me about donating, I was

media wasn’t Her Many Horse’s only means of receiving donations. “I

son’s stuff to Goodwill, but she said she wanted to take it somewhere

where it was needed. I thought she was going to give me a grocery bag

full of stuff, thinking that anything helps, but she had two or three

giant trash bags of pre-teen boys’ clothing. And as things came in, I

thought, there was a lot of stuff here.”

that point, donations began pouring in from friends around the Twin

Cities. “After first carload, people said ‘I have stuff I want to

give you.’ From there, it became people bringing me carloads or truck

point, Her Many Horses began deliveries to Rosebud. “I took a

carload of stuff back with me. My trunk barely closed, I couldn’t see

out the back window and passenger seat was filled. From there, I just

kept getting stuff from people. Primarily it was just people I was

Facebook friends with and as someone from home would come up here,

they would take a carload of stuff back.”

traffic violations. “My mom came in October and she started packing

stuff around my brother, surrounding him on all sides. There was

and passenger window.” Over the Thanksgiving holiday, Her Many

older brothers and to herself. Her adventure included a mismatched

trailer that was so heavy, it lifted her car’s front axle off the

she made the decision to carry out her goal of helping. “Rather

than it being just one or two of those trips, I had to decide if I

was going to stop taking donations or renting a trailer. I think that

ultimately, after talking to various programs, there was still a very

is what drives Her Many Horses to collect household and clothing

items. “Because this is something I’m capable of doing, it’s

something I felt was my responsibility to do. Being so far away from

home, I feel like I’m not fulfilling some duty to where I’m from. I

lot of opportunities and helped me out a lot, I owe them something.”

will always be a challenge for the Rosebud Sioux Tribal citizen, but

she keeps to her convictions. “This is within my means, it takes a

lot of time or gas money, it takes over my living but it’s something

that I can do that helps, so how can I not do it?”

deliveries to the Spotted Tail Family Center and the Sicangu Oyate

Tipi Homeless Shelter and the St. Francis and Parmelee Community

Elderly Housing Complexes are based on the greatest needs for her

reservation through her experience. “When I was growing up, we

always took stuff to different places. My mom had friends who would

mail us boxes of clothes. From what we could tell, Parmelee and St.

Francis were some of the most-neglected communities. A lot of times,

when organizations come to the reservation, Rosebud and Mission are

close to those two. St. Francis and Parmelee haven’t seen much of

those things, it’s still relatively close to Rosebud, from what we’ve

observed. There are farther out communities, but it’s harder for us

to get out there.”

her in this cause. “My friend Adrienne Zimiga is from the Pine

Ridge reservation and Mark Adotossaway is from a Canadian reserve, so

they both know how great the need is for something like this. My

helped figure out how to tow the trailer, getting the hitch on, doing

start with donations. “I think another part of it is that a lot of

people don’t know how to make an impact in different communities, so

when I put this out there, people wanted to help because someone was

saying, ‘this is a way you could help.’ I wasn’t asking for money, if

they wanted to donate money, I used it to buy canned goods for the

Augsburg grad student, working on her master’s degree in special

education and who plans on working with children, her cause is a very

personal one. “I look for what people don’t need or want anymore;

some may not know where those things can go, they want it to go

somewhere it’s really needed. There are families that can’t afford

situation who no longer has a coat,” she said.

so when I put it out there to say you can donate these things, I’ll

do all the work, I’ll take it to where it’s needed, people didn’t

have to worry. They knew it was going to a place with very little

other resources, it made people feel like they were doing something

case of children, Her Many Horses expanded on the harsh realities of

life for some on her reservation. “There are some children who have

no ability to go out an find those thing, they may come from abusive

homes where they’re removed and they get to take nothing with them.

They’ve lost everything, they don’t have any of their toys, clothes –

may have been a part of their life.”

time being, she is still taking donations, but trying to slow down

regular basis. Her Many Horses can be contacted at