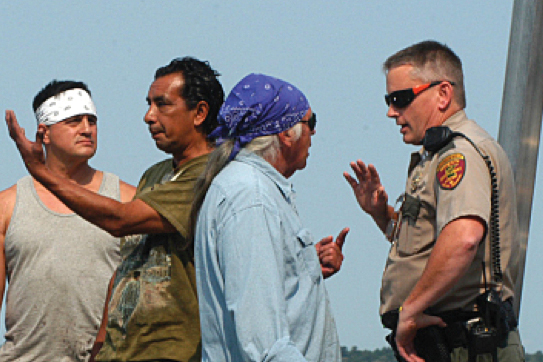 Four Ojibwe tribe members have been charged for gathering wild rice and setting gillnets during a protest last summer. In an attempt to strengthen hunting and gathering rights under the 1855 Treaty, dozens of tribal members from White Earth and Leech Lake bands gathered at Hole-in-the-Day Lake in late August.

Two protesters were handed citations at the time for harvesting wild rice without a permit, and two others for setting gillnets. In December 2015 Crow Wing County Attorney Donald Ryan decided to officially charge all four protesters. Ryan’s move opens the door for exactly the court battle protesters were seeking.

“Things are lined up,” said Frank Bibeau, a White Earth member and attorney. “We believe that federal court will uphold our treaty rights to hunt, fish and gather.”

Tribe members believe they have the right the hunt, fish and gather on all lands ceded in the 1855 Treaty, which covers much of northern Minnesota.

The Hole-in-the-Day protest was organized by the 1855 Treaty Authority. Bibeau works with the activist group. He said protesters hoped to garner charges and win their land use rights through a series of court appeals.

Morningstar Shabaiash and Harvey Goodsky paddled out into Hole-in-the-Day to gather wild rice, but DNR enforcement officers didn’t arrive until two men crossed over into Gull Lake and set a gillnet.

“The DNR doesn’t really care about wild rice,” Leonard Thompson said at the time, “but they get very touchy about their fish.”

DNR officers removed the net and handed out citations.

Actually charging tribal protesters is a change for Minnesota. In 2010, a group of 200 tribe members set gillnets on Lake Bemidji. Their nets were taken and reports were filed, but the Beltrami County attorney avoided a court battle by not pressing charges.

Bibeau said Ryan might have filed the charges just to see the longstanding land use issue resolved. “Everyone would like this settled once and for all,” he said, “so we don’t have to wonder about it anymore.”

Ryan would not comment on the details of the case, except to say the charges were based upon evidence of crimes and nothing more.

Shabaiash and Goodsky were both charged with misdemeanors for harvesting wild rice without a license.

All four will appear in District Court in Crow Wing County on Feb. 1.

Minnesota  Public Radio News can be heard on MPR’s statewide radio network or online at http://www.mpr.org/