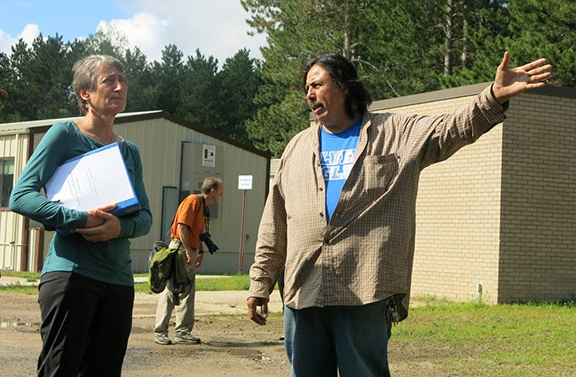 For years now, Bug-O-Nay-Ge-Shig high school students have been taught in a decades-old pole barn known as “Killer Hall” for its flimsy construction. When a storm rolls in those students sprint across a parking lot and take shelter in the middle school, because the high school might collapse under high winds.

Now the Bureau of Indian Education has allocated $11.9 million to replace the old pole barn, according to the office of Indian Affairs Assistant Secretary Lawrence Roberts.

Minnesota U.S. Sen. Al Franken said he’s been lobbying to build a proper high school building at Bug-O-Nay-Ge-Shig for six years. For a long time, he said it seemed impossible to get traction.

“We dramatically underfund everything in Indian Country,” he said. “It’s deplorable.”

It’s been nearly two years since U.S. Secretary of the Interior Sally Jewell toured the dilapidated school, saying at the time that she’d lobby Congress to fund a new $25 million high school building.

A year after that, U.S. Reps. John Kline and Rick Nolan toured the school again. At the time, Kline said the Bureau of Indian Education was tangled in bureaucracy and failing to take care of tribal schools.

“Washington must fulfill its promise to Native American students across the country,” Kline said in a statement. “I have long argued the Bug School is in need of dire replacement to address safety and educational needs of its students.”

While she’s happy that the bureaucracy seems to be untangling a bit, Trapp isn’t sure $11.9 million will be enough. The school is planning to build an addition onto the middle school to house high school classes.

“I have the plans on my desk,” she said. “A few things will have to be redesigned if we’re going to do this for $12 million.”

The Bug-O-Nay-Ge-Shig replacement funds are part of a larger push to rebuild Bureau of Indian Education funded tribal schools across the country. Of the 183 run schools, 78 are in such poor condition, government inspectors recommend they be torn down and replaced.

A list of 10 schools in the worst repair was also released in April. Those schools are in line for replacement funding, though just how much funding is not yet clear.

Franken said Bug-O-Nay-Ge-Shig didn’t make the list of priority schools, but Minnesota lawmakers were able to find other funding.

While the 10 priority schools will still have to wait for money to be allocated and doled out, Franken said, Bug-O-Nay-Ge-Shig will be able to start work within the year.

Minnesota  Public Radio News can be heard on MPR’s statewide radio network or online at http://www.mprnews.org/ .