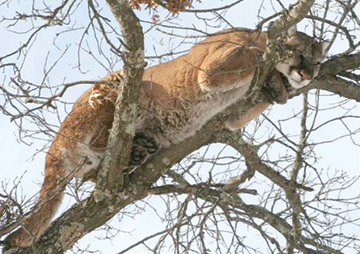 The yellow cougar loped and veered through the pine forest as chasing dogs howled and stayed close behind. Once the dogs got closer, the big cat leaped up onto a large oak tree and quickly climbed his way to the top far branches. There it perched itself and watched the commotion below. Soon the coyote hunters caught up to the dogs and stood far below in stunned silence. They stared in disbelief at the large mountain lion above them. This was northern Wisconsin, and mountain lions belonged in the Rocky Mountains.

The Wisconsin DNR was contacted by one of the hunters on March 3 and with the assistance of other dog hunters, a team of DNR biologists again treed the cougar on March 4. Hoping to tranquilize the cougar, wardens shot it with darts, but the chemicals were too weak to affect it. The cougar jumped the tree and the dogs, handlers, and the DNR agents chased the animal some distance before giving up, worrying that they might exhaust the big cat too much.

DNR wildlife specialist Ken Jonas said that the Department was interested in determining where this rare animal was going, what it was eating, where it was from, how long it’s been here, and why it was here.
“From a paw blood sample we collected…during the chase through the woods we figured out that it was a young male cougar from the Black Hills,” Jonas said. Had they been able to dart the cougar with an immobilizing agent they would have put a tracking collar on it. By following the animal, biologists would know if it stayed in Wisconsin or moved into an adjacent state.

The cougar is the largest wildcat in North America and adult male cougars weigh from 115 to 160 pounds. Adult females range from 75 to 110 pounds. Cougars are also known as puma, mountain lion, panther, American lion, and mishibijn (Ojibwa), and once roamed throughout Wisconsin. It was one of three wild cats native to the state, along with the bobcat and the Canada lynx.

The cougar disappeared from Wisconsin around 1910, but reports began to surface in the 1940s of possible cougars in the state. Since then naturalists and wildlife biologists have begun collecting reports of sightings. And since 1991, the Wis. DNR has conducted a standardized system of collecting reports of cougars.

Benny Rogers, a long time resident of the St. Croix Reservation, said that long ago cougars were occasionally spotted deep in the woods near their settlements. “Yeah, they were around here when I was young” said Rogers. “Over at Pine Lake (Indian settlement), there was a cougar over there,” he said, “you could hear him at night. The whole village was scared.” “It’s important it’s [the cougars] coming back,” he added, “there’s a reason for it, a story about it, that involves little spirit boys. My grandson seen them and the cougar. We’re supposed to listen to it.” Then he added, “The old timers would be happy.”

The first confirmed sighting of a mountain lion in the state was last January when one was spotted near Milton, Wisconsin. That animal was later killed in a suburb outside of Chicago. The current location of the large cat is unknown and it is Wisconsin’s second verified cougar sighting in 14 months.

Anyone sighting a cougar should report it to their nearest DNR office. Jonas advises to observe it at a distance and try of get a photo of it. If it leaves foot prints in the mud or sand, Jonas said to cover the track with a can or box to maintain its shape and prevent weathering.Mountain lions are listed as “protected wild animals” in Wisconsin and can not be killed without a permit from the DNR.