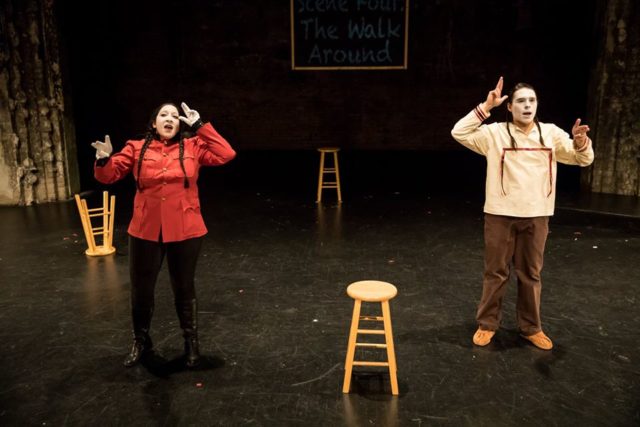 Sometimes you hear a story which breaks your heart. Breaks your heart because you never heard it, breaks your heart when you read it. In this case, I saw it. The play Almighty Voice and his Wife, is the story of Kitchi Manito Waya (Almighty Voice) known in English as Jean Baptiste. A Cree man from what is today known as One Arrow Reserve, he faced the most difficult times in Saskatchewan, Canada. It was the time after the buffalo had been wiped out and the people were being forced to the small reserves to starve. Canadian colonialism at its best.

This is the story of a man who shot a steer to feed his people and paid for it with his life. The play, written in l992 by Delaware playwright Daniel David Moses, expertly weaves history with surreal. Directed by Kathy Pardue and expertly produced by the Turtle Theatre Collective, Almighty Voice had its US premiere in Minneapolis at the Southern Theatre March 9th through March 11th. Marisa Carr plays the lead of White Girl, the wife of Almighty Voice (played by Ajuawak Kapashesit). The actors are Cree and Ojibwe, from Turtle Mountain, Moose Factory and White Earth.

In the first act, tragedy unfolds on a minimal stage: a blanket, a gun, two actors. That is how the story is told. Complex times, during the early residential school era, bring conflict to White Girl – but it is the complex times of a man trying only to survive that bring the deepest of tragedies. “The soldiers they have these clear beads they look through. Far away comes real close. All the walking seems to disappear.,” White Girl tells her husband. Almighty Voice calms her, “Listen Crazy one. You married Almighty Voice. Who is not afraid to say his name. Let your glass god hear it. Almighty Voice who has listened to our fathers and heard what they say. Almighty Voice who remembers our Creator and our people’s way. Almighty Voice who knows how to fight for you. Do you hear what I say?”

As Canadian Biography describes the salt to the wounds, “…Placed within the humiliating confines of the reservations, they could only travel with a pass and hunt within limitations. In their youth, Almighty Voice’s grandfather and father had ridden into great herds of buffalo to kill their meat; now there were only government steers distributed among the mendicant Crees on their reserves by the agents of the dominion government.”

A magnificent athlete and marksman, Almighty Voice was a teenager in the l885 Cree and Metis Louis Riel Rebellion. Inspired by the courage of that generation, they faced confinement and Canadian colonization instead. On Oct 22, 1895 Sergeant Colin Colebrook of the North-West Mounted Police arrested Almighty Voice for having killed a government steer and escorted him to the prison at Duck Lake. Although the steer was later confirmed to have belonged to the Cree, the relentless pursuit of Almighty Voice continued, particularly after he killed a Mounty coming to arrest him. The two-year manhunt which followed was the largest in RCMP history. It ended with 200 soldiers firing on three Cree men, all were killed at the scene, including Almighty Voice and two of his relatives. History records that Almighty Voice’s mother sat on a nearby hill singing her son’s war song and hundreds of local residents watched as the Mounties bombarded them with gunfire.

Martyred, his story must be repeated again and again so that the blood which Canada seems to deny spilling is remembered. Especially now, when Ojibwe on the White Earth and other reservations continue to do jail time for subsistence hunting, we honor Almighty Voice’s memory.

The play unfolds actors as well, as Minneapolis grows into a Native theatre hub. “What makes it really appropriate for our first production is that it’s a play that, for me, is about gaze and narrative… and about who gets to tell what story and how it gets told,” Carr told Minnesota Monthly. As Art Dorman writes in his review, “Marisa Carr was wonderful as the very young White Girl (she claims to be thirteen when Almighty Voice first asks to kiss her), who learns to become a wife and a mother, forced to bear fear and grief that are not a natural part of those life-roles. In act two, she was sassy and animated.”

For the actors involved, Almighty Voice and his Wife is an opportunity to perform a classical work from the growing Native theater repertoire.

Dorman writes, “Ajuawak Kapashesit gave a tremendous performance as Almighty Voice, playful and seductive in his first approaches to White Girl. As he assumed the responsibilities of a husband, strength and dignity seemed to spring from within him, like an inner fire waiting to find its breath. In his vaudeville-like afterlife, Kapashesit in rapid succession conveyed anger, confusion, assent, and a sliver of hope. His solid physical presence and strikingly handsome features drew the audience to him.”

The play was first produced in Ottawa at the Great Canadian Theatre Company in 1991, followed by the Native Canadian Theatre. In this US premiere, director Katherine Pardue wove two distinct acts into a much greater story, using Maxwell Collyards projections of prairies, and Marisa Carr’s costumes, in a sparse stage.

Minimalistic scenes and simple props allowed the actors to carry the complex story. It is full of emotion; from the tragedy to the parody of the tragedy. The second act changes into a musical, through the eyes of a (Native) black minstrel show. This time, reminiscent of the Buffalo Bill, Wild West Shows. Stories it is said, told to Vaudeville music are far more poignant and ease the pain.

Perhaps the closing scene is all that can save your heart. That is the moment when the actors return to speaking Cree; remembering who they are. “Piko ta-ta-wi kisisomoyan ekwo. I think I will go dancing now. Patima Kitchi Manito Waya. Goodbye.” I will remember you now: that I will, Almighty Voice.

My final regret: The play’s run was too short for Minneapolis. I would see it again, easily. I hope the actors and The Turtle Theatre Collective perform the play throughout our region.