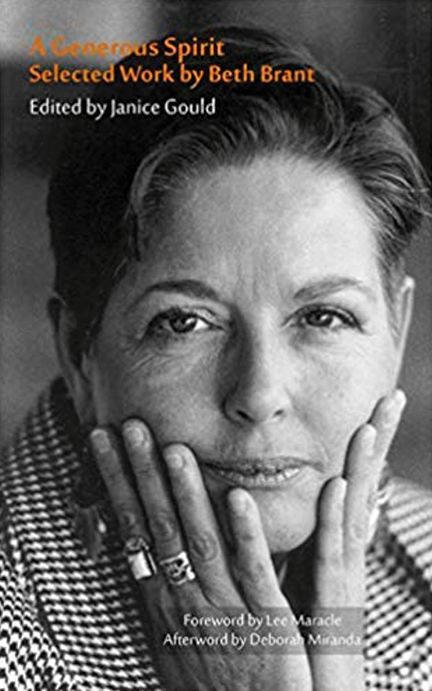 “A Generous Spirit: Selected Work by Beth Brant” (Sapphic Classics 2019) arrived unsolicited in the mail. This never happens. Usually I know what a publisher is sending. What a marvelous stroke of luck that an anonymous publishing house marketer saw fit to introduce Beth Brant via a mail slot.

A member of the Mohawk nation, Brant was a lesbian and writer whose stories equal the best in the canon of American Literature. No, actually, they’re better than that.

That’s a lofty claim, but here is why I was blown away by two of her stories. She wrote with a talent that brought a scene so much to life that after reading it, you’d presume you witnessed it happening. Brant introduced believable characters, compassion, and truth in the way that picks you up from one place and drops you off in another. That’s what really good literature does: it challenges perceptions and makes you change. Your view of the world widens and deepens at a time in our history when so much seems constricted, kicked aside and ridiculed.

About half of “A Generous Spirit” consists of stories, one of them purely whimsical, and half is of essays and presentations. “Coyote Learns a New Trick” describes the seduction between a fox and coyote in a clever way that makes you forget who pursues whom. “Food and Spirits” is a story of pure kindness and goodness and is dedicated to Brant’s dad.

“This Place” has special meaning for those who remember the years of the AIDS epidemic which killed more than 600,000 Americans. In Brant’s story, David who is sick from AIDS, returns home to die. Joseph arrives to have lunch with David, and makes him a special cup of tea. The language is gorgeous, evocative and sweet. Brant uses an interesting literary device, stream of consciousness, which can be overdone by less talented writers.

Here it works perfectly with an ending that will catch in your throat.

Lovely also is “Turtle Gal,” the story of a newly-motherless little girl and the gay elderly African American neighbor who takes her in. We as readers never learn if the old man can pull this off and raise the little girl, but we dearly hope he pulls it off.

Then there’s “A Long Story” which is really two stories about ripping children from their homes. In the contemporary story, a child is removed from the home of her two mothers who are lesbians, and placed by court order with her father. Long story two is of an American Indian boy in the 1890s taken forcibly by government officers from his home to be renamed by non-Indians and work on a farm. The raw, powerful screams of anguish from the parents of these stolen children jumps off the page. The rage may be heard through the decades of time, a horror felt by countless parents of stolen children. It is certainly the same rage felt by migrant parents at today’s southern border of the U.S., the same rage of the 1890s, the same rage of the 1970s. Brant makes the reader understand child stealing in a visceral way.

Her essays carry the same power. One of them skewers the “new age” spirituality with its “ethos of passivity and dilettantism” that views American Indians as artifacts and symbols waiting to be scooped up, inspected and used.

“What kind of movement is it that only encompasses an individual lifestyle,” she wrote. “Where is community in this religion/movement”?”

New-agers made her angry, she wrote, and sad.

“What on earth can heal all those broken people who sincerely look for alternative ways to find wholeness?” she wrote. “I don’t know, but I will suggest activism.”

She took her own advice, becoming active with the National Organization for Women in the late 1960s but withdrawing from NOW after deciding it was for white middle-class women who “hated” lesbians. She started writing professionally at age 40 and died in 2015.