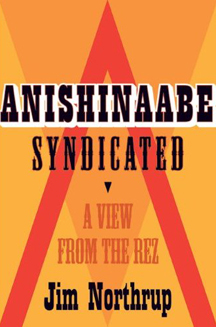 Jim Northrup is somewhat of a folk hero; he tells the stories Natives want to hear from the press, from politics, and from the reservation. He is a remarkable man: story teller, BS'er, poet and performer. He is a character worth reading about and a columnist we recognize. His latest book, Anishiinaabe Syndicated: A View from the Rez, is the third of his autobiographical novels and a thrilling look into the past; a personal history from the viewpoint of reservation life.
From the front lines of fighting for spearfishing rights to the recounting of 9/11, a day he'll never forget (though the story may not be as you might expect), Northrup tells an elder's tale of current events intermingled with personal ponderings between the years of 1990 to 2001.
Northrup is an award-winning Native American author. His column, Fond du Lac Follies, earned the best column of the year in 1999 from the Native American Journalists Association and gave Northrup the writer of the year award in 2001 from the Wordcraft Circle of Native Writer's and Storytellers.
Northrup has written for a number of anthologies and penned the books Walking the Rez Road (awarded a Minnesota Book Award as well as Northeast Minnesota Book Award) and Rez Road Follies: Canoes, Casinos, Computers and Birch Bark Baskets (nominated for the Minnesota Book Award).
Now we have a collection of some of Northrup's best reports from the 'rez, as he calls his home, the Fond Du Lac reservation. The results of his writing are at the same time nostalgic and sarcastic, insightful and irreverent as Northrup asks us to question the world we live in.
As Northrup puts it, "I've heard many questions over the years as I have travelled… people's questions are sometimes silly, sometimes dumb, sometimes cruel. I respond in kind." 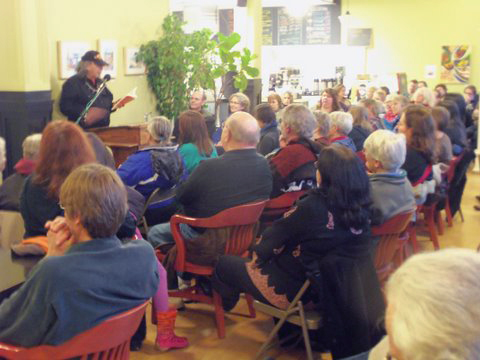 Northrup's style is half historical, half autobiographical. His regular column highlights his life on the 'rez, while Anishinaabe Syndicated delves deeper into some of Northrup's inner reasoning for writing.
In the introduction of the book, we learn that Northrup is a member of the Bear Clan. He is a Vietnam Veteran, a Marine, and a steward of the Anishinaabe language he seeks to reclaim from the institutions that have taken the language from so many of his fellow 'Fonjalackers'.
He carries scars both physical and mental from his time in the service, and as he works now to serve the voice of Native Americans in the press, he speaks of his experiences of harvesting wild rice, boiling maple sugar, or talking to George Carlin backstage.
Because of this year-by-year narrative, it is interesting to see how Northrup can hone in on important issues before the rest of us even know what's happening. For example, did you know that in 1992 Haitians were being held in Guantanamo Bay? While Russians migrated to the states freely as 'political refugees', Haitians were held in detention camps because of their status as 'economic refugees'. Northrup wryly asks if we could apply the policy retroactively, sending penniless 'huddled masses' of pilgrims and Europeans back from Indian land, as he calls the United States.
Throughout the book Northrup is constantly asking us questions. For example:
Q: How did you know he was a rookie ricer?
A: He was using a kayak.

Q: Can Shinnobs (Anishinaabe) move through the woods silently?
A: Only if they pump up their Nikes.

Northrup's mix of the modern lifestyle of the Indian 'rez-goer with the dated and ridiculous image Indians seem stuck with in mainstream culture adds humor to the book while at the same time brings down, brick by brick, the wall that separates Indian people from non-Indians.
Northrup's questions become more poignant, however, especially when it comes to the questions of reparations for Native Americans and the attitudes non-Natives have towards the idea. In Northrup's opinion, we are still waiting on the check for this place we call America, since it was all Native land in the first place.
Not content to wait at the mailbox forever, however, Northrup has outdone himself in Anishinaabe Syndicated. It combines a touch of a lesson to be learned with an excuse to remember the previous decade as no history book tells it. However, this history is distinctly Native American, and Northrup wastes no time in telling us how it is and answering our questions, whether they be silly, stupid, or insightful