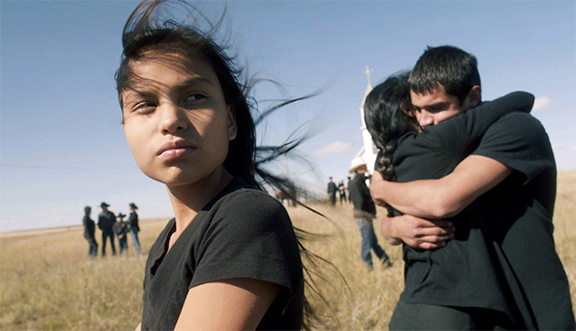 On March 11th The Walker Art

“Songs My Brothers Taught Me,” a quiet story set against the

(Jashaun St. John) and her older brother Johnny (John Reddy). In the

wake of the death of their estranged, bull-riding father, Johnny’s

secret plan to leave the reservation for Los Angeles with his

alcohol reaches an impasse. For all of the reasons he needs to leave,

“Songs My Brothers Taught Me” is

subtile storytelling told through portraiture. Although the story

opens and ends with Johnny’s first-person voice over, the story is

demonstrative and shown, not told. There are no overt explanation

that alcohol is illegal on Pine Ridge, Johnny is warned about “the

protests” and Johnny is beaten, but Zhao isn’t interceding and

offering up a textbook history lesson for her characters’ situation.

The story doesn’t take on the responsibility of educating white

people. This is an important and surprising nuance of the film. So

of offering up explanations and elucidating Natives for an outsider’s

eye. That is because many films about Native people are usually made

for a non-Native market.

In 2002 director Chris Eyre pointed out

a big problem with Natives on film. Native people rented movies but

often didn’t have access to theaters on many reservations. He

premiered his film “Skins” at Pine Ridge from a mobile theater

first… for free. Although many films have been made on or about

Pine Ridge, the Lakota community there had no theater until 2012 when

the Nunpa Theatre (nunpa means two in Lakota) was

opened. A small victory resides in the fact that “Song My Brothers

The film also features some very

capacity for quickly adapting to communities. Her work has been

compared to Terrence Malick for its pacing, quietness and beauty.

But, unlike Malick, who directed The New World (2005) a film

about John Smith and Pocahontas, Zhao created a contemporary

portrait, a deeply thoughtful film that doesn’t perpetuate the idea

that Native people belong to a romantic, idealized past, but that we

Much of the story relies on characters

teetering on the edged of two states. Irene Bedard, the voice of

The New World, plays the role of Lisa Winters, the repentant

alcoholic mother of Johnny and Jashaun. Lisa seeks redemption in

church looking for a heavenly father for her fatherless children,

while Johnny and Jashaun walk the cathedrals of the Black Hills. The

landscape is a character in this film, the tight framing of on the

characters faces in interior spaces is opened up in the instances

where the landscape floods in. This also seems Malick-esque.

Another angle to the inside/outside

community element of this film’s production is that the director,

Chloé Zhao is Chinese-American filmmaker who immigrated to the

United States by herself when she was fourteen years old. She spent

four years making Songs My Brothers Taught Me and

adapting to the community. Many directors hop from community to

community seeing places as slates for films, yet not being fully

vested in any one community. Zhao’s next film may be telling as to

what themes and patterns she establishes over her career, and I look

forward to seeing where she goes from here.