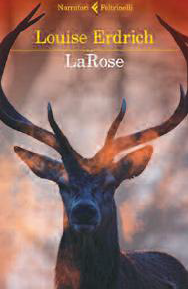 In this spiritually uplifting novel, Louise Erdrich (Turtle Mountain Ojibwe) shows how one family’s sacrifice heals the sorrow of another. When Landreaux Iron accidentally kills his neighbor Peter Ravich’s son Dusty while hunting deer, a great loss falls upon both the Iron and Ravich families. After cleansing himself spiritually in a sweat lodge, Landreaux follows an ancient Native American tradition and gives his youngest – and most beloved son LaRose to Peter and his wife Nola. It’s neither an immediate nor easy solution.

As the Raviches continue to struggle with their loss of Dusty and anger at Peter, LaRose struggles to be accepted by the Ravich’s daughter Maggie who first taunts then accepts him. The Iron family also deals with problems of their own. It’s LaRose, though, who even as a small boy goes on his own vision quest and calls upon the help of his ancestors to help mend the two families. As he tells his new sister Maggie, he’s just not any kid, he has spirit helpers. Maggie and LaRose soon become accomplices in their efforts to keep Nola from committing suicide.

Erdrich masterfully weaves two other strands into the story. One is of the first LaRose, a young Native American girl first adopted then wed by a kind but surly trapper Wolfred. Her remains are stolen after her death, cruelly exhibited, and mysteriously disappear after a break-in. Erdrich also brings into the story Romeo, once best friend of Landreaux, later a ne’er-do-well who was severely crippled when he broke his friend’s fall from a bridge. Romeo has ever since held a grudge against Landreaux a grudge that builds to the point of his wanting to take Landreaux’s life. All three strands join in an explosive conclusion.

Erdrich is the winner of the National Book Award, National Book Critics Circle Award, the PEN/Saul Bellow Award for Achievement in American Fiction and finalist for the Pulitzer Prize.