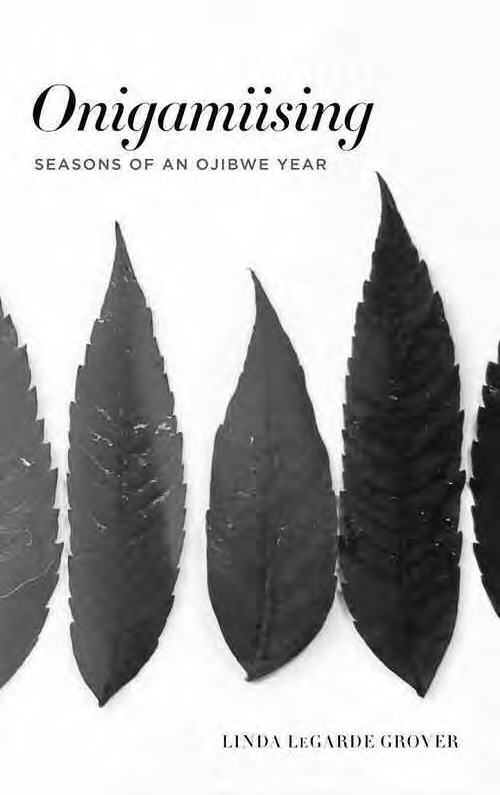 In her book of 50 very short essays originally published in the Duluth Budgeteer, Linda LeGarde Grover gives mini lessons on Ojibwe history, culture and values, as well as a large dose of growing up as an Ojibwe Baby Boomer in Duluth in the 1950s and 1960s.

If what you like is a broad and sometimes squishy overview of Ojibwe life, this mini memoir is for you. There isn’t much that’s new or controversial here, which probably pleased Grover’s weekly shopper reading audience. It seems unlikely that those readers were ready for a radical view on Indian policy and history, policies that still impact the lives of American Indians.

It’s more likely that the Budgeteer audience liked ordinary accounts of a wedding shower, play with a baby buggy, and the making of a ribbon skirt. The book is like a soft blanket of small detail from a woman who knows who she is and where she comes from. She doesn’t want to startle you, she wants to soft pedal a point of view nestled between chapters on sewing, making blueberry dumplings and coming of age in Duluth.

The Ojibwe called the Duluth area “Onigamiising” which means the place of the small portage. Grover’s book, “Onigamiising: Seasons of an Ojibwe Year”, tracks the seasons of a human life, starting with spring for youth and beginnings, summer for youth and young adulthood, and so on. Grover, now a grandmother, writes from the winter season of her life, reflecting on her childhood as the oldest of 13 children, and on ordinary daily occurrences like food preparation. A frequent theme is Mino Bimaadiziwin, which in the Ojibwe language means living a good life. Throughout the essays, Grover does a nice job of reminding readers of basic Ojibwe values, listed as gratitude, modesty, generosity and respect.

While reading the book, however, you may occasionally ask “so what?” Yes, we know that the federal boarding school era was horrible for American Indian families who were forced to send their children to distant schools with the federal government’s goal of assimilation. The historical memory from those nightmarish years mean that many Ojibwe parents especially cherish their children today, Grover wrote. Yet some families were fractured beyond repair. How do they put themselves together again at this time?

Grover, who is enrolled at the Bois Fort reservation, also writes about education often, which makes sense since she is a professor of American Indian Studies at the University of Minnesota Duluth (UMD). She notes that the Indian student dropout rate from high school is still too high, and that it’s great when parents raise their children to value learning. But how do parents do that? She doesn’t really say.

Grover writes that junk food is a bad food choice. But in an era of fast food consumption and no time to cook, how do Indians re-introduce genuine traditional foods into their diet? Late in the book Grover described a job search following a quarter of failed classes at UMD. The experience begs a question.

What does add insight are Grover’s frequent reminders of living a good Ojibwe life, and the importance of gratitude. She wrote: “We understand that everything in our lives has been provided by the Creator, that these blessings have made us rich, and that of course the Creator wants us in turn to be generous with each other. A good Ojibwe is thankful and endeavors to develop a generous spirit.”

Another bright spot: references to Duluth. Those of you familiar with the area will recognize this observation: “Duluth is beautiful: stunningly, breathtakingly, sometimes even achingly, but a lifelong love requires more than a physical attraction. Our love of this place is more than the steepness of the hills with their startling assertions of rock, more than the big lake that changes color and surface under the skies of the seasons, more even than that spectacular variety of the four seasons…A sense of place intertwines time, space, and purpose as well as reason for being.”

She briefly teases out memories of 1950s and 1960s Duluth with references to lunch at Woolworth’s in downtown Duluth, the use of a sticky hair product called Dippity-do, visits to Johnson’s Bakery on Duluth’s West End, UMD’s Tweed Gallery, and the joy of outdoor play as a child.

Grover was the oldest of 13 children; her father was a painter. Those facts beg yet another question: what was that like to be one of 13 kids? Did they eat in shifts? Where did they sleep? Is the family closely knit and how do they stay that way? Perhaps the sign of a good writer is to write enough to leave your readers wanting more.

This book covers a lot of everyday ordinariness and a smattering of Indian history and culture. Its stories are told with a fable-like quality that readers may find appealing.