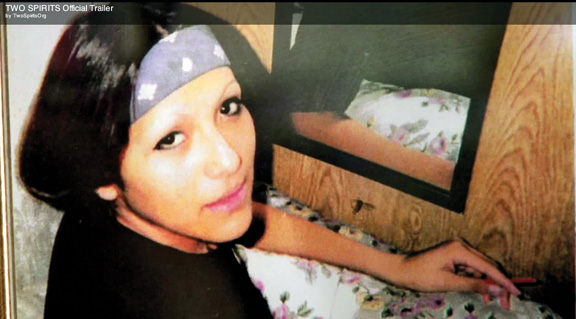 In a remote town, 16 year old Fred Martinez became one of the youngest hate-crime victims when he was brutually murdered a quarter mile from his house. The documentary, Two Spirits, directed by Lydia Nibley, is the tragic story of Martinez, a Navajo boy that was beaten to death because of his gay identity, interwoven with a look at a time in history when Native American culture was not split into solely male and female genders.

In the Navajo tradition, there was also a fourth gender called nadleehi, a person born as a male and as an adult assumed the role of a woman in society. Nadleehi was not uncommon and those who held that position were respected and worked as negotiators, healers, matchmakers within the tribe and when children were orphaned they became their caretakers. This tradition of nadleehi is a position that Martinez occupied and a demonstration of his struggle to follow his Native traditions while being himself.

Martinez embraced two genders, although born a male, he expressed a feminine side but identified as a gay man. Richard LaFortune, director of Two Spirit Press Room, explained how Martinez was standing in the crossroads between male and female and “the place where two discriminations meet is a dangerous place to live.” Therefore, Martinez’s decision to live openly as a gay man with a feminine nature in a small border town was a brave and daring choice.

Mitchell recalls the day when Martinez gathered his family for a meeting to share his full identity with them; "I just wanna tell you this is how I am. I don’t know how you feel about it." Mitchell remembers, “his older brother said to him ‘I’m just gonna tell you to be careful. Take care and watch out.’Those words that he said meant a lot," a foreshadowing of the dangers awaiting young Martinez.

After her son’s warning, Mitchell shared her feelings, "Finally I said ‘well Fred I love you, no matter what, no matter how you are or what people say.’" Thus, with his family’s love and support, Martinez could be himself but not without hardships.

Alongside Martinez’s story are various members of the Two Spirit community, an organization that unites gay and lesbian Native Americans across the continent, speaking about their experiences coming out in a traditional native culture. Many of their families were not as accepting as Martinez’s such as Juanito Becenti, composer, whose parents forced him to burn his scores in a desperate attempt to conform him. Each of these speakers also discuss how they were impacted by Martinez but broaden the topic to native american culture and its acceptance of those who embraced more then one gender.

Eventually, the film returns to Martinez and his tragic death. One night, he went to a carnival that was in town, on his way home Martinez encountered a young man from earlier that night on the road to his house and he began assaulting Martinez with a rock. The attack happened on the side of the road and it was five days before his body was found. The killer had been bragging of the incident and was arrested soon after and sentenced to forty years in prison, thus concluding his story but not silencing it.

The subject of the documentary is a powerful story about gender identity in native culture but Martinez’s story is under developed by the larger topic of the two spirit community and the dissolution of the nadleehi tradition by a combination of colonization, Christianity and boarding schools. Although an important topic and related to the story, the issue, at times, overshadows Martinez’s story and his struggle and many more questions about Martinez’s life and death were raised then answered. However, Fred Martinez’s story is powerful enough to stand on its own and is an example of a fearless youth who was not afraid to be himself, no matter what the cost, a lesson for everyone to learn from and remember.