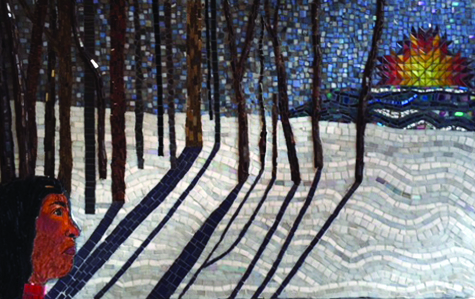 Lori Greene and James D. Autio agreed to do a Q&A on their work as artists and their contributions to the “Bring Her Home” exhibit. Greene is of Choctaw heritage and did a mosaic called “The Escape.” Autio is from the Lac Courte Oreilles Ojibwe Band; his drawing is entitled “Out There.”

When did you first start creating works of art? Which mediums do you work in? Have you had formal training?

LG: I am not sure how long I have been an artist; my father encouraged me, but I wanted to be a doctor. I ended up going to art school to study textiles; it felt like my strongest connection to my ancestors, both Native and African. After college I began beadwork, went to graduate school for art and continued doing bead work there. I took up mosaic, working mostly with found, salvaged or dumpster materials. I mainly work in glass or ceramic mosaic. I like the metaphor that mosaic lets you rebuild something that was broken. I prefer to work with materials that are not beautiful on their own. It’s the rebuilding that makes them beautiful.

JA: I have always considered myself to be an artist. I grew up in a family of artists and most of my siblings continue to do various creative arts as adults. I began writing poetry, and that became my primary vehicle of creativity. I continued making art: acrylic painting, woodcuts, sculpture, and Ojibwe arts such as pipe carving, pouches, beading, and making musical instruments. For several years now I have done large charcoal drawings on grocery bags, taped into large sheets, and acrylic paintings on journal covers. I received a BA and MA in education from Hamline University.

What attracted you to the AMR show?

LG: It is my story. I was both repelled by and drawn to the show. I knew I needed to apply.

JA: Several of my charcoal grocery bag drawings were included in the “On Fertile Ground” show at All My Relations Arts. I saw the call for artists for the current show and knew I had to submit some work. I felt motivated to create new pieces specifically for the show and one was chosen, an ink and gesso drawing on paper.

Do you have a personal connection with the exhibit’s theme? What is it? Did that connection make it easier to create a work of art, or more difficult?

LG: When I was 16, I went winter camping with two friends at Grand Portage reservation, with the intention of snow shoeing the trail. I was kidnapped away from my friends at gun point. I believe, and have always felt, I could have been a missing or murdered women. I believe that making art is a healing process even if it is a painful subject. The sun and Lake Superior are extremely important memories of my survival. After I escaped my kidnapperrapist, I saw the sun and the lake together – they were so incredibly beautiful – and I knew if I could still see and feel beauty, I could survive.

JA: “Out There” is a drawing in ink and gesso on paper. It is based on a photograph taken by my sister, Bette Autio. In Bette’s photo, I walked on the railroad tracks at Grassy Point in the bay between Duluth and Superior. The cold desolation of the open landscape felt like the Dakotas. I had been drawing images of Olivia Lone Bear who disappeared on Oct. 24, 2017. Her family and friends continue to search for her. The search for Olivia had been on my mind a lot. The drawing became about the desperate isolation and vast uncertainty of searching for a missing loved one.

How do ideas come to you?

LG: Sometimes my ideas for art come from dreams. Those feel like a gift and often are my best pieces. I also do a lot of research, especially when I am working on a commission.

JA: Usually one thing influences another. Playing a new song on the guitar will make me think of something I’d like to try to do in charcoal. While writing thousands of poems, I have also spent years working with young readers. How could those things not affect each other? I spend a lot of time online, connecting with people through social media and watching YouTube videos. All of that changes the way I look at things when I go out walking the Minneapolis bridges with my camera.

James, why do you show the man walking away?

JA: When I made the drawing, I felt that the man was a brother, boyfriend or father of a Native woman who was likely the victim of violent crime: beaten, raped, murdered, who knows what. Though the chance of a happy resolution to the disappearance is highly unlikely, the man will never stop looking for her. He will always hold on to hope. He will always love.

LG: Our people are living in trauma following colonization, genocide, racism, misogyny, and many of our stories, beliefs and languages have been stolen from us. There remains so much desperation and loss of self-worth. It is so complex, so devastating. The man who kidnapped me was also Native, I tried to reason with him, and told him that we are the same people. Do not do this to your sister. In so many ways, because he was Native, it hurt me far deeper then had he been white. I wish I could really answer this question. It has plagued me most of my life.

JA: That’s a complex question. Many things are happening simultaneously. As Native people, we are living in a larger society that ignores, demeans, and undervalues us. Issues with chronic poverty, lack of opportunities, diminished access to education and resources, pervasive disrespect, and generalized indifference to the needs of Native communities leaves many of us feeling demoralized and severed from our spiritual base, which is family.