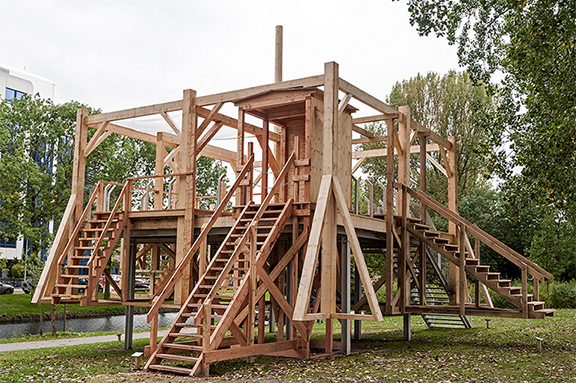 Hippocrates once wrote, “Healing is a matter of time, but it is sometimes also a matter of opportunity.” In Minnesota, time has failed to heal an old wound. In 2018, we have an opportunity for healing that we must not squander.

In December of 1862, thirty-eight Dakota warriors judged guilty of participating in the Dakota conflict were hanged in Mankato in a mass execution. Three years later, two additional Dakota were captured in Canada and returned for execution. This last December, as they have since 2005, contemporary Dakota rode horseback 330 miles in frigid weather from South Dakota’s Lower Brule Indian Reservation to Mankato in the “Dakota 38+2 Wokiksuye Ride.” They rode to honor the 40 warriors who were executed, to promote reconciliation with non-Native peoples, and to promote healing from historical trauma.

Earlier in 2017, the Walker Art Center purchased and erected a sculpture modelled in large part after the scaffold used in the Mankato hangings. Protests followed and the sculpture was dismantled. The memorial ride and the Walker’s Scaffold incident orbit the 1862 mass execution. Importantly, the ride and protests reflect an issue more significant than the events themselves: our collective failure to acknowledge and learn from the historical trauma suffered by the Dakota and the multigenerational impact of those experiences.

As a privileged, Caucasian male, it is impossible for me to internalize the experiences of American Indians, African Americans, or the many other communities which have been persecuted in one way or another over the last five hundred years. I can only stand in awe of their cultural resiliency and try to understand. For this reason, I feel compelled to bring attention to the Dakota’s historical trauma because a rare opportunity is slipping away.

In May, Olga Viso, then director of the Walker, said the institution was “deeply, deeply sorry” for their failure to consult with the Dakota before erecting the Scaffold. The Walker was said to be ready to move forward. Reports and commentary about the incident leave one with the impression that the Walker purchased and erected a sculpture which offended the Dakota, removed it, apologized, and passed ownership of the Scaffold to the Dakota. A September report in The New York Times noted that the sculpture was to be dismantled and buried in an undisclosed location. Case closed?

Hardly. The Scaffold exposed an old wound that has festered since long before 1862.

“Historical trauma” refers to the long term cultural impacts of traumatic events which, in this case, were direct attacks on a culture. Although school curricula often give scant attention to them, we should all know the litany of grievances: land stolen, people massacred, languages prohibited, children shipped off to boarding schools, treaties broken, lives uprooted, personal and social identities disparaged. These offenses, and more, were inflicted on individuals, families, social groups, and the culture itself. The very foundations of people’s lives were ripped asunder. Over the years, children, grandchildren, great-grandchildren, and great-great-grandchildren have been dealing with the consequences: disintegrating family and social structures, lost support networks, self-doubt, and wide-spread despair. In addition to this complicated dynamic, there is a maze of broken promises, ineffective or outright hostile policies, and social, economic, and often geographic isolation.

Given this history, outrage is not a surprising response when a sculpture is erected which memorializes the execution of the Dakota’s ancestors.

There are many reasons for them to be angry, but few Dakota hold contemporary non-Natives personally responsible for the actions impacting Indigenous people over the centuries.

At the same time, public acknowledgement and discussion of their traumatic journey to the present would be welcomed, would be a first step toward healing. Last spring, many Dakota believed the Walker’s decision to “move forward” would involve just such a dialogue. The Walker, after all, is an important public institution, one well-positioned in the community to initiate such a dialogue of reconciliation. Ironically, the Scaffold provided a platform from which they could do so.

The Dakota’s winter ride was intended as an act of reconciliation with main-stream Minnesota. It is my fervent hope that the Walker will seize the initiative to promote healing the old wound of historical trauma and not let time consume another opportunity.

David O. Born, Ph.D., has been a faculty member at the University of Minnesota since 1970. He chaired the American Indian Studies department from 1993 through 1996.

Erdrich’s “The Sentence” is a winner