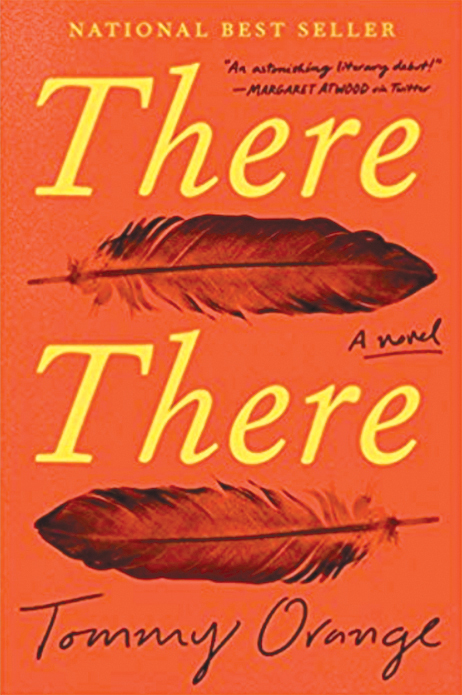 How did he do it? How did Tommy Orange (Cheyenne/Arapaho) pack a thousand small and large details of contemporary urban Indian life into one book? But they’re more than details! The novel, “There There” tackles American Indian urban life from within and from without through the lives of 12 Oakland, California Indians who at the story’s end, converge at a big powwow.

But the book is more than little life stories. The pages of well-put words convincingly describe complicated, brilliant, sometimes addicted and violent, sometimes gifted and usually conflicted people who are American Indian. Orange provides a prologue and interlude with historical and cultural background that suggest the “why” of what happens. His diverse multi-generational glop of humanity step off the pages and get into your head in a way so mystifying and effective that you’ll worry about their fate, all the while knowing that they’re fictional.

That’s because a few of the characters will remind you of people you know, the headstrong grandma, the three brothers always horsing around, the great auntie, the “uncle” who you’re not related to, the cousin who won’t leave his mother’s basement, the custodian. Orange’s snips of history sort of explain the despondency or hopelessness his characters feel while at the same time, not one of them is allowed to couch their choices with excuses.

The prologue starts with a swift kick from history, reminding readers of the violence and genocide rained upon Indians, and the ongoing white-wash of what happened.
Orange writes, “We’ve been defined by everyone else and continue to be slandered despite easy-to-look-up-on-the-internet facts about the realities of our histories and current state as a people…All the way from the top of Canada, the top of Alaska, down to the bottom of South America, Indians were removed, then reduced to a feathered image.”

The stinging essay is followed by fictional accounts of the 12 characters, starting with the heartbreaking Tony Loneman, 21, who has fetal alcohol syndrome. Because of FAS, his facial features are deformed. He doesn’t drink alcohol; he figures he got enough of that while in his mother’s womb as a little tadpole thing, hooked up to a cord, floating. To make a living, he sells weed.

Stronger characters take center stage, like Opal Viola Victoria Bear Shield who, with her mother and sister, occupied Alcatraz in the late 1960s. A USPS letter carrier in later life, she cares for three grandsons while imagining what retirement would be like.

My favorite character is Edwin Black, the internet addict who rarely leaves his mother’s basement. He has spent 20 hours of a 24 hour day in front a computer screen, to his mother’s dismay.

Edwin reads a lot online, but comes away from it with nothing, he says, “This is how time skips. Links just lead to links that can lead you all the way back to the twelfth century… There’s almost too much information out there. The internet is like a brain trying to figure out a brain. I depend on the internet for recall now. There’s no reason to remember when it’s always just right there, like the way everyone used to know phone numbers by heart and now can’t even remember their own. Remembering itself is becoming old-fashioned.”
Contrast Edwin with Bill Davis, an elderly custodian at Oakland-Alameda County Coliseum where the doomed powwow takes place. Bill has a long-term relationship with Edwin’s mother, and while he works he thinks about her “man-boy son.” He can’t stand the way kids turn out these days. He thinks they are coddled babies, with no trace of skin, no toughness.

According to Bill, “There’s something wrong about all of it. Something about the ever-present phone glow on their faces, or the too-fast way they tap their phones, their gender-fluid fashion choice, their hyper-PC gentle way of being while lacking all social graces and old-world manners and politeness. Edwin’s this way too.”

Even with Edwin and Bill’s oppositional views, the book is about far more than generational conflict. Ambivalent at times, crystal clear in others, Orange takes us on a roller coaster ride through contemporary Indian city life, often holding up a mirror that’s hard to face.

The book’s structure is fascinating and required note taking to keep the dodging/weaving characters straight. Each chapter offers insight, like this offered by Grandma Opal to her grandson. Opal was openly against any of the children doing anything Indian. She believed Indianness was something they could decide when they were older, like drinking or driving or smoking or voting.

Her grandson Orvil challenges Opal. She replies, “Learning about your heritage is a privilege. A privilege we don’t have. And anyway, anything you hear from me about your heritage does not make you more or less Indian…Don’t ever let anyone tell you what being Indian means. Too many of us died to get just a little bit of us here, right now, right in this kitchen. You, me. Every part of our people that made it is precious. You’re Indian because you’re Indian because you’re Indian.”

Read this book. Its characters and its fury will remain in your mind for a long time.