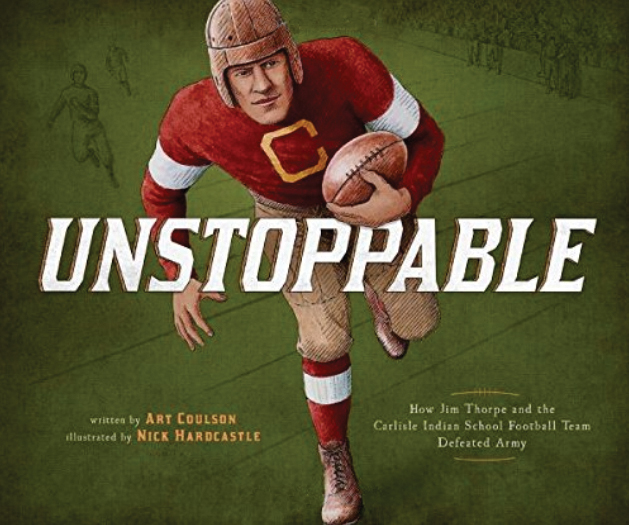 In his new children’s book, “Unstoppable,” Apple Valley writer Art Coulson (Cherokee) captures the 1912 excitement of the win of a talented American Indian team from Carlisle Indian Industrial School that faced off against the West Point Cadets.

Disclosure: I don’t like football and have never sat through an entire game. Probably never will. But this book not only makes me wish for a trip through time to that place on that day in 1912, but I want to know more about Jim Thorpe. The best children’s books do that: entertain both the reader and the read-to, and spark new interest. The book aims for an audience age 6-10, but will appeal to readers of all ages.

Strong, intelligent and disciplined, Thorpe excelled at baseball, lacrosse, hockey, football and track. Coulson described Thorpe’s first encounter with a high jump bar that was taller than he was. The boys at practice on the field laughed when Thorpe said he wanted to jump the bar. Nonetheless, he borrowed track shoes and – you guessed it – cleared the bar on his first try. The boys weren’t laughing any more.

Thorpe was called into the coach’s office where he thought he had done something wrong. Instead, he had broken the school high jump record that day. Coach Warner said he’d see Thorpe at practice the next day.

Coulson’s description of the first jump was just right. Not too long and not too short. He did the same with the big game against the West Point Cadets, where just 20 years earlier, the fathers of the Cadets and the fathers of the American Indian team had fought in war. Coach Warner told his players that a win against the West Point Cadets would make them true warriors.

And it did. It was here in the story that I longed for the time machine glimpse of what happened, and imagined the roar of the crowd and the delight of American Indians throughout the country at the symbolic win: Carlisle 27, West Point 6.

Coulson wrote that Carlisle played: “a new kind of football. The small, quick team did not rely on strength. The players used their speed and their brains to win. They invented plays, like end runs and reverses, that had never been tried before.”

The story of Thorpe’s win of Olympic medals in an afterward also conveyed the breadth of Thorpe’s talent and spirit. Coulson didn’t go into detail about Thorpe’s loss of the medals due to paid play on a baseball team. His focus was the evolution of an elite athlete who had a hard start in the era of forced assimilation.

The story could have recounted all the injustice and atrocities toward Indians at the time, but Coulson is selective in his depiction of Thorpe. The reader is left first with the impression of athletic greatness won by talent and intelligence. If that example inspires today’s young American Indian readers to reach for the stars even if they, like Jim Thorpe, are shorter in stature, well, good.

You can buy an autographed copy for $16 plus shipping from the author’s website (artcoulson.com) where you’ll also find his first book, The Creator’s Game: A Story of Baaga’adowe/ Lacrosse, published by the Minnesota State Historical Society Press in 2013.