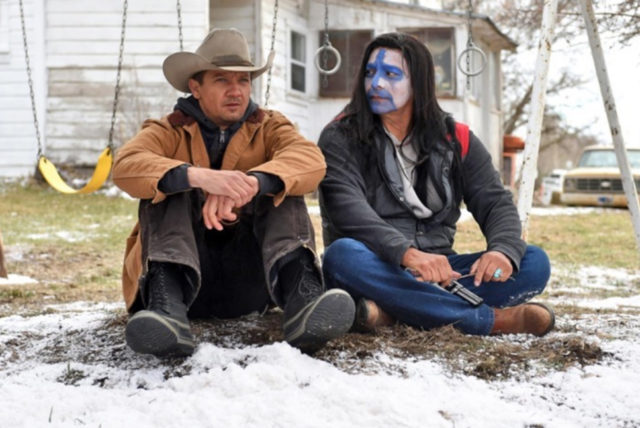 Any art form that brings violence against American Indian women into a harsh light brings everyone a step closer to eradicating that violence. Last month The Circle newspaper included a review of “Bring Them Home,” an art show at the All My Relations Art Gallery in Minneapolis that focused on murdered and missing American Indian women.
As a follow-up to that exhibit, I watched the movie “Wind River” again, this time via DVD. It’s a story about an Arapaho woman who dies following rape on Wyoming’s Wind River Reservation.

In my view, the best movies combine a fast-moving plot with great scenery and sets, superb writing and acting, and a sense of reality. “Wind River” is that kind of movie. Like the art exhibit, it’s hard to take in places but if facing the truth of violence is hard for an observer, imagine what it’s like for the recipient and the people who love her.

The truth of violence is this. Eighty percent of American Indian and Alaska Native women have known violence in their lifetime, according to a frequently-cited 2010 National Institute of Justice Study. More than 55 percent have experienced “sexual violence.” No statistics exist for the number of missing American Indian women.

Those numbers, or lack of numbers, provide the backdrop to “Wind River.” The movie is set on the sweeping, starkly beautiful 3,500-square mile reservation which is home to the Northern Arapaho and Eastern Shoshone tribes. The opening scene shows a young woman, Natalie, crying and running through snow at night.

She falls, and is discovered frozen to death days later by a game tracker, Cory (Jeremy Renner). Cory’s daughter was murdered on the Wind River Reservation. An FBI agent from Las Vegas arrives to lead the investigative team which includes Cory and Ben, the tribal police chief played deftly by Graham Greene (Oneida).

The agent, Jane (Elizabeth Olsen) is clueless about Wyoming’s harsh winter storms and the lack of police resources on the reservation. During their investigation, Jane, Cory and Ben approach a meth house and Jane suggests that it’s time to call for back-up.

“This isn’t the land of back-up, Jane,” Police Chief Ben replies, not unkindly. “This is the land of ‘you’re on your own.’”

While on their own the three narrow down suspects which leads to a somewhat weird stand-off and then a weird shoot-out. We learn who did what via a violent flashback to the night of the rape. The subtext to the movie is the impact of the murder on families: Natalie’s mother’s raw anguish, Natalie’s father’s rage, and Cory’s ongoing grief about his daughter. Natalie’s father, Martin Hanson, is played by Gil Birmingham (Comanche).
The death sheds light on the real-life tangled criminal jurisdictional issues on all reservations, as well as the lack of adequate police protection. Director and screen play writer Taylor Sheridan lived on the reservation while writing the script. That immersion led to a movie with well-written dialogue blended into a difficult narrative set in an unforgiving place. In this world, a fast-breaking blizzard cloaks all evidence and spring always arrives later than anywhere else.

If the outer environment can be violent, the inner environment is worse. In one scene Cory asks a young Indian man why he made the choices he made. A miserable life at Wind River wasn’t inevitable: the young man could have gone to college or into military service, Cory says. Instead of leaving, he chose the downward spiral of drug addiction and poverty. Why? I’m not sure anyone on the other side of the movie screen has an answer to that question, either.

The least believable aspect of the movie was a note at the beginning that the plot was based on actual events. Yes, real murders and lesser forms of violence occur on the Wind River Reservation and all reservations. And yes, Indian women disappear and no agency or bureau keeps tracks of their disappearances.

However, if a shoot-out of the magnitude shown in “Wind River” ever took place, news outlets throughout the world would carry the story. In an interview with National Public Radio in 2017, director Taylor Sheridan said that the movie was based on thousands of actual stories just like it. He said that his purpose was to shed light on the “epidemic of violence” on reservations, an epidemic that needs attention and addressing.
In spite of the Hollywood shoot-out, he does that, and he does it well.