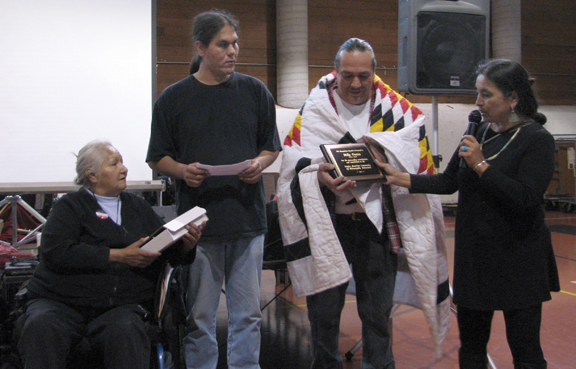 A benefit and feast was held on September 22nd in the Minneapolis American Indian Center (MAIC) in Minneapolis to honor Mike Forcia for his tireless efforts in helping feed the homeless. The event brought together over 100 members of the Native American community. Young and old alike could be seen sitting together enjoying fried walleye, wild rice, hot-dish and fry-bread, all courtesy of the cooks and community members who wanted to show Forcia their appreciation.

Forcia (Bad River Ojibwe) has always placed an emphasis on public service. Starting with a fatherly interest in his children’s educational welfare, Mike has worked with the Minneapolis Public Schools to help raise awareness of Native student’s special needs.

This interest in the welfare of those around him translated into an ability to identify some of the special needs of the Native community at large.

Looking out the window of his own cafe on Franklin Avenue, Forcia saw an opportunity to help the homeless using the resources of his very own diner, The Wolves Den.

"Back in 2005, Wade Keezer and I decided we wanted to find a way to help feed the homeless. Along with our friend Kevin Oberdain, we began to feed the homeless using the resources of my Cafe. We called the breakfasts Oyate Oshkabaywis. This is essentially two words from the Dakota and Anishinaabe languages that we put together into one name, meaning ‘helper’ in both languages," Forcia said.

The Wolves Den is one of the only places in the city to grab a piece of real, Indian-made frybread. Described as the home of lone wolves and pack eaters alike, Forcia has enjoyed running his own business for many years on Franklin Avenue.

"Originally what we would do is make the food and bring it out to homeless elders, but when we relocated the business to inside the [Minneapolis American] Indian Center we wanted to bring with it a community atmosphere. So now the homeless are invited inside; we feed them and give them a good meal. We help them out in whatever way we can; whether that’s a spare smoke, a clean pair of socks, or just a hug," Forcia said. "Whatever they need out there, we try to help them."

His tireless efforts to help the homeless and needy are just part of the reason why the surprise feast/benefit dinner was held in his honor. "I heard that there was something planned but I never expected anything like this," Forcia said as the crowds began to line up for fried fish.

The benefit included many events, including an honoring song, and live entertainment by the Red Ponie Band. The highlight of the night, however, was the recognition of Forcia and the work he does for those around him.

With everyone enjoying their meals, members of the committee that organized the benefit called for Forcia to come to the stage and receive his awards. Forcia humbly stood between his fellow colleagues as they presented him with a plaque commemorating his service to the community, and a star quilt blazing with red, white and black diamond patterns.

Frances Fairbanks, Carol Littlewolf, Juanita Espinosa, Wade Keezer, and Murphy Parkhurst were all members of the committee that organized the benefit. Keezer, speaking on behalf of everyone in the room, asked Forcia to say a few words to the audience seated before them.

Forcia thanked everyone who was present and everyone who couldn’t make it but still helped in some way. "I appreciate what everyone has done for me here. Thank you and mii-gwitch!" Forcia said, waving to the crowd as they stood up to clap for one of their community’s most selfless workers.

Forcia is a friendly and approachable personality on the streets of Franklin who has well thought-out views on the way he goes about community service at the MAIC. "You know, I never did any of these things by myself; I don’t know if any one person could do all this volunteer service by themselves. Every Sunday when we do breakfast for the homeless, there is always someone there to help, always someone else coming to volunteer. For my part, when I volunteer, I always try to volunteer my friends and my family as well. I try to share what I do with as many people as I can," Forcia said.

Recently Forcia was elected as chair to the American Indian Movement (AIM) chapter in Minneapolis, and has devoted his time and energy to organizing the newly formed board. "We’re going to let the community set our agenda," Forcia said. "Our overarching goal is to serve our community, and when we have our board’s first meeting we’re going to reach out to people within our neighborhoods and ask what we can do to help."

For example, AIM hopes to work in the future to prevent youth violence, as well as support the role of elders within the community. Forcia doesn’t believe elders get the respect they deserve in mainstream culture, and he says that in Native culture, respect for one’s elders is very important.

"There are elders who have been sent away to nursing homes when they are one of the most important parts of our community. We need to find ways to retain and care for our elders," Forcia said.

Forcia plans on having AIM meetings at one o’clock on Sundays after the Homeless Breakfast. "We’re hoping to bring the community together by helping wherever we can," Forcia said.

Forcia helps his community in smaller, harder to recognize ways as well. For example, if someone needs gas money for a funeral, or a bus fare to get to work, Mike is sure to find a way to help. Though Forcia will be the first to admit times are tough, he believes that shouldn’t stop volunteers to continue to work for the people around them.

"With AIM, I think we can create a culture of small favors, and that can begin to become more widespread. We want to bring back what AIM was meant for; serving people with volunteer efforts," Forcia said.

The feast and benefit was also the start of a new fundraising effort to help raise money to feed the homeless, something that has mostly come out of Forcia’s own pocket.

Raffle tickets were sold to help raise money for the new fund and items raffled off included a hand made quilt and wild rice/jam gift baskets (donated by Northland Visions).

Donations to help feed the homeless at the Oyate Oshkabaywis breakfasts can be sent to Woodland National Bank, 1113 East Franklin Ave, Ste. 108, Minneapolis, MN  55404. (Be sure to let them know it’s for the "Oyate Oshkabaywis fund".)