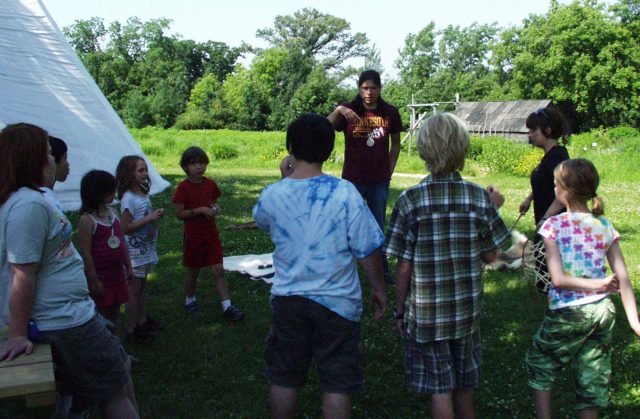 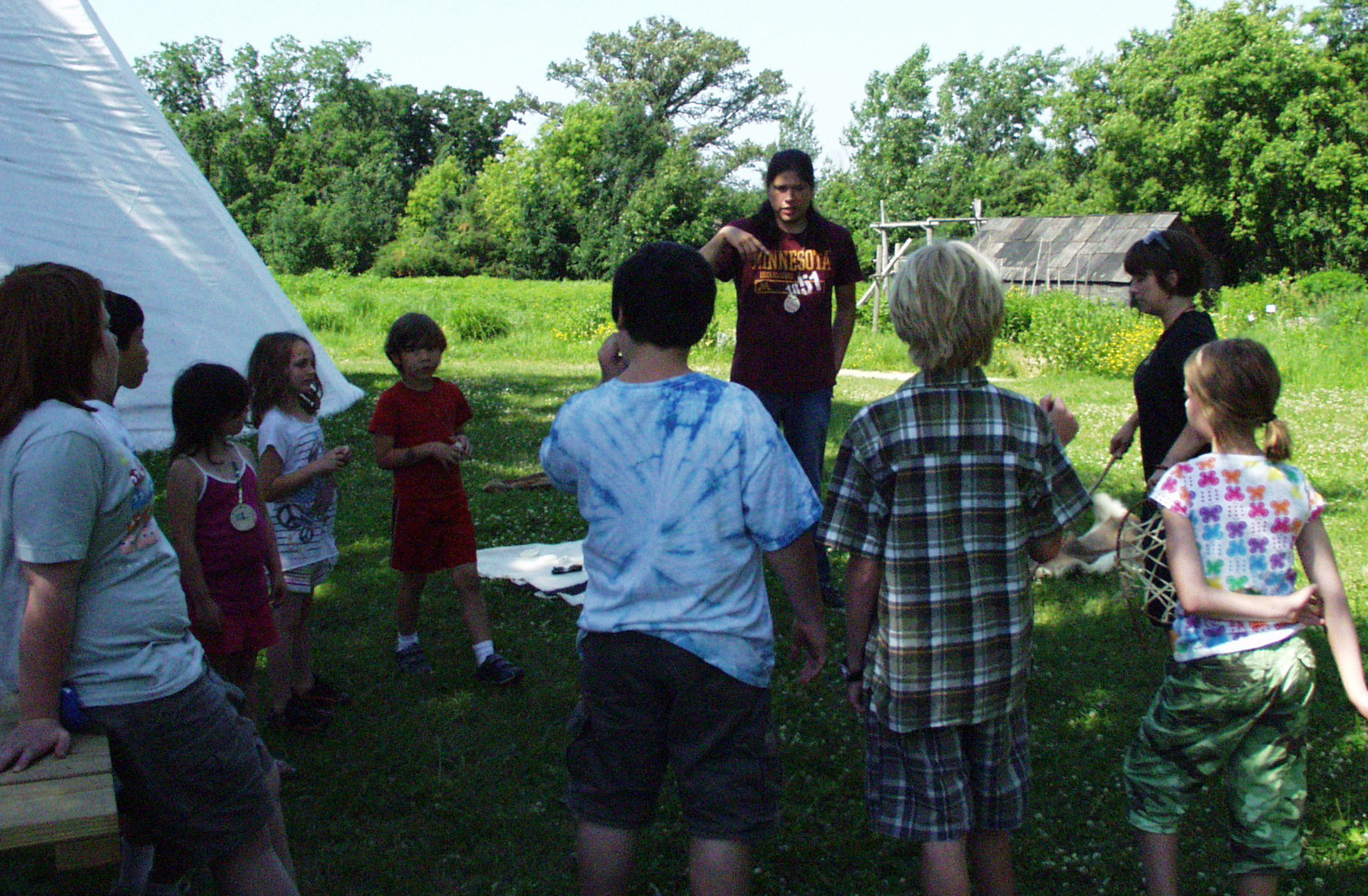 he Gibbs Museum hosted a their first Dakota Language camp for youth grades 1st through 4th this summer from June 27th to July 1st. During the week-long camp students enjoyed seasonal themes as they learned about the life of the Dakota people who walked the trails of the museum’s grounds, and were introduced to a language that is not usually taught at elementary school levels.

The Gibbs Museum was opened in 1954 under the Ramsey County Historical Society (RCHS). Listed in 1974 under the National Register of Historic Places, the museum has worked closely with the University of Minnesota’s Dakota language program.

Located next to the University’s soccer fields, The Gibbs Museum is a picture of 19th century life. There are traditional Dakota bark lodges and tipis at the site, as well as the excavated sod house, or ‘soddy’ that Jane and Heman Gibbs lived in. The area is covered by prairie grasses, and native crops such as corn, squash, and beans dot the fields.

"This museum focuses on place history," said Terry Swanson, a historian who has worked with the Gibbs Museum for five years. "When Priscilla Farnham (RCHS Executive Director) came to this site, we weren’t really telling the story of Jane Gibbs. After studying the history of this place, she thought we needed to focus on how important the people and the history of this land they lived on really were. I think that’s at the heart of what we do here."

The story of the Gibbs museum began in 1835, when Jane DeBow (eventually Jane Gibbs) moved west with a missionary and his wife. They settled near Lake Calhoun, where there was a band of Dakota living on the shores of the lake. The settlement she grew up in was Cloud Man’s village.

At the time there were only about 100 white settlers living in or around Fort Snelling, mostly men in the service. Jane, living next to the Dakota village, spent much of her time with Dakota people. She learned their language and traditions.

"There was a kinship there, and for the Dakota people, kinship is everything," Swanson said.

In 1839 the missionary family moved away, and Jane was forced to follow. Going back east, she was eventually married to Heman Gibbs, but she was able to convince Heman to move back to Minnesota in 1849.

They bought a parcel of land, not knowing the land they had bought lay on an old Dakota trail. Jane met with some of her old friends from Cloud Man’s village and invited them to come visit their farm.

"To us this sounds like the courtesy we would extend to any old friend," Swanson explains, "but for the day Jane was being really forward-looking in trying to foster this friendship she had from long ago, ignoring the prejudice and remarks of other pioneers. This relationship of hers to the Dakota people was quite shocking at the time, but it was also unique."

Now, the Museum is used to interpret the crossing of pioneer and Dakota life. One of the most important ways to understand a culture is through its language, and the Gibbs Museum works to bring this kind of understanding to its visitors.

"We’re using language to help explain and understand culture. For instance if you say ‘hello, my relative,’ in Dakota, you can say it to your cousin, your neighbor, to a tree, to an animal. The idea is that we’re all relatives, we’re all related. That’s a powerful message to talk to our kids about."

"This summer we’re offering a pilot program; working with University of Minnesota language department. All along the way we’ve had a Dakota advisory board, we’ve worked with those knowledgeable in the language. We want to properly represent this culture," Swanson said.

Neil McKay (Cantemaza) and Joe Bendickson (Sisokaduta) are the U of MN Dakota language instructors the Gibbs House is working with on the program.

Despite the care and effort that is taking place to educate children during the summer camp, Swanson realizes there are limitations.

"We can’t teach the language in a week. It would take many years of instruction to do that. However, along with our first ever language camp, we’re working closely with the University of Minnesota Dakota Language Department so that we can not only teach Dakota for a week, but show that the resources are out there for those who want to continue studying the language," Swanson said.

The Dakota language is a language in peril. There are only nine or ten people left in the world that speak Dakota as their first language. Aware of this problem, Swanson explains the role of the Gibbs Museum in helping to preserve history and culture.

"We try to interpret the life of the Dakota people through the eyes of Jane Gibbs. We use primary sources to illustrate the history we tell here. Dakota life can be read about in missionary’s journals and seen in the paintings of Seth Eastman. These sources aren’t perfect by today’s standards, but on this farm was an unusual level of tolerance for the times, and we try to reflect that in our museum," Swanson said.

Eventually, the residence of Jane and Herman Gibbs was not only home to their five children, but the seasonally travelling Dakota people Jane had known her whole life. Jane Gibb’s name in Dakota translated to ‘Little Bird that was caught’, because the Dakota people, after hearing her story, likened her to a bird that had been taken away from its nest.

The Gibbs Museum is meant for all visitors. Thousands of kids visit annually to learn about Dakota life and language, and the presence of a language camp promotes growth for future programs.

"Language is very important. I think working here I get to help be a part of that effort that is trying to revitalize the Dakota language in our youth and that is something special," said Swanson.

The Gibbs Museum also offer other youth/Dakota related activities (see list below). They are located at 2097 West Larpenteur Avenue, Saint Paul. The museum’s hours are Tuesday through Sunday, noon to 4 p.m. For more info, call 651-646-8629, email: terry@rhcs.com, or see: http://www.rchs.com.

For youth and children

Boys discover traditional life of the Dakota through hands-on activities and games. This journey will take campers back to a time when Dakota boys hunted for game and traded for goods at the trading post. Boys will also enjoy a Dakota feast and play authentic games. Dates/Times: This one-day program is offered Fridays, August 5, 12, 19, 26, from 9 a.m. – 1 p.m.  For boys ages 7-10. Cost: $39 includes all materials and supplies. We will provide snacks each morning, lemonade and water as well as the Dakota feast.

Wednesday morning mini-camp experiences for children ages 4-6 focus on pioneer and Dakota life. Each class offers a different activity and a project to make and take home.

o August 3- Life on the Farm: Animals and Gardens