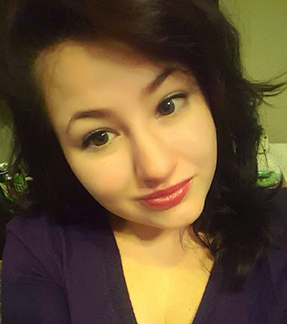 The first thing Michaela Maldonado had to do was claim her heritage. That wasn’t so easy. When she was little, she knew that her grandpa on her mom’s side was half Native American – a member of the Ho-Chunk Nation. Her dad’s side cherished its Latino roots, and Michaela didn’t find out that she had a Cherokee great-grandma on that side until 4th grade. “My dad’s family, they were old fashioned,” she says. “Back in their day Native people were looked down on and they kept that belief.”

When her school closed and she moved to an American Indian magnet school, Michaela began to explore Ojibwe traditions and language. She loved it. But she was also confused. It seemed like kids identified as one thing or another – white, black, Latino, Asian, or Indian. But she looked white and had a Latino name, so how could she be Native American?

In 7th grade Michaela took a school trip to Fon du Lac, as part of her program’s Native American Quiz Bowl team. It distressed her that some of the kids didn’t think she’d embraced her culture – she was too new. That’s when she went to talk to her grandpa.

He told her it didn’t mater what they thought. What mattered was what she did. It was up to her to own Native American identity, and that happened by following the traditions. “Don’t let other people’s stereotypes get in the way,” he said, “just prove them wrong.” She’s been doing that ever since.

One stereotype that bothered Michaela was that Native kids don’t do well in school. That just made her determined to try harder, to prove people who thought that way wrong. Now she’s at the top of her class. And she knows who she is, because following the traditions is a big part of her life.

Michaela doesn’t buy the stereotype that Native culture is primitive or savage – even though that’s the impression she got from some of her history books. “American Indian cultures are just as complicated as any other cultures – including western cultures,” she says. And the Native way of looking at the world can give a lot to mainstream culture.

For example, Michaela’s textbooks said that Native peoples under-utilized the land. She knows that’s wrong. They’ve always managed the earth’s resources, but in a respectful way, giving thanks and never taking too much. If western culture were like that, we wouldn’t be facing pollution, environmental destruction, and climate change.

In high school, one of Michaela’s friends told her about Postsecondary Enrollment Options (PSEO). She was astonished to learn that she could get college credits for free, while also earning high school credits in the same course. Some of the classes she took through PSEO also opened her eyes. College history courses were different. They told the American Indian story more fully, and from the Native point of view.

PSEO is just one kind of dual enrollment option provided by the State of Minnesota. AP (Advanced Placement) and IB (International Baccalaureate Program) are perhaps more well-known. But, in AP and IB, earning college credits comes down to scoring well on one test, on one day. In contrast, PSEO courses count all the assignments and tests throughout the course in the final grade. And most PSEO credits are highly transferable.

All Minnesota public colleges and universities (and many private ones) accept PSEO students – for free. And colleges can accept or decline AP and IB credits, it’s not a done deal. That’s also true of the two state-provided programs – PSEO, and Concurrent Enrollment or College in the Schools (CE/CIS) – but they’re more likely to be accepted by MN public colleges and universities (and even private colleges), as they’re earned through those institutions in the first place. Many PSEO credits will automatically transfer to all MnSCU colleges.

For Michaela, the combination of American Indian Studies and PSEO helped her along her chosen career-path – while still in high school. After graduation, she plans to enter St. Paul College’s “Power of You” program, where she can earn more credits for free. Eventually she wants to earn her nursing degree from the University of Minnesota.

Michaela desire to be a nurse goes back to her Native values of respecting the elders, and to her experiences volunteering with Indian elders in nursing homes. As a nurse, she says she will be able to keep giving back, honoring the elders, and doing what her grandpa told her – owning her American Indian identity.

The Center for School Change website has a state map with PSEO opportunities near where you live. See the website at: