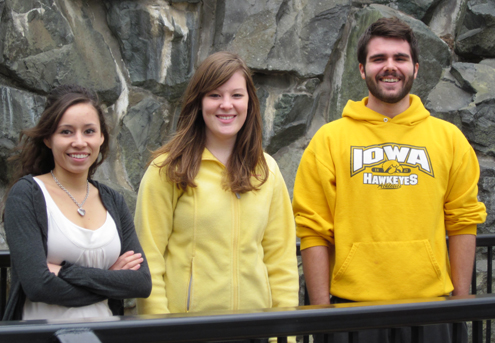 Three of the six high schools in St. Paul have a Native student in the top 10 percentile.

The American Indian Education Program for the Saint Paul Public Schools (SPPS) has three Native students that are in the top 10% of academic achievement at their high schools.
The students who made the honor roll are: Virginia Godfrey, from Como Senior High School (ranked number 15 out of 373 students); Brook LaFloe, a Johnson High Senior (ranked 13 out of 359 students); and Kyle Reiter, a senior at Harding High School (ranked 3 out of 541 students). The students will all be graduating this year and have plans for post-secondary education. LaFloe (Turtle Mountain Ojibwe) has just been awarded a Gates Scholarship, and Reiter (Michigan Ojibwe) has recieved the Horatio Alger scholarship.

When asked what the secret is to their academic success, all three responded that it takes hard work, and long hours studying for exams.
"I spend more than two hours a day doing homework, studying for tests, etc. It starts out where you're taking easy classes in your freshman and sophomore years, but now I'm taking classes like physics and calculus. I like to challenge myself and develop time-management. You've got to have a schedule to have success! " Godfrey (Potawatomi) said.
Cindy Johnson (Red Lake Ojibwe), an Academic Monitor for the Indian Education Program, is proud that students in the Indian Education program are achieving academically. Johnson grew up in St. Paul. A self-described "first-generation urban Indian", both her parents were fluent Ojibwe speakers.
And Johnson knows the students personally; she's friends with the mother of Godfrey and has known LaFloe since she was four years old.
When LaFloe was asked why she worked so hard on academics, she said, "Academics are extremely important. Academic achievement is something you have to work towards; it takes a lot of time and a lot of effort, but it also pays off in the end. Going to college helps you meet people who will help you throughout your life, so it's definitely something to work towards."
"The American Indian Education Programs are everywhere in districts that have over ten American Indian students. Indian Education programs are nationwide; since 1973 we have been helping students achieve academically. Sometimes there are Indian Education programs in schools and Native students are simply not aware of their existence. Sometimes its teachers don't know the students are Native, sometimes its school administrations don't know what we do for students," Johnson said.
Johnson knows the hardships Native American youth may experience trying to graduate from high school. One story in particular comes from Reiter, who in 2006 was involved in a car crash that took the life of his father and mentor Patrick Reiter. Now, in 2011, he is in the top 99th percentile for academic performance in the SPPS system. Johnson says his example can help to inspire other Native students.
"I think academic success is really important. It's not just putting another notch on your belt, it's about being accepted into college. When I would do homework or extra hour studying, I would always be thinking about higher education. My family may not be able to provide help financially when it comes to going to college, so I think it is my responsibility to do what I can to ensure I can go to college," Reiter said.
The American Indian Education Program's mission is to assist Native American students in graduating from high school with a quality education and a positive cultural/personal identity. The program is supervised via the Office of Professional Development in St. Paul Public Schools.
On June 23, 1972 the Indian Education Act was adopted by Congress in response to a growing need for educational reform for Native American students. Among other measures, the law affords funding to support programs designed specifically to help Native students excel in their schools.
"Our main grant is a Title 7 grant issued by the federal government. There is an obligation to educate Native Youth, and during the 60s and 70s, with the problems in boarding schools, it became apparent that the federal government wasn't doing its job well," Johnson said.
The main source of funding is the Title 7 grant, which is federally funded. There is also the Johnson-O'Malley grant, which are supplemental funds. State grants play a role as well, though these grants are aimed specifically at getting Native students into post-secondary education.
Academic tutoring is also available for Native students in the Twin Cities. The program hires college students to tutor Native youth. Christina Fairbanks, a Gates recipient, is an academic tutor for the American Indian Education Program.
"She's been there. She's been in the Advance Placement/International Baccalaureate programs, she knows the teachers [in the school district]. She works with the students as well as the faculty of the schools they attend," Johnson said.
The American Indian Education Program currently has three tutors, and will be hiring another for next year. Johnson rigorously sets standards of success in her tutors, so that their students will excel in school.
"Our tutors use laptops. They can't be going around schools, looking for workstations. Our tutoring program is all online," Johnson said.
In addition to tutoring, there are other programs designed to educate parents on how they can help their children achieve academic success.
"We're a well-rounded program," Johnson said. "We try to involve the families of students from an early age. Our Early Childhood Family Education program will get together with the families, greet each other, have dinner, sing songs, then split the parents and the children into age-appropriate groups to do activities such as finger painting, pictures, etc. There are just so many programs that we do, we're really trying to build these values of academic success into the community."

For more information about the SPPS American Indian Education Program, see their website at: www.indianeducation.spps.org.