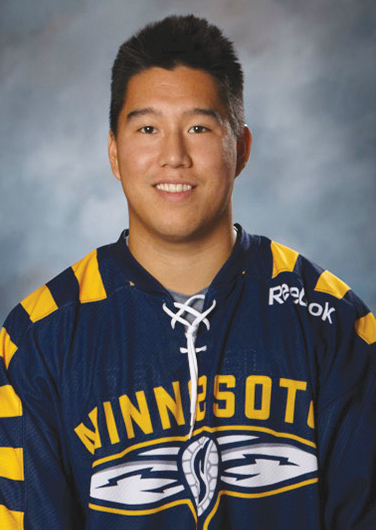 From an early age, Minnesota Swarm rookie forward Corbyn Tao felt a strong connection to the sport of lacrosse. Tao, who is a member of the Nishga Tribe (located on the Nass River in northwestern British Colombia), played several sports growing up, but none could compare to the rush he felt playing lacrosse.

"I started playing when I was around four years old after my dad introduced me to the sport," Tao said. "… It’s definitely a passionate sport that makes me feel culturally in tune with my background."

Tao’s journey to the pros is a tale of both risk and reward. Before he entered his sophomore year of high school, Tao moved away from his family and friends in the Lower Mainland to attend a boarding school in Hudson, Ohio in hopes of being able to obtain a college degree and advance his lacrosse career.

"It was a pretty big decision, but I was excited about it at the same time," he said. "I was a little nervous, and I didn’t know what to expect, but I was open for a new experience and I learned to become independent. The chance to pursue a secondary education was a big factor."

His decision to move east paid dividends. After high school, Tao attended Robert Morris University, where he graduated with a degree in Business Management and was a star attackman for the school’s Division I lacrosse team from 2008-11. In 2010, Tao led the NCAA in shooting percentage (53.2%) and recorded 41 goals, which at the time was a school record.

Tao also spent three summers playing box lacrosse in Six Nations and won a Minto Cup with the Arrows in 2007. That year, he was teammates with future National Lacrosse League (NLL) stars and fellow Natives Sid Smith, Cody Jamieson and Craig Point. "It was a great experience," Tao said. "I really had a blast, and it was definitely a learning curve at the same time playing with those talented players."

Spending time in Six Nations was just as rewarding, Tao added. "It made me realize how much passion the community can have for lacrosse and how much it means to the community."

During his first taste of NLL action with the Swarm in December 2011, Tao faced all three of his old Arrows teammates in an exhibition contest against the Rochester Knighthawks. The 23-year-old right-handed forward made an impact from the get-go, and finished with a hat trick (three goals) on the road. He also left his coaches impressed in the process.

"He’s excited about being here (in Minnesota) and wants to contribute immediately," said Joe Sullivan, Associate General Manager and Assistant Coach of the Swarm. "That’s the kind of player we were looking for."

Sullivan said the team was thrilled to find Tao still available with the 12th overall pick (second round) in the NLL Entry Draft this past September. "We needed to find a gritty, offensive guy that wasn’t afraid to play the inside game and had a good outside game as well. We tried to find the best available player and Corbyn dropped in our lap.

"He’s dedicated to getting better and is committed to living in Minnesota and toning all his skills each and every day to get this team better and make himself better," Sullivan said.

The Swarm features a young, athletic roster in 2012, and Tao is one of 12 new faces on the team. Minnesota plays its first home contest this season on Saturday, Jan. 28 against the Buffalo Bandits. That evening, the Swarm will celebrate its annual Native American Heritage Night, which is sponsored by Treasure Island Resort & Casino. The night recognizes local tribal leaders and features a traditional lacrosse match at halftime.

Tao will have his family and friends in attendance that night and is eager to play on Treasure Island Field at Xcel Energy Center for the first time in his career. "It’s an accomplishment and I’m proud to reach that point and represent Nishga by playing professional lacrosse," he said. "… I’m nervous and excited. I can’t wait to get out there."

Tao will live in the Twin Cities this winter and will be active in the Swarm’s Native outreach programs. The team currently supports a year-round lacrosse program on the Prairie Island Indian Community and helps host Lax-4-Life, a summer lacrosse camp for Native youth that is held on the Fond du Lac Reservation.

"I’m definitely looking forward to it," Tao said. "I’ve always enjoyed working with kids. To be able to give back to the sport and teach kids what you were taught is rewarding."

The Swarm take on the Buffalo Bandits in the 2012 Home Opener on Saturday, January 28 at 7 p.m. The night will feature a variety of traditional Native American music, dance and an exhibition at halftime of the traditional game of lacrosse.