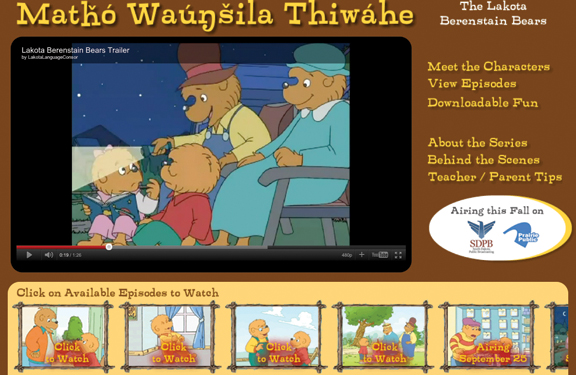 The Dakotas and Minnesota are at the front of a new wave in children’s education, as beloved furry faces begin to speak in an ancient tribal language.

For 50 years, the adventures of the Berenstain Bears have been translated into Spanish, French, and other European languages. This year, for the first time they are speaking a Native American language – Lakota – in the hopes that the language will take hold again with Lakota children and families.

The premiere coincided with the United Tribes International Powwow in Bismarck, an annual event that draw thousands of Natives and non-Natives from all over the North American continent.  During the Powwow’s events September 7-10, the Bears seemed to be everywhere: live costumed characters were honored as "dignitaries" in the Powwow’s spectacular Grand Entry and met a mob of children at Youth Day.

The voice actors, all fluent Lakota speakers from several reservations, joined the costumed characters on a float during the powwow’s parade through downtown Bismarck, and met the children on Youth Day.  A special screening was presented at the Tribal Leaders’ Summit meeting, and a big display booth kept the premiere episodes running on a continuous loop.

The Lakota Language Consortium, along with the Standing Rock Sioux Tribe and public broadcasting, produced the Lakota series and recorded it in Bismarck, N.D. And Berenstain Enterprises Inc. waived licensing fees for the project.

Jan Berenstain, who introduced the first Berenstain Bear books with her late husband, Stan, in 1962, said the Lakota project is important to help children learn the endangered language.

"I think it’s terrific," said Berenstain, who at 88 continues to write and illustrate Berenstain Bears books from her studio in Pennsylvania. "We’re very happy about it."

More than 260 million copies of Berenstain Bear books have been released in more than 20 languages, including Arabic and Chinese, said Mike Berenstain, who writes and illustrates books with his mother. And they were excited to add an American Indian language.

"We were delighted to cooperate in getting this done," he said.

In the special Lakota series, the Bears still live in Bear Country and wrestle with ordinary family problems like homework, sports team tryouts, peer pressure, and fear of going to the dentist. But every word out of their animated mouths is in Lakota.

After nearly a century of being marginalized along with traditional arts and religious practices, the Lakota language is on the cusp of a renaissance in the 21st century.  The large (and growing) numbers of self-identified Lakota, and the relatively large (but fast-dwindling) numbers of fluent speaking Elders means the Lakota still have a chance to make their heritage language one that is spoken in the home again, as a first language for upcoming generations.

Lakota is already taught in many tribal schools, but getting it back into popular, everyday use is a challenge. The Berenstain Bears may help that happen.

Besides the iconic status of the Bears for several generations of children and adults, just seeing a dentist speak comfortably with his patients in Lakota sends the message to children that they can have a professional career while speaking Lakota.

Getting the Mat ? Wa? ila Thiw?he series seen beyond the Plains states should be no problem. Both SDPB and Prairie Public will direct their online communities to www.lakotabears.com for episode downloads.

A DVD set will become available for sale in November, with a guide to each episode included.

Standing Rock Tribal Chairman Charles W. Murphy said in the project’s press release, "These characters treat each other with respect and kindness, which are traditional Lakota values, and to have them speaking Lakota to each other at home sets a good example."

Powerful yet gentle, the compassionate bear family delivers a message that both Native Americans and non-Indians are apparently more than ready to hear: that the Lakota language is alive and kicking.

Voices of the characters are all from the Lakota-speaking Standing Rock, Cheyenne River, Pine Ridge, and Rosebud communities of North and South Dakota, and reflect all local dialects of the language.

To learn more and watch episodes as they become available online see: www.lakotabears.com.

10b. The Green Eyed Monster: W?nawizi