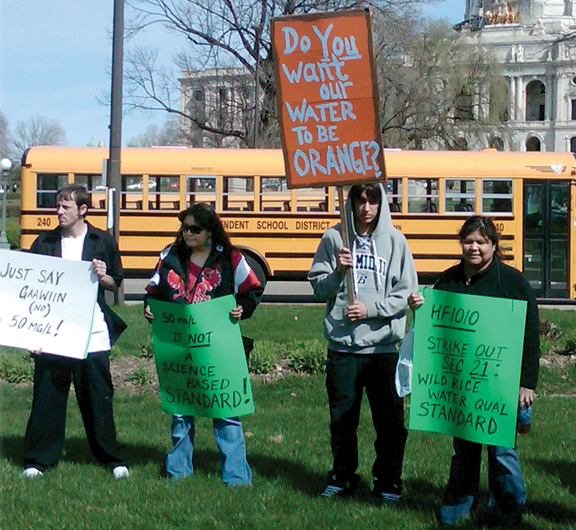 in Minnesota’s lakes would

At the State Capitol, Governor Mark Dayton vetoed legislation that, among other measures, would have threatened the growth of wild rice on Minnesota’s lakes and rivers. For weeks, debate on the budget had been stalling an omnibus environmental, energy, and natural resource financing bill named HF 1010. The legislation proposed budget cuts across the board, which would have affected the Minnesota Department of Natural Resources (MDNR) in such areas as staff levels, salaries of state employees, and reduction of water quality tests for Minnesota’s lakes.

One particular amendment to the bill concerned the treatment of wild rice that grows naturally in Minnesota. The bill called for increasing the sulfide limit in Minnesota’s bodies of water, endangering natural wild rice growth and threatening the way of life for many in Northern Minnesota.

Opposition to the bill begun at the grass-roots level. An open member group, Protect our Manoomin, speaks against the dangers of tampering with the delicate balance of wild rice stands, the beds harvested on the lakes of Northern Minnesota. The group has organized protests and rallies to bring attention to the issue, and has allied itself with other organizations concerned about the well-being of Minnesota’s lakes and their ecosystems.

Minnesota’s official state grain is wild rice. The indigenous plant is a food staple, known to Ojibwe as Manoomin, or "good berry". Wild rice is central to Anishinaabeg culture, livelihood, and traditions, as well as providing an economic boost to the region. In North America, wild rice has become a popular food choice in recent decades for its health benefits, as well as its flavor. Minnesota’s wild rice in particular has created a niche market for hand-harvested cultivations of the grain on its lakes and rivers, a practice that has thrived for hundreds of years.

The current wild rice sulfate standard is 10 milligrams per liter (10 mg/l), or ten parts per million. The proposed legislation under HF 1010 would have increased that level to 50 mg/l, with the Senate version asking to temporarily suspend the sulfide limit.

To understand how that would affect wild rice, a study was conducted in the seventies to estimate the effects of sulfates on wild rice beds. The MDNR encouraged the growth of wild rice beds in lakes where it did not grow naturally in order to promote waterfowl on the lakes. Though the wild rice flourished on lakes with 10 mg/l of sulfide or less, higher sulfate environments (40 mg/l and more) would see the thinning of wild rice the second season and a complete absence of wild rice in the third.

During the debate over the legislation, the Commissioner of the Minnesota Pollution Control Agency (MPCA), Paul Aasen, described the situation as dire. "This is the greatest problem [The MPCA] has right now. I mean that both in terms of difficulty and intellectual challenge. Usually when dealing with a water quality standard issue, you’re trying to balance safety, treatment and technology… in addition, the issue of wild rice has social, cultural, political, and economic factors that all play a role. It is a tremendous challenge."

Aasen said it’s not easy to find the right balance between preserving natural resources and accommodating the needs of commercial development. This is compounded in Minnesota by the fact that some of the most flourishing, naturally occurring wild rice stands share space with large sulfide deposits that are either being mined or might be mined in the future.

Mining projects like PolyMet Mining Company’s NorthMet Project near Hoyt Lakes, Minnesota, would be able to discharge levels of sulfate pollution that are currently not allowed if the legislation were passed. In addition, there are several other sulfide mining companies who are expected to apply for mining permits in the near future.

"We go out and find whether increased sulfide, or chlorine, or any other substance added to a water’s composition, allows wild rice to grow, to flourish, and have a healthy life cycle," Aasen said. "We arguably haven’t done that with the current sulfide standards. Studies range from ten parts per million to three hundred. That creates enough questions in the public view that there is an obligation to figure out, based on our knowledge, and information from everybody on what the sulfide standard should be."

In 1973, the MPCA concluded that sulfate concentrations above ten 10 mg/l would be a serious detriment to the growth of wild rice. This conclusion was drawn from the research of the Minnesota Department of Natural Resources (MDNR) and the work of Dr. John Moyle, one of the nation’s foremost experts on wild rice.

"This is a bigger issue at the federal level. The MPCA is a delegated authority of the Environmental Protection Agency (EPA), so we propose water standards and they approve it. For our region, ten parts per million is the standard. If we want to change that, we have to provide information and documentation proving that number needs to be changed. Currently, we do not have that documentation," Aasen said. "Whether the legislature changes that number to one or one thousand parts per million, we have to back up that change with evidence. The EPA must be convinced first that the sulfate standard should change."

When asked whether there was evidence to warrant an increase in sulfate levels, Aasen reported, "We don’t believe we have enough information where that standard should change."

However, this has not stopped legislators from pushing forward a bill that would affect Minnesota’s wild rice. Though Governor Dayton vetoed the bill, it remains to be seen if the Senate and House have noticed what exactly is in the bill they are trying to enact.

"This is an omnibus bill that has a line item concerning sulfate standards in our lakes and rivers," said Montana Picard, one of the organizers behind a rally that took place on May 4th. The rally brought together various groups who are opposed to the increasing of the sulfate standard. Friends of The Cloquet Valley State Forest, Waterlegacy, USUncut, and the No Sulfide Mining Group were among the groups that joined Protect our Manoomin on the state capitol.

"What our group is doing is trying to increase awareness of the threat to wild rice. Manoomin is an indicator species, which means if it can’t survive in a lake or river, eventually nothing else will be able to survive there either. We’ve seen depletion and thinning out of Manoomin beds in waters that have increased sulfate levels. Raising [the sulfate standard] will deplete our wild rice," Montana said.

Robert DesJarlait (Red Lake Ojibwe), a speaker for the rally, as well as an organizer for the group Protect our Manoomin, talked about the importance of voicing concerns. "The way I see it, you first educate people about what is going on, and then at some point mobilize and get your voices out there."

The group continues to be active in opposing the legislation, greeting Governor Mark Dayton on the May 14th fishing opener with signs that read, ‘Protect our Manoomin!’ and ‘Just say Gaawiin (no) to 50 mg/l!"

Unchecked sulfide mining can affect wild rice in many different ways. Industrial mining uses large amounts of fresh water, and this activity causes fluctuations in the water level of rivers, streams, and lakes. Water fluctuations of just six inches can be enough to kill off wild rice beds.

Sulfate pollution does not affect just wild rice. Increased levels of methyl-mercury in fish is a result of increased sulfide in the waters where they live, making the fish unsafe to eat and affecting surrounding wildlife as well.

Minnesota holds more wild rice stands, in both diversity and quantity, than any other state. It rests on the MDNR to protect these valuable resources, and the legislation in question would have jeopardized the water quality standards Minnesota has enjoyed for decades.

For more information about Protect our Manoomin, visit thier facebook page at: protectourmanoomin@groups.facebook.com.