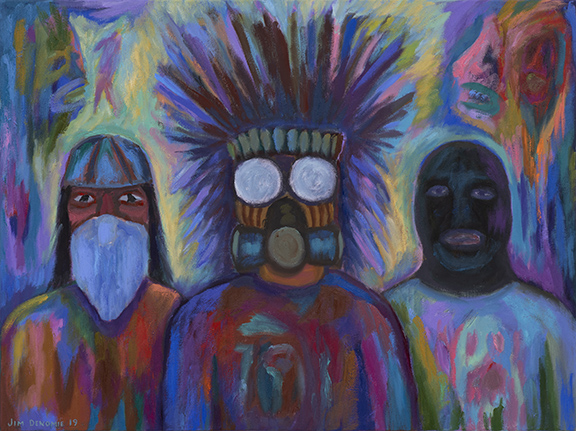 When you think of American Indian art, what comes to mind? Feathers, buffaloes, eagles, red and green peppers, a powwow dancer, a cradle board baby, a woman in a shawl with a shy smile? They are nice perhaps, but do they make you think?

Jim Denomie, an Ojibwe enrolled at the Lac Courte Oreilles Band in Wisconsin, expects you to think hard when you stand in front of his art that blends humor, current events and history.

“My art is very honest,” he said in a phone interview. “I don’t make it just to sell, I don’t make safe or pretty images. I paint reality. Someone asked me ‘how do you expect to sell these’, but what I care about is that someone remembers them. What you see is a personal perspective from a contemporary American Indian male.”

Nine works of art with that perspective are on exhibit now through April 6, at the Bockley Gallery in Minneapolis. The “Jim Denomie: Standing Rock Paintings” exhibit contains three large-scale oil canvas paintings and smaller, related portraits. 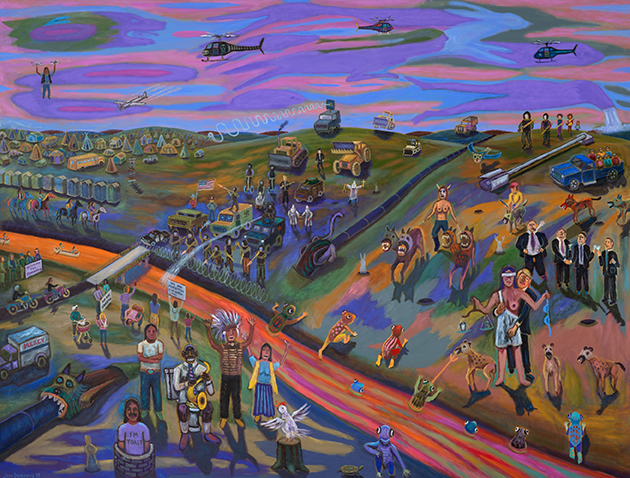 The inspiration for several of the oil paintings started with the Standing Rock Sioux Reservation resistance to the Dakota Access Pipeline in North Dakota. Beginning in 2014, Sioux community members opposed the pipeline route across sacred land and feared the impact of a pipeline oil leak on water supplies. By August 2016, the hundreds, if not thousands of protestors, were met at times with violence from security company employees using water cannons, attack dogs, pepper spray and rubber bullets.

Denomie saw FaceBook videos of the violence, which sparked anger and ultimately, his art. “I’m angry at lot of the historical ways Native people have been treated,” he said.

Examples include the U.S.-Dakota War of 1862, Wounded Knee, and more. He said there is a fine line between pain and anger, and the two sometimes cross each other.
“But I don’t generalize and point at all white people as bad,” he said. “I’m specific with who the bad people are and identify them, like Andrew Jackson and Donald Trump. My paintings don’t come across as just anger: I tone them down with humor and color.”

Trump’s role in the Standing Rock protest earned Trump anger from both Indians and non-Indians. The U.S. Army Corps of Engineers halted the pipeline project following the international protest against it. Then Trump took office and shortly into his term, signed an executive order that reopened the project that stretches across North Dakota to an Illinois refinery. The pipeline is now fully operational.

FaceBook brought images that enraged Denomie and countless viewers. But Denomie also had firsthand accounts from the protest encampment when his wife, Diane Wilson, and son, Cody Cyson, traveled to North Dakota a few times to see more than what FaceBook conveyed.

“All paintings come from my imagination, even of attack dogs,” he said. When preparing to do a work of art, he draws a series of sketches from memory or his imagination. Everything is imagined, he said, or from a dream. In this new exhibit, war symbolism appears often in the form of tanks, helicopters, and ammunition.

Clever irony and humor leap from the canvas, such as an Indian encampment complete with porta potties in “Standing Rock 2016.” The eight foot by ten foot canvas shows a clear split, perhaps represented by the Missouri River, between the protestors and pro-pipeline contingency. The Indians look oddly cheerful in their corner of the portrait; across from them, we see the symbols of war, several well-dressed white men in suits, and a light-haired Donald Trump with his hand across a woman’s crotch. One of her breasts is bare, her arms are extended. 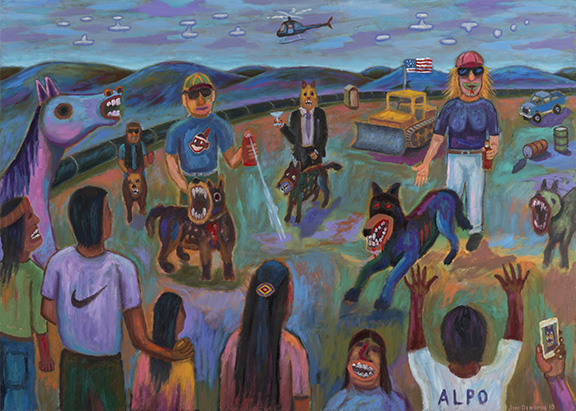 At the gallery opening on Feb. 22, hundreds of people turned out to see Denomie’s exhibit, which has been showered with praise. However, not everyone appreciates his point of view. Emails criticizing “Standing Rock 2016” were sent to the Minnesota State Arts Board complaining that state grant dollars shouldn’t be supporting Denomie’s art. Talk about a blast of irony: A squeak of protest erupts against Denomie in the shadow of the vast pipeline protest.

Whether you like what you see at the exhibit or don’t like it, this much is true: Art can and does affect the way we see the world. Denomie said that it can bring about change in the form of a small understanding of events. While art may change minds, Denomie hopes his work inspires others to find their own creative outlets, through a blog or photography or art or stories. Age doesn’t matter when it comes to self-expression, he said.

His ability was noted early. Denomie was recognized as an emerging artist at the age of six at an event at the University of Minnesota. He was raised in South Minneapolis by a single mom who brought him art supplies to use when most children are too young to use a pencil easily. He copied images from magazines and later painted from memories of his grandmother’s yard. Today his art is part of collections at the Minneapolis Institute of Art, Denver Art Museum and Walker Art Center.

For now a few oil paintings hang at the Bockley Gallery, recounting a tense period of recent history when unarmed protestors came under fire. “It reminded me of the Wounded Knee massacre of 1890 when more than 300 people were killed,” he said. “The same elements were present at Standing Rock, and I felt the danger.”