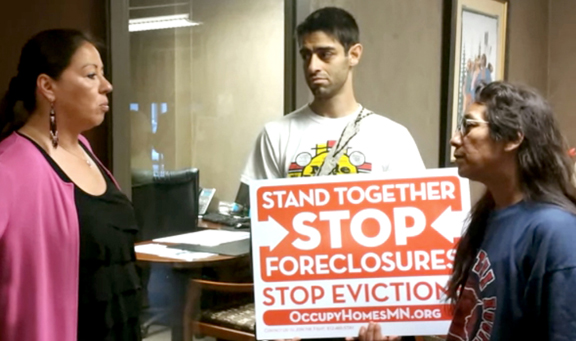 Longfellow neighborhood resident Anita Reyes (White Earth Band of Ojibwe) and Occupy Homes Minnesota (Occupy) have been protesting the foreclosure of Reyes’s house and her eviction from the premises. The property is held by Woodlands National Bank (Woodlands), one of only a few

tribally-owned financial institutions in the country and owned by the Mille Lacs Band of Ojibwe. The Minneapolis branch of the bank was opened in 2009 with programs specifically geared toward

low-income and Native American clients. The battle has caused bad feeling between people in the

Reyes and her advocates claim that the bank has been communicating erratically and untruthfully with Reyes about the status of her house and her mortgage agreement. "I figured their integrity would be flawless – they’re in a position with all this money – you would think they would have to be honest," said Reyes.

However, Woodlands representatives claim that Reyes was unresponsive to their repeated attempts to meet with her in the period leading up to her foreclosure and that she did not give them the information they needed to assist her before she defaulted on her mortgage payments.

"Woodlands Bank can’t act arbitrarily on this or any other case – we have to follow Minnesota statutes regulating foreclosures," said Joanne Whiterabbit (Ho-Chunk),  Vice President/Community Development of Woodlands. "We’ve wanted Anita to come to the table and we’ve gone above and beyond to work with her."

Reyes initially mortgaged her one-story, single family home in 1995 with Bank of America. "There were a few times when I struggled to make my mortgage payments and keep my home," said Reyes.

When her home was almost in foreclosure with Bank of America, Woodlands stepped in and saved her home. Her mortgage was officially refinanced with Woodlands in August 2010.

Reye’s says that complications with her diabetes caused her to miss work and she fell behind on her mortgage payments with Woodlands. She said she notified the bank about her health issues, but claims that they were not receptive to working with her.

Whiterabbit said that bank employees wanted to work with Reyes, but weren’t given the information to do so before her house went into foreclosure. They say the information she was served about her foreclosure were mandated by the state of Minnesota, and that they included resources and agencies Reyes could have contacted for assistance.

"There are different alternatives you can use if there’s hardship from a disability or unemployment," Whiterabbit said. "But the bank was not given the information to classify her under those programs."

According to Hennepin County public records, Reyes’s house was foreclosed upon and the house was then sold to Woodlands through a county Sheriff’s sale in October 2011. Reyes had until April 2012 to redeem her home, or work with the bank to pay what she owed. Reyes said that the bank was not willing to work with her.

As no solution occurred, possession of the property officially passed to Woodlands. On June 18, Woodlands served Reyes with an eviction notice.

"We take a really firm stance that it’s not a bunch of activists swooping in and saving a home," said Iain Wilson, an organizer with Occupy. "It’s about building a network of support that will stay there without us being there, so that we can be a toolbox for the homeowners."

After the eviction hearing, Occupy launched a public pressure campaign that is now causing division in the Indian community.

Although Occupy’s protests are nonviolent in and of themselves, Whiterabbit says the pressure campaign has resulted in bank employees and their families receiving death threats. It has also resulted in people posting disparaging remarks and personal information about Woodlands Bank and the president of the bank, Ken Villebro, on Facebook.

"I support people in having advocates, but as a public who’s receiving this information, we need to be responsible," said Whiterabbit. "It’s too easy to place misinformation on the internet."

Mike Forcia, Chairman of the American Indian Movement (AIM) chapter in Minneapolis, was asked by Reyes to support her. But when he learned that they planned to protest the bank he told them that AIM?would not support them.

"I was asked to be involved. She [Anita] came to the board meeting and laid out what was going on. I was willing to mediate between her and the bank. Then we had another meeting with Anita and Occupy where they said they were going to protest the bank. I told them that we would not protest an Indian bank."

Forcia says that any individual AIM members can support Anita but they can’t wear the AIM?shirts that those protests.

Occupy says that the bank has been unwilling to meet with Anita and Occupy.

But Forcia said he got them a meeting with the bank in one phone call, but says Occupy turned it into a rally, not a meeting.

"My issue is their [Occupy] tactics. They wanted the protests, the publicity, the pictures. There was no attempt on their part to meet with t­he bank," said Forcia.

"I think what hurts the bank is that they can’t really come forward and say what’s going on. But Occupy can say whatever they want, whether it’s true or not," said Forcia.

Woodlands halted the eviction process later in June and began negotiating with Reyes. Following a foreclosure, a former homeowner has to maintain a clean credit record for a period of 24 months before she could be eligible to take out a new mortgage on a property. Because of this stipulation, Reyes would need to rent her home from Woodlands to built back good credit.

Also as part of the rental procedure, the house needed to be inspected to ensure that it was up to city housing codes.

Hennepin County public records indicate that Reyes’s house was inspected by the City of Minneapolis on June 21. On June 26 they issued a Letter of Intent to Condemn the building "for unsanitary conditions due to excessive material." Since this time, Wilson, other Occupy volunteers, and community members have worked to help repair and clean the house.

The City planned to conduct another inspection on August 1, but Whiterabbit says the bank has yet to receive a report on the outcome of the inspection. If the house is up to code, Woodlands plans to offer Reyes a rental agreement that would allow her to stay in the home. This would give her the opportunity to demonstrate the willingness to make regular monthly payments and potentially qualify for new financing.

"I hope she can get her house back but as far as the bank being shitty to her, that’s not true. The bank, and Joanne, have bent over backwards for her," said Forcia.

Reyes and her supporters remain committed to working out an alternative that will keep Reyes from being evicted.

"This is my home, this is my life, and I’m not leaving," said Reyes.

As the negotiation process moves forward, Whiterabbit asserts that it is not in Woodlands’s best interest to foreclose properties or evict homeowners.