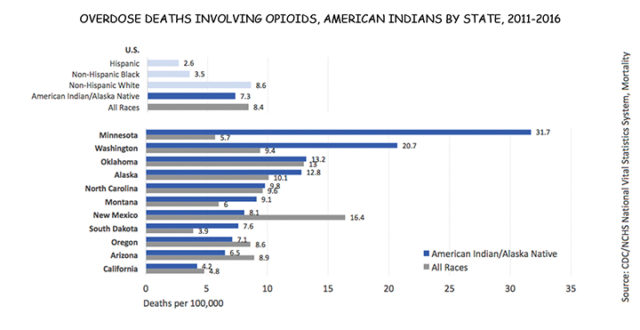 A first of a kind community based fatality review conducted at the White Earth Nation identifies risk factors that contribute to making Minnesota’s Native Americans the most likely to suffer opioid overdose deaths among all American indigenous communities.

White Earth declared an opioid overdose epidemic in 2011. This was the first such designation given by a tribal nation in North America. It led to creation of an Overdoes Response Committee and a tribal action plan was developed in 2017 to improve ways to respond to overdoses and assist recovery actions.

That, in part, led to White Earth health officials teaming with researchers at University of Minnesota Medical School’s Duluth campus, and with various national and state health organizations. Together, they explored White Earth citizens’ views on healing opioid epidemic wounds, identifying risk factors, and finding preventive actions for their community.

The researchers released their findings in December in a report entitled “Reducing opioid overdose deaths in Minnesota: Insights from one tribal nation.”

Such research should start in Minnesota given the weight of available data. In an earlier study by the Minnesota Department of Health, researchers found the overall drug overdose death rate for American Indians in Minnesota rose from 2015 to 2017 while staying constant for other groups. It increased from 47.3 per 100,000 in 2015 to 76.2 per 100,000 in 2017.

That made Minnesota the leading state with American Indian and Alaskan Native deaths from overdoses – well ahead of Washington and Oklahoma among other states struggling with opioid deaths.

The study cautions that White Earth findings may be different than what an overdose fatality review (OFR) might find at other tribal communities. But many will sound familiar to people “all over Turtle Island (North America) in all communities, especially in rural areas,” said Dr. Carson Gardner, chair of the White Earth Nation Research Review Board.

Using White Earth focus groups and interviews with family members who have lost loved ones from opioid overdoses, the researchers found the following to be risk factors for overdose deaths:

The report notes that almost every aspect of White Earth life is influenced by its historical past.

Remoteness, however, and the shame and stigma associated with even seeking help, is often a great inhibitor in rural communities everywhere, Gardner said in an interview. It is especially so in small, close knit communities “where most people all know each other,” he said.

The report said the team put cultural, historical-trauma and “spiritual input at the center of the review process.” Privacy, confidentiality and grief work for White Earth families and communities were respected, it said.

Bringing this close to home, the researchers explored with White Earth citizens their perceived risk factors for healing opioid epidemic wounds. They included:

The latter is an often recognized problem for medical officials and caregivers with Native groups and organizations. The movement from reservations to urban areas became obvious a year ago when Twin Cities-based Native and health groups worked with Native people at urban homeless encampments.

White Earth focus groups said innovative solutions are needed to prevent opioid overdose deaths. They also cited naloxone availability, or the easy-to-administer drug that helps people come out of overdose danger. And community collaborations and culture are also needed to help people and their families overcome effects of the opioid epidemic.

“One of the significant lessons is that cultural sensitive overdose fatality reviews can provide specific and culturally based strategies to save lives,” she said.

Russell is chief of Maryland’s Center for Harm Reduction Services housed at the University of Maryland at College Park. She developed a U.S. State/County HotSpot approach for a National Drug Early Warning System (NDEWS) system. She served as an independent consultant for the White Earth project.

Gardner credited Dr. Brenna Greenfield, an assistant professor and clinical psychologist at UMD, and his White Earth colleague, Clinton Alexander, with leading the White Earth study and with working through painful experiences for many White Earth citizens.

In releasing the report, Greenfield said her priority “is always to listen to what tribal communities would like to address and work on those topics from a strengths-based perspective.

“This was a unique opportunity to partner with White Earth Nation, the National Drug Early Warning System, and the Minnesota Department of Health to find ways to collaboratively address opioid overdose deaths,” she said.

UMD’s working with northern Minnesota tribes is not unusual. The University of Minnesota Medical School’s Duluth campus is second only to the University of Oklahoma in educating American Indian physicians. And the school notes that 44 percent of its alumni have medical practices in communities of less than 25,000 population.

The study better equips medical staff and communities all across the Ojibwe’s Turtle Island with clearly identified risk factors and obstacles. However, the epidemic facing Gardner, Alexander and their colleagues at home at White Earth is still a work in progress.

See the Minnesota HotSpot report at: https://ndews.umd.edu/sites/ndews.umd.edu/files/pubs/MinnesotaHotSpotReport-December-2019-FINAL.pdf
Info on the White Earth Nation is at: https://whiteearth.com/home
Find the University of MN–Duluth at: https://med.umn.edu/categories/duluth. (This site has several articles about researchers working on opioid problems and about UMD’s long history in Native American medical education. )