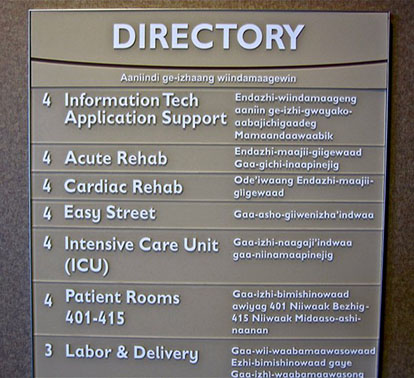 When tourists and other visitors stop by the Harmony Co-op food store in Bemidji, they find doodooshaaboo (milk) in the dairy case, bakwezhigan (bread) in the bakery department, and a variety of locally grown vegetables and fruit offerings in the editegin (produce) department.

They are likely to pick up some zhiiwaagamizigan (maple syrup) and manoomin (wild rice) on the way out of the store before heading to tourist cabins or dropping in on friends and relatives in the woods and lake country of northern Minnesota.

It’s been 10 years since a few Bemidji businesses began an effort to make their city more welcoming to surrounding indigenous communities by putting dual language signs in English and Ojibwe on public restrooms, greetings (boozhoo) on entrances, and miigwech (thank you) at cash registers and doorways. As of Sept. 15, when the Beltrami County Commissioners and Court-house joined in, there are now 180 Bemidji stores, offices, schools, medical facilities and service providers with bilingual signage.

By some estimates, more than 250 facilities throughout the Bemidji and headwaters of the Mississippi River area have posted bilingual signs. Nearby school districts have posted dual language signs in their schools, and state departments have joined in with highway signs and around Lake Itasca State Park.

What started as a “good neighbor” gesture for Bemidji people to embrace citizens of the nearby Red Lake, White Earth and Leech Lake nations is clearly having an economic impact, said Michael Meuers, a Bemidji public relations specialist who was a founder of the Bemidji Ojibwe Language Project. “People shop where they feel welcome,’ he said. “It has to be good for tourism.”

Colleen Bakken, general manager of Harmony Co-op, said the dual signage attracts tourists and appeals to customer-members of the natural foods cooperative from Bemidji as well. The store carries products from Native Harvest, a tribal foods venture that supports nonprofit projects at the White Earth Nation, and Red Lake Nation Foods as well as from area farmers. “We want people to know where their food comes from and what we’ve learned from our indigenous people,” she said.

The tourism advantage was apparent to Noemi Aylesworth when she operated the Cabin Coffee House until 2013. She was among the first Bemidji business owners to adopt bilingual signage. Tourists kept taking her menus, she said, “so I just started printing up copies and put them by the cash register. They (tourists) would take them, and they would come back. We would see them again.”

No one has yet done an economic study on what bilingual signage may be doing for the Bemidji area economy or for tourism in northern Minnesota in general. But there are complex – and pretty pricey – tools for making such measurements.

When an economic activity or even a simple event of some kind causes an expansion of the economy within a community, region, state or industry sector, economists call the greater benefit of the dollars “the multiplier effect.”

In 2012, for instance, the National Endowment for the Arts studied the multiplier effects of demand for arts and culture in the U.S. economy and found that every $1 increase in demand generated $1.69 in total output. Every job created by demand for the arts created 1.62 additional periphery jobs.

Su Ye, an economist with the Minnesota Department of Agriculture, did a similar study in 2010 for the Minnesota Legislature that found Minnesota farmers produced $16 billion in economic output in 2008, and food processors and marketers produced $26 billion from those farm products for a total direct output impact of $42 billion. But with indirect output adding $24 billion more, and another $8 billion gained from “induced” economic activity, the entire Minnesota food and agriculture sector produced $75 billion for the state’s economy in the 2008 year studied.

Those examples are cited here because Harmony Co-op, Cabin Coffee House, other Bemidji food service providers, the White Earth and Red Lake food production and processing companies, and area service and hospitality purveyors are all part of either the arts and culture and related tourism industry, or the food and ag sector.

It would be an enormous undertaking for Bemidji State University or other economists to do the research and devise input-output models necessary to measure multiplier effect gains from bilingual signs for the Bemidji area economy.

But they are real enough. Meuers, who is with the Bemidji community group Shared Vision that promotes cultural understanding among Native Americans, non-Natives and diverse area ethnic groups, said he’s received inquiries about the Ojibwe Language Project from other cities and organizations around the nation.

Bemidji State University, and especially its Ojibwe language professor Anton Treuer, have helped Shared Vision and the language project with translations. Indigenous language programs at reservation communities and at academic institutions are doing similar work in other languages. What’s going on with the Bemidji community, however, still looks unique.

There’s a word for it that is neither Dakotah nor Ojibwe, said Tammy Decoteau from the Sisseton-Wahpeton Oyate of the Lake Traverse Reservation in South Dakota. “Fabulous. It’s fabulous,” she said.

Decoteau is director of the Dakotah Language Institute, Agency Village, S.D. She said the Santee Sioux Nation does a good job with dual signage at its Ohiya Casino and Resort at Niobrara, Neb. The Ho-Chunk Nation does the same at hospitality industry sites in Wisconsin. Undoubtedly, other nations and language groups have done similar signage on their properties.

For the traveler or tourist in Indian Country, dual signage can be charming. At the same time, it encourages respect and is welcoming, said Decouteau.

A couple of years back, she recalls, a group of people from the Dakotas attended an indigenous language conference at the University of Minnesota-Duluth. Pulling into a McDonald’s restaurant in Duluth, a person at the counter greeted them with a “boozhoo.” When they paid for their food and left, they were sent on their way with a “miigwech.”

“It wasn’t our language,” Decoteau said. “But it sure made us feel welcome. We kept going back there at least once each day for the next three days.”