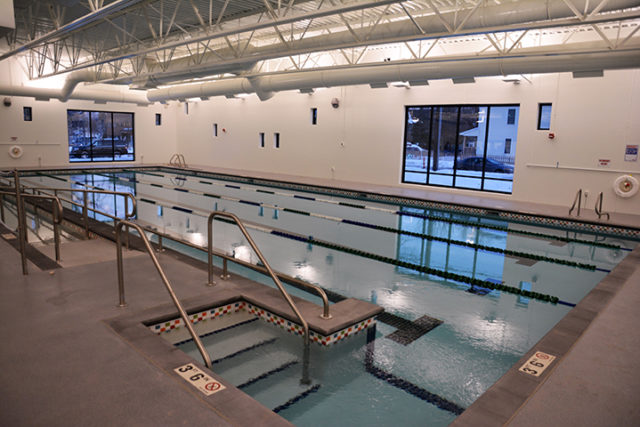 The new Phillips Aquatic Center is on track to open early this spring, becoming the first indoor, year-round swimming facility in the Minneapolis park system.

Replete with two pools, the Aquatic Center will reach thousands of youth and families living in Phillips, Little Earth of United Tribes, and greater Minneapolis. Located in Ventura Village, the renovated facility will be a focal point between the neighborhoods of Phillips West, Midtown Phillips and East Phillips. According to data compiled by Minneapolis Swims, a nonprofit organization committed to increasing access to swimming, about 15,000 youth are within walking or easy biking distance from the pool.

Muck-Wa Roberts, the Sport Coach at Little Earth, expressed enthusiasm for the upcoming opening of the pool.

“The kids, they love swimming. They are already talking about [the pool].”

Roberts currently coaches basketball and baseball at Little Earth, and described a moment when he was dropping off one of his students in the neighborhood after practice. “We actually drove by [the Phillips Aquatic Center] yesterday,” he shared. “We had all the kids talking about [the pool]. They were saying, ‘we’re going to be there all summer.’ And I said, ‘what about baseball?’ They were like, ‘besides baseball, we’re going to be there swimming.’” Roberts, noting the significance of opening the pool in Phillips, admitted that the only pools in the area require memberships.

Located at 2323 11th Avenue South, the daily entrance into the Phillips Aquatic Center will be $5 a person, with special rates for families with multiple children. There will also be a monthly pass available for $45. The Aquatics Center will be open year-round and feature multiple pools – one with six lanes for competitive/lap swimming, and another zero-depth entry pool with four lanes and warm water for teaching swim lessons.

Tyrize Cox, the Minneapolis Park and Recreation Board (MPRB) Assistant Superintendent, is working on scheduling and programming for the facility. She shared her enthusiasm for the opening. “We have worked hard to be really thoughtful about the needs of the city and how we can create programs in spaces that make people feel comfortable and welcome,” she remarked. “We will have something for everyone.”

A fight for equity

While the indoor pool has remained empty since 2008, community members have been busy fighting to save it. In 2009, the Park Board funneled$1.6 million into renovation of the 49,000 square foot facility, eventually reopening it as the Phillips Community Center. Due to high operating costs, the pool was closed and would have been filled with concrete had it not been for residents of Phillips who mobilized a movement to bring the public pool to a city – which has undeniable disparities in swimming access and ability.

Minneapolis is home to a staggering thirteen lakes and is situated on both banks of the Mississippi River. Despite often being lauded for its abundance of water, the city maintains minimal access to public pools for residents to learn basic water survivability skills. The negative consequences of this lack disproportionately impacts people of color and Indigenous people of Minneapolis.

According to a study by the Center for Disease Control and Prevention, the drowning rate for American Indians and Alaska Natives is the highest in the country and twice the rate of whites. The USA Swimming Foundation cites that the youth drowning rate is 2 to 3 times higher than the national average in ethnically-diverse communities. This disparity has deep roots in systemic racial discrimination leading to unjust swimming access and opportunity.

The risk of drowning is drastically reduced after learning how to swim. Drowning continues to be the second leading cause of death in the country for children ages 1 to 14 years old. Rebecca Gagnon, the Chair of the Minneapolis Board of Education who championed the pool, believes opening the pool is a step toward addressing the inequities when it comes to aquatics access in the city.

“[Minnesota] has one of the highest drowning rates if you look at children of color in the country,” Gagnon said. “In my opinion, like so many things in Minnesota, access is a privilege – access to a pool to learn how to swim, access to swim lessons, access to culturally relevant facilities.”

Tyrize Cox described one of the primary goals of the facility when stating, “We are developing the skills of residents and increasing their ability to swim to survive.” This commitment means providing accessible and affordable swimming facilities and lessons.

“We recognize that by being in a city with so much water, it is in the best interest of all of us to make sure our citizens can swim,” Cox added. For that reason, the pool was not made with Olympic swimmers in mind. Rather, it was built to provide residents of all ages and abilities with the opportunity to build our knowledge of water.

Gagnon, who is currently campaigning for the District 62B House seat, remains committed to expanding access to recreational services for students of color and saw the pool in Phillips as a resource for the public schools in the area. Over 50 K-12 schools are within a 2 mile radius of the pool making it a vital addition in the face of many public school pool closures, especially in low-income neighborhoods. Only 3 public school pools in Minneapolis remain; including lap pools at Northeast Middle School and Southwest High School, and the therapy pool at Dowling Elementary School. Students seeking competitive swim opportunities face long commutes and crowded lanes.

In 2015, the Minneapolis Board of Education entered into a memorandum of understanding with the Park Board, agreeing to contribute $1.75 million in capital funds toward the renovation of the pool and $150,000 a year in operating support for 5 years.

Gagnon said, “[The Phillips Aquatic Center] was built to be accessible, culturally relevant and welcoming. We aren’t just saying that we’re doing it; we’ve actually created a structure that fulfills that promise.”

Despite what appeared to be insurmountable costs to reopen and maintain the pool, advocates believed that this public pool would play a vital role in increasing water survivability of Minneapolis youth and adults.

Community members collected data and lobbied their case to the Park Board, Minneapolis Public Schools, funders, and even legislators of Minnesota. Seeing the pool as an essential asset to the neighborhood, Native residents of Phillips including Carlyle Bowker, Vania Whitefeather, Wade Keezer, and more, played active roles in advocating for the indoor public pool to prevent it from being closed indefinitely.

The project budget for the Phillips Community Center Aquatics Facility totals $5,466,000. The State of Minnesota committed to $1.75 million in bonds with Hennepin County pitching in an additional $350,000 to pay for the facility overhaul.

In March 2017 at a community event about the pool, Representative Karen Clark of District 62A said, “We wouldn’t have won this state funding without talking about racism,” she stated. “It’s really hard, but we did it and the state was happy to put in funding for this project.”

According to SMSC Vice Chairman Keith Anderson, “The Shakopee Mdewakanton Sioux Community provided the matching grant because we wanted to be involved in a project that benefits local children and families. As a neighbor, we have partnered with the City of Minneapolis and many Minneapolis organizations on important causes. Minneapolis Swims is one of them. We know that the renovated aquatic center will provide healthy and positive recreational opportunities in this diverse community, and we’re proud to be part of that.”

Bennett says his hope is “to get to the point where we are teaching every kid how to swim before they get out of third grade in Minneapolis. Starting in Phillips.”

The Minneapolis Park and Recreation Board continues to search for lifeguards, customer service attendants, and aquatics specialists to hire and train. Cox continues to be intentional about hiring staff. “It has been a real priority for us to seek out people who reflect the languages and the cultures of the community,” she said.

Programming will also be inclusive of interests in both recreational and fitness swimming. The facility will include swim lessons, water aerobics, and open swim for families and seniors. There will be family/all-gender locker rooms as well as separate locker rooms for men and women. In addition to water programs and swim lessons, the facility will offer gender-specific classes and swim times.

More information can be found online at: minneapolisparks.org.