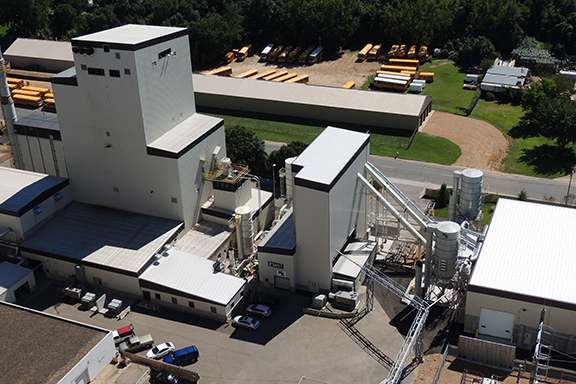 Shakopee Mdewakatanton Sioux Community (SMSC) citizens and the Rahr family were logical future business partners. They’ve been living as neighbors for most of the past 168 years in the Prior Lake and Shakopee communities southwest of the Twin Cities in Minnesota.

Inevitable or not, the day for merging a community of interests into a business venture came in 2009 when the SMSC and Rahr Malting opened Koda Energy Partnership in the city of Shakopee. It is a biomass energy generation project using agricultural byproducts and agricultural crops to produce heat and electricity for the partners’ use. Surplus production is sold to the regional Xcel Energy utility.

This business venture illustrates both the theory behind tribal enterprise development and theory used by community economic developers and planners to rationalize community business investments in the United States and Canada. In both cases, local developments result from ground up decision-making.

“Koda Energy was an opportunity to partner with our long-standing neighbor Rahr Malting in Shakopee, produce green energy, and be a good steward of the earth,” said Keith Anderson, vice-chairman of the Shakopee Mdewakanton Sioux Community and board chairman of the energy partnership.

“I do not generally believe in ‘boilerplate recommendations’ for economic development,” said Frank Pommersheim, a law professor at the University of South Dakota and tribal courts jurist in South Dakota. “It’s got to be bottom up with a focus on law, infrastructure and culture.”

Pommersheim’s 1995 book Braid of Feathers (University of California Press), in which he stresses the importance of Indians and non-Indians forging alliances based on respect at the local level, is especially helpful for Indian communities, said Patrice Kunesch and Susan Woodrow, co-directors of the newly formed Center for Indian Country Development (CICD) at the Federal Reserve Bank of Minneapolis.

“Every single tribe has a vision for its own community development … and its own challenges,” said Woodrow, the executive officer of the Minneapolis Fed’s branch office in Helena, Mont. “There is not a one-size-fits-all (formula).”

Kunesch, of Standing Rock Lakota descent and a former official at both the U.S. Department of Agriculture and Department of Interior, added that economic and community development starts with recognizing “opportunity, solutions and best practices.” This includes assessing community needs, costs of fuel, costs of food, costs of essential services, resources available, and the environment and being good stewards over resources.

This also means there are two layers for development, said Woodrow. The tribal enterprise response, or the subject of this article, is the first layer and is triggered by recognized needs. The second layer involves ways in which Indian communities assist and encourage individual entrepreneurship – the subject of future articles in The Circle.

This makes defining the term development even more complex than defining what constitutes a community, Wise noted.

In that regard, the indigenous people of North America have an advantage over other community builders, said Michael Toye, executive director of the Canadian CED (Community Economic Development) Network based at Victoriaville, Quebec.

“The indigenous communities are probably among the best examples of distinct, defined communities that we have in North America,” he said, citing sovereign treaties, geography, language, culture and traditions, and political autonomy.

Given such clear definitions in Indian Country, it is interesting to note that people worldwide are seeking a tribal approach in forming communities of interest to meet local needs and cope with the impacts of globalization.

Gert van Dijk, a Dutch economist and former president of COGECA, the Brussels umbrella arm of agricultural cooperatives in the European Union, made that point in a recent Dutch textbook that translates to “When the markets fail.” In it, he said, people “draw a circle” around their common interests and then form cooperatives (or other community-based enterprises) to meet those common needs or pursue common opportunities. This they do even when the members of these “new” communities may be diverse and share little else in common.

Observing tribal development here at home with broader community economic development theory, it appears four categories of tribal development and investment have emerged. The first and most obvious is in meeting community needs – grocery stores, services, gas stations – when local and regional markets have failed.

One step up would be developing tribal businesses that serve a broader community surrounding the Indian Nation. Often the objective would be achieving economies of scale and scope. But in cases where a service is provided for a country or region, or an enterprise serves as a broader community bank, retailer or recreation area, an element of being good neighbors plays a role along with realizing returns on investment.

A third category would be tribal enterprises that add value to local activity. This would make tribal businesses and members more entrepreneurial in their activities and in their households. Van Dijk sees that as the role of most agricultural cooperatives as well, and it explains why there is a dual bottom line of both social and economic goals for community enterprises.

Finally, a fourth category is emerging in which tribal development leaders are pursuing perceived market opportunities and seek investments to diversify tribal portfolios. This is especially the goal where Indian communities are trying to lessen their dependence on gaming revenue.

“Those four categories make sense to me; I can think of examples of each of them with Tribal Councils and First Nations here in Canada,” said Canadian CED director Toye.

Going forward, the Minneapolis Fed’s Kunesch and Woodrow said they anticipate more tribal investments in agriculture, agribusiness, health and nutrition services, biomass and energy development, and anything that can be environmentally sound development of local resources. “I see biofuels as a real natural,” said Woodrow.

All these strategies and local recognition of opportunities play out with the Shakopee Mdewakanton Sioux Community.

The Koda Energy partnership, as described by Anderson, connects with several themes mentioned above. So does Dacotah Roots, an organic recycling facility in which the SMSC community began turning organic waste materials into compost in 2011.

Area schools and local governments use the facility to dispose of organic wastes. And as part of its good neighbor strategy for its broader community, the SMSC community offers free yard waste drop off services each September and October for Scott County residents.