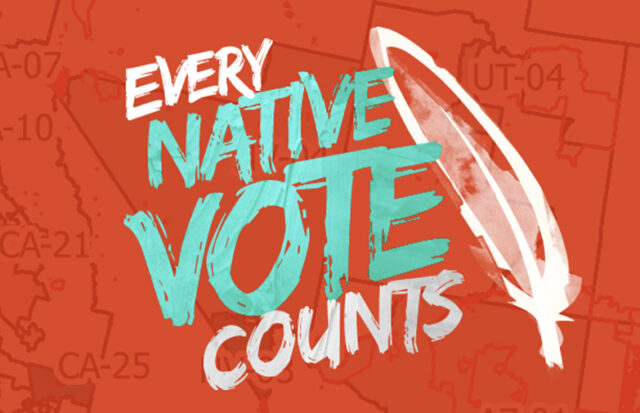 I don’t actually have a dog in this fight, I am technically a member of the Green Party, not a Democrat or a Republican. I may not be fond of the candidates running for President – Joe Biden and Donald Trump – but what I do know is that I am going to vote, and this year it really matters! And it’s not going to be easy to vote. Pandemic voting, lack of local polls in our tribal communities, and snafus with ballots mean that we will really need to be attentive and make sure that our voting rights are upheld. The best way to do that is to register early, and just do it. Vote! August 18 is the White Earth Nation Tribal Election, and August 9 is the Democratic primary.

Why Vote? Because your vote counts It’s an irony for sure. Santee philosopher John Trudell used to always point out that they did not give Native people the right to vote until we were l% of the population. You can be sure that we would not have elected Andrew Jackson or Knute Nelson if we could have voted. However, nationally and statewide, we are beginning to flex some power and it shows.

The Native American population is 6.8 million, according to U.S. Census Bureau information from 2018. While that is relatively small compared with the U.S. population, which is nearly 330 million, the Native American population has more than doubled the growth rate of the U.S. From 2000 to 2016, the U.S. population grew 14%, while the American Indian and Alaskan Native population experienced 35% growth. Those Native people are going to vote, and a lot of those people are in rural areas where Republicans have come to feel comfortable because Native people have not voted.

The election of Tim Walz and Peggy Flanagan (Ojibwe) has certainly changed Minnesota’s politics, and that’s for the best. After all, prior to the Walz/Flanagan Administration there was no strong push for cooperation between state agencies and tribal governments. Now, just attending a Minnesota Indian Affairs Council meeting, one can witness a dialogue between forces which were adversaries in former administrations.

Times are changing, and it’s time to work together – we are in a crisis and more will come.
Nationally, as progressive and younger voters come to the polls, upsets continue. Politics has been pretty much an Old Boys Club until recently. In 1981, 94% of Congress was white, compared with 80% of the U.S. population. By 2020, more than one-in-five voting members (22%) of the U.S. House of Representatives and Senate are racial or ethnic minorities, making the 116th Congress the most racially and ethnically diverse in history. 90% of the newly elected people of color are Democrats. And it makes a difference.

There’s some visionary leadership moving this country’s politics. Minnesota is one of those leaders, and Lt. Governor Flanagan has been part of that change along with many of her colleagues, of all colors. Nationally, the changes are very visible, including the most visionary leadership in decades, and it’s coming from women of color – take Alexandria Ocasio Cortez and Deb Haaland as examples. Freshman Democratic Rep. Alexandria Ocasio-Cortez handily defeated her challenger this past month. It was formerly held for years by veteran Democrat Joe Crowley, who Ocasio-Cortez defeated in a major upset in the 2018 midterm elections.

In the Minnesota state election, candidates like White Earth Secretary Treasurer Alan Roy – running against long time incumbent Senator Paul Utke – represents a potential gain for Native voters this fall. Utke was a primary sponsor of the Anti-Protest bills targeting Native and other Water Protectors, in the last legislature. With the rise of Water Protectors and now the Black Lives Movement, anti-protest bills certainly pose a danger to civil liberties, and target Native people.

Since the powerful protests at Standing Rock and the Keystone XL pipeline, over 20 states introduced legislation attempting to silence peaceful protesters – specifically targeting pipeline activists on the frontlines of the fight for climate justice. These so-called “critical infrastructure” laws increase penalties for people speaking against fossil fuel pipelines, like Enbridge’s Line 3.

The bills are designed to intimidate individuals, communities, and organizations from lawfully exercising their First Amendment and other fundamental rights. They criminalize trespassing on oil, gas, utility, railroad, and other properties – including those under construction – as a gross misdemeanor punishable by one year in jail and a $3,000 fine. Trespass “with the intent to disrupt the operation or provision of services” of the pipeline or utility would be a felony punishable by up to five years in prison and a $10,000 fine.

The bills would allow a court to order anyone convicted of such offenses to pay for “the costs and expenses resulting from the “crime”. Utke was a supporter of the work on Missing and Murdered Indigenous women, but has not been supportive of many appropriations or legislative items in favor of Native people.

In Cloquet, City Council seat in Ward 5 is up in an August 11 primary, with Lyz Jaakola (a Fond du Lac tribal member, music and culture teacher, and musician) faces former Mayor Dave Hallback and Dennis Painter. The city has faced layoffs at the Diamond Match plant, and more economic shifts are to come in the pandemic and post pandemic world, and may need some fresh eyes to solve long term challenges.

Elsewhere in Bemidji, two Native women are facing off in a City Council election, against two others, in a town where the Native community is exercising more political power. Audrey Thayer and Laura Fairbanks are facing off for a Ward 1 seat.

And at White Earth, two candidates – Cheryl Jackson and Umsy Tibbetts – are squaring off in the tribal election on August l8, on a ballot which also includes a medical marijuana referendum. At any turn our tribal communities and our cities, and the country face some major challenges ahead, as we plan for what will be a very different future. I for one think that future needs to have Native people at the table, not on the menu.

Now just because you are a Native doesn’t mean that you advocate for Native issues. Take Representative Steve Green for instance, who represents Clearwater County and Clearbrook – with well over 9000 Native voters. His voting record has been spotty at the least, and as a representative, he supports Line 3 and pipeline expansion, as well as opposing the allocation of state funds to support White Earth’s recovery of land illegally taken by the state and Clearwater County.

Representative Green, on the appropriation, “said he is a member of the White Earth Nation. He said that he did not want to take the property, now privately owned, off the tax rolls. As a tribal member, I can tell you that property taxes are killing us,” Green told local reporters.

Take some time and review the candidates, it matters. There’s a big push nationally to get out the vote. And Minnesota votes will count. We had the highest turn out of any state in the 2018 mid term election, and now we have a chance to put people in office again.

Nationally, Native people represent one of the fastest growing populations, but 34% of our eligible voters, well over a million of us, have not registered to vote.
Now would be a good year to get out there and vote!

This is a personal opinion article and does not represent Honor the Earth or voter registration initiatives.