A third protester, Carolyn Feldman, 27, was also booked into Hennepin County Jail and is being charged with obstructing the legal process, a misdemeanor.

Online records for Hennepin County Jail showed the three were released from custody on January 2nd.

Officers working off-duty at U.S. Bank stadium first responded to reports of two people climbing to the top of a support truss near the stadium’s roof during the game’s second quarter. It’s not immediately clear how the banner got into the stadium. Items including backpacks, purses, umbrellas and camera cases are all prohibited.

In a statement, SMG Worldwide Entertainment and Convention Venue Management, the stadium’s operator, said the two individuals appear to have climbed over a guard rail to access the support truss. 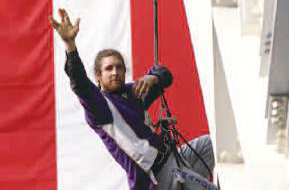 Mayo and Holiday then lowered themselves from the truss and hung by ropes over spectators in a seating section below them. That section was later evacuated by police and stadium staff.

“We had negotiators that climbed up there and spoke with these individuals and tried to get them to come down on their own and my understanding is they did eventually come down after speaking with our negotiators for a period of time.”

Mayo and Holiday climbed down on their own around 3 p.m., after the game, and were arrested by police.

Medical staff, including a physician from HCMC, evaluated the two and found no injuries. Mayo and Holiday refused any further medical treatment.

The two climbers plan to make a brief statement and answer questions outside of the downtown Minneapolis stadium later, a spokeswoman for the protest group said in a news release.

Sunday’s action is the latest from pipeline protesters like Nina Roberson, who prefer to be called “water protectors” and want companies to stop any financial support of the pipeline. Roberson called Sunday’s protest event a success.

“They should be divesting from Energy Transfer Partners and the pipeline project because it violates the Fort Laramie treaty that the Standing Rock Sioux have. So it’s being built on indigenous land without their consent. It also risks their drinking water and the health of the Missouri River and other surrounding communities.”

Minneapolis police said in a statement the department will meet with the Minnesota Sports Facilities Authority, the Minnesota Vikings, Monterrey Security and SMG as the investigation continues.

“The investigators from the Minneapolis Police Department will be reviewing all video and statements from witnesses and attempting to talk to the suspects – or the arrested persons – about the event,” said Michal.

Last month, protesters ended a sit in at Wells Fargo offices in downtown Minneapolis after saying they received assurances that bank officials would meet with tribal elders concerned with the bank’s investment in the Dakota Access pipeline.

The U.S. Army Corps of Engineers announced in early December that more analysis is needed before it will allow the Dakota Access pipeline to cross the Missouri River just north of North Dakota’s Standing Rock Indian Reservation.

The pipeline is part of a four-state, $3.8 billion project announced in 2014 to trans-port approximately 470,000 barrels per day of sweet crude oil from its production point in North Dakota to an existing pipeline in Illinois. The Corps’ announcement that it would not grant a key easement for the pipeline to cross the Missouri River at the proposed point put pipeline construction on hold.