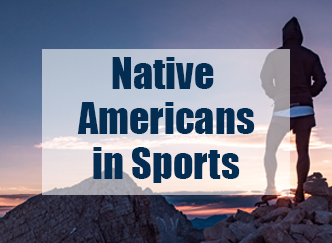 At 39, Angelo Baca (Navajo/Hopi) continues to lace up his running shoes and runs toward the east before sunrise. A three-time National Junior College Athletic Association (NJCAA) National Champion in Cross Country, Angelo’s high altitude running began at an early age near his hometown of Blanding, Utah and in the Bears Ears region.

“My greatest classroom has been the outside environment and I get to visit that every day,” Angelo said. “When we wake up in the morning and say our prayers and go for a run, we greet the morning sun and we are greeted back.”

Angelo was a youth development program clinician for the Wings of America Program in the early 2000’s after competing on Wings of America junior teams in the mid-1990s in USATF National Cross Country races. As a clinician, Angelo instructed native youth healthy lifestyles with traditional lifeways.

After high school, Angelo enrolled at Southwestern Indian Polytechnic Institute (SIPI) in Albuquerque, New Mexico. He was a three-time National Junior College Athletic Association (NJCAA) National Champion in Cross Country and on the outdoor track in the 3000 meters steeplechase and 5000 meters in 2002-03. He was also a seven-time NJCAA All American in Cross Country, Track and the Half Marathon. After SIPI, he competed at the NCAA DI level at the University of Washington.

“Working with Angelo I got to witness many qualities that you don’t normally get from someone who hasn’t turned 20 yet,” said Michael Daney, running coach at SIPI. “He had a respectful competitive drive to be a better than average athlete. In winning he showed respect to other competitors letting them know to keep training hard and you will catch me.”

In a recent school visit, Angelo encouraged the students to watch nature and see how the young animals and birds play. Their play gets them ready for their adult life. This is also true for our children as they get older.

“The animals never forget who we are because they see us every day in their world,” added Angelo. “The best way to remind ourselves who we are and where we belong is to go out into the world and have relationships with our relatives.”

“Many of the gifts I received came from spending time in the Bears Ears region running trails and logging lots of miles learning about the natural environment that my Hopi and Navajo ancestors know,” said Angelo.

“I became a steeplechase national champion by growing up in a place that had a rugged terrain which made me very efficient at negotiating technical and difficult spaces in the landscape,” said Angelo. “One day it dawned on me I was running through the same spaces that my Hopi and Navajo ancestors have gone through. I get to go into spaces that are difficult to get to unless by foot. Therefore, I get to be an observer and a protector of ancestral sites and sacred areas.”

A graduate of the Native Voices Program at the University of Washington, Angelo has done numerous documentaries and collaborative works with other filmmakers. He also was a Visiting Scholar in American Studies at Brown University.

Angelo is the Cultural Resources Coordinator for the non-profit organization Utah Dine’ Bikeyah’ [http://utahdinebikeyah.org], and directed and produced the award winning documentary “Shash Jaa: Bears Ears” in 2016. He is also in the final stages in his doctoral program in sociocultural anthropology at New York University.

“Drawing upon critical heritage discourse and indigenous media theory, Angelo’s thesis will highlight the importance of cultural heritage and storytelling through a variety of media that offer nuanced and diverse perspectives of narratives emanating from the Bears Ears region,” said Dr. Jane Anderson, Angelo’s PhD Advisor, New York University, Department of Anthropology. “We are very excited about Angelo’s thesis and are confident that it will make an important intervention with sites of sacred land protection and digital narrative production.”

“Being both Hopi and Navajo are two of my greatest strengths because I know both of my cultural backgrounds and their traditional knowledges including being on the landscape where both of these ancestors reside,” added Angelo. “There is nothing more powerful than realizing your indigenous body is connected to this land.”