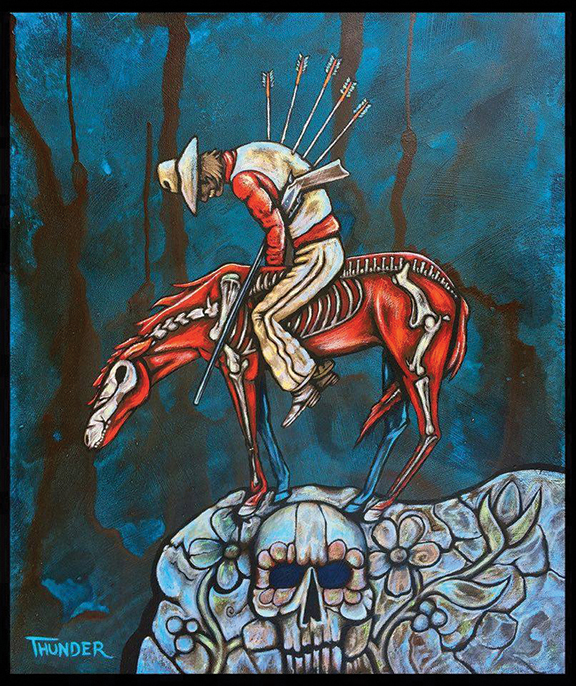 Artists Carl Gawboy, Joyce LaPorte, Wendy Savage, Karen Savage-Blue, Vern Northrup, Jonathan Thunder, Charles Nahgahnub, Robin Bellanger and Larissa Greensky are part of the exhibit called “Asemaa”. In the Ojibwe language asemaa means tobacco, and many pieces that were showcased in the exhibit had that theme.

Wendy Savage, the curator of the show, painted a sacred tobacco pouch that was dedicated to family members that had passed on due to cancer, and it also represented her own recovery from the disease. Savage’s work also showcased her classic Ojibwe indigenous plant and berry designs of acrylic on wood.

Photographer Vern Northrup’s display had pictures of red willow, bear berry, dogwood (Red Ochre) and asemaa that he said his grandfather used to mix up to smoke in his pipe. Northrup’s grandfather would have him pick the plants from the woods and would tell him that tobacco alone was too strong, and so he would add the other plants to create what we call ‘kinnickinick’.

Carl Gawboy, who is famous for his watercolor paintings of traditional Ojibwe life, did a 3-D piece of acrylic on plywood (cut by Jay Newcombe) that shows two people canoeing with the sunset behind them, which is now in the possession of an individual collector. Gawboy also painted a picture of two men in a canoe, one of whom is offering asemaa into the lake.

The Asemaa poster for the exhibit was done by Karen Savage-Blue. Savage Blue had a gorgeous piece of the “Witch Tree” on Lake Superior in Grand Portage Minnesota.

Multi-medium artist Charles Nahgahnub displayed some stunning photographs of agates he had cut open, He used the sun and light-bending technology apps on his phone to create the photographs.

An artist new to me was Robin Bellanger, who used his personal life experiences and dreams to produce art that is rich with symbolism of growth and change.

Collectively, all the art had a common theme that asemaa is the vessel that connects us and to use tobacco as it was meant to be, returning it to its sacred purpose. All attendees were gifted our own asemaa plant to grow.

The exhibit runs until December 27 at Trepanier Hall, 202 West Second Street in Duluth, MN. Visitors must ask for admission at the front desk.

Sky Hopinka’s “Disfluencies” stays in your head for days