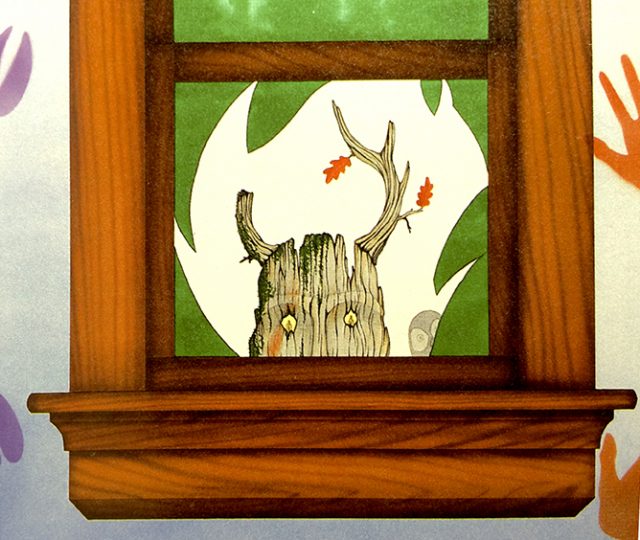 Jeffrey Chapman (Ojibwe) is a Minneapolis-based artist, flute maker, art historian and teacher. His artwork sits between two worlds: complexity and simplicity, humorous and serious, inside and outside. I sat down with Mr. Chapman to talk about his work.

AC: First off, your watercolors are surreal. Wood grain panels becomes silhouettes, animals and elders are peering around walls. I’d argue that the surreal aspects are uncanny, unsettling yet funny. I think it might be called “Dark Humor.” Would you agree?

JC: You’ve got it perfectly… can we go have lunch now?

AC: No! But would you agree? I mean, I think some of your work is scarey as hell.

JC: I’ve always been inspired by René Magritte. I love surrealism because it goes beyond the immediacy of knowing what an object is, and where it comes from and how it’s used. Realism is all great. If you can do something photographically realistic, that’s wonderful. Abstract art relies more on experiencing it, because you are in front of it and that is what it is. But with Surrealism, there’s always a narrative involved. Narrative work requires you to create a narrative in either in your own mind, or maybe you hear the original artist’s story, but it takes you somewhere else. Any time you have something that is figurative there is always another story within it. My stuff is narrative and surreal… but windows aren’t always windows and doors aren’t always doors. There are multiple meanings to all those things, like silhouettes and animals. For example, what is a window…? You can see from the inside out, the outside in.

AC: It is a border of sorts.

JC: It is! And it’s a transition point. Doors don’t only keep you out, or keep out other things, they’re symbolic of a transition between two states. Even stairways are symbolic of ascension, and a lot of Native people use that. If you look at the work of Hopi people for instance, you’ll see ladders. They are symbolic for ascending or descending into something else. So, when I use a window or a door or a highway or whatever, it’s about multiple ideas. I try not to give people too much of an idea of what these things could be, because you might ruin it for people. Because they might see what they need to see. For example, you see something scary looking in this window.

AC: Yes, well… I feel like I’m on the outside of the house and there is a broken window with reflections of trees. This mask appears to be looking out from within house at me… right?

JC: Or conversely, it can be the other way around. Based on what side of that barrier you are on.

AC: This presents a kind of denial. Your context is either a window or door, but your framework doesn’t offer a context to whether or not your viewer is inside or outside.

JC: It is ephemeral, but it’s painted like that for a reason. If I connected the window to an actual wall or siding, it would change the context. This allows you a mental mobility to go to either side, either you are inside or outside. You’re looking in on him and he is looking in on you. But, that piece is Grandma’s House. And the sad thing is my grandma never had a door that nice. When she would leave the house she would put a car tire on the door. That’s how she would lock up. That’s how you knew she wasn’t home, because there was a tire on the front of the door. And sometimes she would sneak the tire in front of the door when she was actually home so she wouldn’t be bothered. And you’d think, “Oh, the car tire is there, she must be out.”

AC: That appears to be one of your motifs, or something you’ve made symbolic: a shared experience of a stressed socio-political state and low economic standings amongst us. Economic disadvantage in your works, like “Check’s in the Mail” or “Fast Food”, appear to be commenting on a disadvantaged economic standing… but the work is also funny.

JC: You have to. That goes hand and hand with being Native. I did an interview one time after an exhibition on Indian Humor and I was asked about that show. And the interviewer asked me, “Do Indian people laugh?”

AC: With an entirely stoic face you should have said, “No… never!”

JC: Or I should have just laughed maniacally or leaped up on the chair or something. Yeah, Indian people are pretty funny. Humor is an integral part of Native sacredness. Humor is sacred, it isn’t just something you do randomly. Every culture has clowns, sacred clowns. Although, you don’t see the Ojibwe clowns so much any more.

AC: You know… I know some people who qualify.

JC: Oh, people you know. But there used to be people in the forests… the little people with the hoods. They were clowns and every people has them. Humor is sacred to Native people because it is part of human existence. If you can’t be funny, if you can’t be fun, if you can’t make fun, you die a little. And our art used to be funny, too. There were so many flutes created back-in-the-day that had these funny, little naked characters on them. The Catholic church turned up and took them away, thinking they were crude or in poor taste. I know there is a church out there somewhere that has a collection of these things that will never see the light of day.

AC: Speaking of flutes. I think your watercolor works have some similar qualities of your flutes. They translate your watercolors into a three-dimensional form.

AC: Yes. Look at how clean and tidy these lines are, and these beautiful color-blocked areas… they are perfectly rendered.

JC: The ones you’ve never seen are the ones that have ended up in the garbage because they weren’t correct. I have piles of flutes like that… That’s just my nature, but I try not to be like that.

JC: Well, it can get tedious to keep starting over.

AC: But you are using watercolor to create these portraits… Watercolor is about the most unforgiving material there is. You can’t hide or cover up your mistakes. Why would you choose that for yourself?

JC: The reason I started painting in watercolor, back when I was an MCAD [Minneapolis College of Art & Design] student, was because nobody did it. No one was painting in watercolor seriously. People who did watercolor painted boats, or lil ol’ ladies doing flowers. When I started monkeying with it, I thought, “This shit’s hard.” It’s hard, because when you screw up, that’s it. You start over again or learn to deal with it. And that was a challenge for me to try to master that.

JC: And then I started looking at the old master’s work from Europe. And they almost never did an image of a person looking straight at you… Unless it was one of Rembrandt’s dozens of look-at-me self-portraits. Portraits were always depicted looking off into the distance. And I thought, “What’s the purpose of that?” I’m creating a portrait of a human being or a pseudo-human being, they should be looking at me. They should be looking at the viewer. They should be making eye contact in some fashion. Or at least confronting the viewer in some way. If you do it any other way, they become an object and you aren’t engaging with that object. You aren’t engaging with this guy if he is looking the other way, and he becomes an object like a potted plant or chair. If you look at Jim Denomie’s [a Twin Cities Ojibwe artist] portraits they are looking straight at you and it’s confrontational. And I wanted to make characters in my work to support a narrative that creates a dialogue with the viewer, if not with the image, with themselves about the image.

AC: Well, it’s been great having a dialogue with you. Thank you for meeting with me.

Sky Hopinka’s “Disfluencies” stays in your head for days