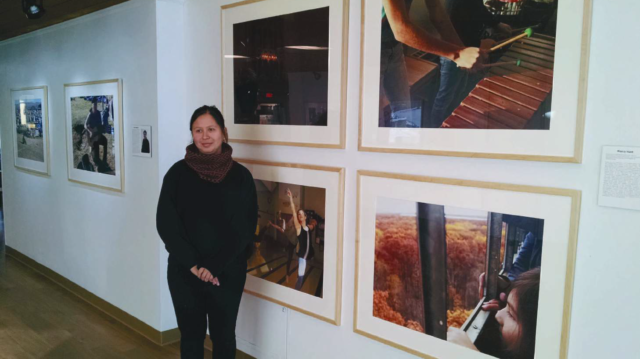 The new year is starting with a strong emphasis on helping young Native people develop and define their own identities while advancing their artistic talents through photography and story-telling. Until Jan. 27, six Twin Cities high school students have large photographs in an exhibition at the Two Rivers Gallery located in the Minneapolis American Indian Center.

Mazinaakizige: American Indian Teen Photography Project is an internship and training collaboration between the Minnesota Historical Society and PATCkids. Details were being worked out in late December for the artistic photo collection to become a traveling exhibit, said Two Rivers executive director Maggie Thompson.

Separately, young students in the Duluth area have also turned to cameras to hone artistic skills and storytelling talents for a 2017 calendar, “Through Our Eyes.” It partly serves as a fundraiser for the American Indian Community Housing Organization (AICHO) that has several housing programs for urban Native Americans in Duluth.

AICHO sells the 13-month calendars for $15 each, plus $5 for shipping and handling; and it does offer bulk rates for large orders.

Calendar sales mostly cover costs of production and printing, said Michelle LeBeau, AICHO’s development director. That, in turn, helps AICHO to work with young people from its housing programs to develop their talents and self-esteem, and realize their own strengths as well as their cultural strengths, she said.

Kristine Sorensen, an educator with the St. Paul-based In-Progress group that mentored the Duluth young people, said there are “two-fold” objectives behind the annual photography, storytelling and calendar project. It does build young peoples’ self-identify, she said, and it allows some of the young people to develop marketable skills that could lead to careers in various media and visual arts.

That is the strikingly obvious connection of present and future opportunities for the students whose works are on display at Two Rivers Gallery. The student artists participating in the exhibit include: Joe Ettawageshik, a freshman at Breck School in Golden Valley from the Little Traverse Bay Bands of Odawa (Upper Peninsula of Michigan); Amoreina Espinosa, a sophomore at Twin Cities Academy in St. Paul, who descends from the Aztec of Mexico and the Red Lake and White Earth Ojibwe cultures; Angel Swann, a senior at Armstrong High School in Robbinsdale who traces her culture to the White Earth Nation; Marco Hunt, a senior at Breck School who traces his origins to Ho-Chunk, Oglala Lakota and Buffalo Clan Ojibwe from Leech Lake; Nolan Berglund, a sophomore at Harding High School in St. Paul, a descendant of Northern Cheyenne (Lame Deer, Mont.) and Oglala Lakota (Pine Ridge, S.D.); and Shaw Handley, a student at Fair Senior High School in Minneapolis. He is originally from Rapid City, S.D., and traces his origins to the Sicangu Lakota at the Rosebud Sioux Tribe.

In biographical information accompanying their art at Two Rivers Gallery, Berglund said he thought of how the medicine wheel represents four stages of life – infancy, adolescence, adulthood and “elderhood.” “Each of my photos express the stages of life and how throughout the stages we gain knowledge that guides us down the right path…,” he wrote.

The Minnesota Historical Society said the name of the project, Mazinaakizige, can be loosely translated from Ojibwe to mean “one (or he or she) take picture.”

How encompassing this art form can be is expressed in the biographical material from Marco Hunt. He said he was inspired by the portraiture on school walls. In joining the program, he said, “I learned how to photograph subjects that move rather than still life alone, as I was doing in the past.

“I hope the audience is able to see the relationship with the photo, to understand that it is okay to lean on your friends for support, and to strengthen those connections,” he said.

For information on the American Indian Community Housing Organization, its youth photography project, and how to order 2017 calendars, check these websites: