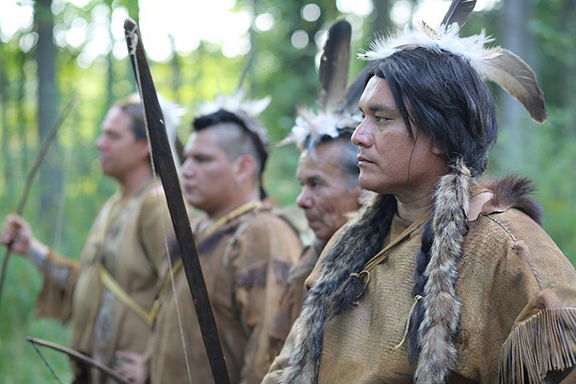 Two points stand out from the eight-episode Canadian-produced series “1491: The Untold Story of the Americas Before Columbus.” First, indigenous people from North, Central and South America are still here, and their languages and traditions survived with them.

Second, education and using it well makes an impact. Today Native scholars tackle questions on early life in the Americas as trained archaeologists, art historians, ethnographers, geneticists, anthropologists, geologists and linguists. They find, identify and classify artifacts like their non-Indian peers, but take the process further. They also seek the story that accompanies the artifact so it is understood fully in context.

Only one 44-minute episode of the series is available now online; the entire series is supposed to be available for DVD purchase in 2018. “The Untold Story” was filmed in Canada and Peru and broadcast earlier in 2017 on Canada’s Aboriginal People’s Television Network.

The series opens at the geological and geographical beginning with the Ice Age and its impact on human migration.

Today there’s evidence that people arrived in the New World more than 20,000 years ago from a variety of directions. In this segment, Native actors play Native explorers, undertaking the treacherous journey rife with “unknown peril and promise,” according to a narrator. Woven through the episode are interviews with Native scholars, who study physical evidence and language to better understand the whole of their own history and place. Says one of them, “We as a living people are products of a long journey.”

Courage is mentioned several times during the segment and the fact that today’s descendants of the explorers are the products of brave people who took journeys into the unknown. The question arises: why do humans do that, risk everything in order to start over? There’s no clear answer, of course, since the original informants are long deceased. All the first Native explorers had was their wits, directional guidance from the sun, moon and night sky and a strong desire to relocate.

Creation stories are cited in the segment, along with the newer scientific discoveries of settlement along the Pacific coast as well as evidence of migration across the Bering Strait during stages of the Ice Age. Historically non-Native scholars argued that migration had to occur in one place, not two places, or three. Today Native and non-Native scholars agree that migration occurred from all directions. Indigenous scholars strive to learn the complex interconnectedness between groups of early people and their present-day descendants. You’ve heard the expression that Indians are all related. The work of today’s professionals will show how that is true, and important.

If the remaining segments are as engaging and well-told as this first one, you may be compelled to buy the whole set. If you can’t wait for that, read “1491: New Revelations of the Americas Before Columbus” by Charles Mann, the book the series is based on.