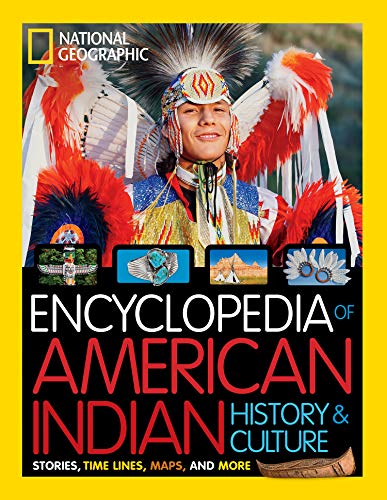 A two-page photo spread in the “Encyclopedia of American Indian History & Culture” shows Natives as sentinels, single file and hand-in-hand at the Standing Rock Reservation in North Dakota in 2016. The powerful image shows faces of strength and joy at the end of a day of protests, and includes a short excerpt on the nature of the protest to protect the tribe’s water source.

That brevity of explanation is the nature of an encyclopedia. It gives just enough information to whet an appetite for more. The photos – from public and private collections across North American – are among the best you will ever see of Native history and life today. Published by National Geographic, the book portrays the past and present through timelines, traditional stories, maps and more that profile 160 tribes from eight regions of North America .

The book is publicized as a resource for “young” readers, but it could fit nicely on the shelf of readers of any age who want an introduction to American Indians. On a back book cover in tiny print, you’ll find names and vitae of tribal members who contributed to the content, like Anton Treuer (Ojibwe), a Bemidji State University professor, and Dan SaSuWeh Jones (Ponka), a former tribal chairman now with the Oklahoma Indian Affairs Commission. 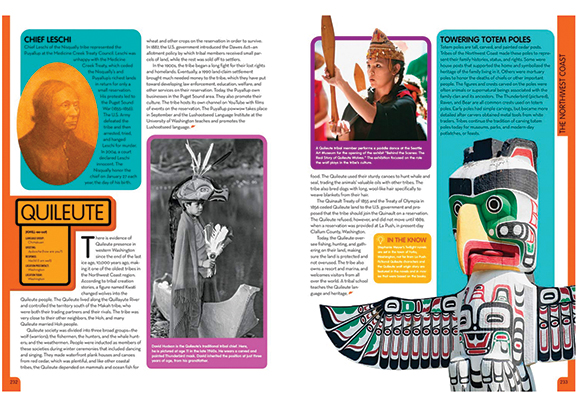 The review and contributions by American Indians suggests that National Geographic ensured that many experts vetted the content. One likes to think that the days when everyone but Indians wrote about Indians are long past.

The tribes are listed by region of origin. The Sioux, or Dakota, are in the Plains Region and the Ojibwe, also known as Chippewa or Anishinabe, are included in the Northeast Region. The Sioux page describes legendary leaders like Sitting Bull and Crazy Horse, as well as the Dakota’s wide expanse of land throughout the central US. Mention is made of trade with the French and support for the British in the Revolutionary War. Also, brief mention is made of the Dakota nation’s violent conflicts such as the U.S.-Dakota War of 1862, Red Cloud’s War, and the Battle of the Little Bighorn.

The Ojibwe page explains the migration of the people before the 1600s from the St. Lawrence River region on the East Coast to the Great Lakes regions from Michigan to North Dakota. The encyclopedia credits the Ojibwe with inventing the birch bark canoe, a lightweight mode of transportation that moved quickly through the region’s many interconnected rivers and lakes. Like the Sioux, the Ojibwe had good trade relationships with the French, and fought territory wars with the Iroquois to the east and the Dakota Sioux to the west.

One might argue that the above are puny introductions, but encyclopedias by definition stretch broadly without room for depth. Fortunately, the editors had the sense to make the colorful and often touching images the heart of the book. There’s a 1800s-era black and white photo of four little Wyandotte boys who could pass as kids from any Minnesota Dakota community. The Grand Ronde drummers easily resemble any drum group you’ll see at a Minnesota powwow. 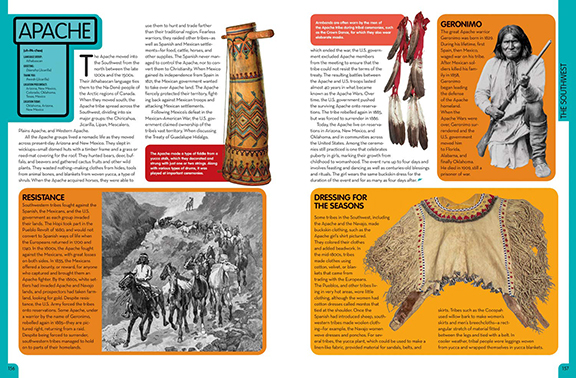 A quick look shows how the book nicely depicts what tribes have in common, and it as effectively shows differences due to geography, resources and history. A striking two-page photo shows a Navajo woman feeding her sheep on the Arizona border. Another photo shows the specialized nets used by the Tolowa to harvest smelt from the ocean. Another photo shows Seneca men playing lacrosse. Three little Inuit girls from Alaska are shown in warm ceremonial coats and leggings.

Small stories appear throughout the book that are perfect for reading aloud to a child. “The Rabbit and the Frog” tells an age-old parable about trust, and includes a sweet photo of a white rabbit. Another story explains why turkeys have red eyes. Another story explains how the coyote gained powers. The encyclopedia is a picture book at its best, melding historical fact with brilliant photography and appealing to readers of all ages.

Looking for a different kind of history book? Want to jump start your imagination with wonderful photos that depict the staying power of American Indians?
This is it.