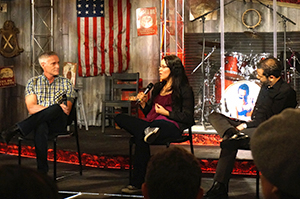 Art imitated life after a June 19

performance of “Bloody Bloody Andrew Jackson,” a production of

the Hennepin Theatre Trust that portrays the exploits of the U.S.

president responsible for the Trail of Tears.

In the run up to the performance, New

Native Theatre’s Rhiana Yazzie organized a protest of the musical

after she wrote an open letter about the play. In the letter, she

decried the organization’s choice of subject matter, “I think it

was an unfortunate choice for Minneapolis Musical Theatre to produce

the authors did, not considering the effect it could have on real

people or that Native Americans might actually be audience members.”

In the production, references to

Native American culture included the joke, “Tell me what’s the

difference between a little homosexual Indian boy and George

Washington? Besides the fact you’d murder either of them without

thinking twice?" In addition, Yazzie objected to the fact that

Native characters were portrayed by non-Native actors who were

written as stoic and speaking in a halting manner. Additional

references to Native culture included the character of Andrew Jackson

a declarative, “Your music sucks.”

the production’s run. But in a talk-back session after the June 19

performance, which included Yazzie and University of Minnesota

director Steven Meerdink said the show was shown in its entirety.

“That was an error with an actor

remembering lines, we were dealing with an awful lot that opening

weekend with an actor being hurt. I did not touch the script,”

Meerdink said. When Yazzie expressed her disappointment, he defended

the non-profit’s position as artistic freedom. “I respect your

opinion, however, when I think that when I first got ahold of the

script, I viewed this not as a retelling of an exact history and not

a slam, degradation, of the Native American population. I was looking

at the show more as a political statement of politics in general.”

saying, “Respect is a process and not simply a word said after the

fact. Respect is something that’s shown through speaking with someone

been made.” To which, Meerdink said, “As an artist, I don’t have

a right to do what I want to do on stage? That’s my second amendment

Yazzie expressed her disappointment in

the unedited musical’s performance because of what she and other

Native audience members believed to be the continued exclusion of

“The sad part, though, is that it’s

and you actually survive that – I don’t know, I hope and what I was

actually kind of thankful for when I saw that version was that,

we have 11 reservations here, our friends are Native people and we

wouldn’t put up with saying those things about Native people.’ And

so, I actually was really happy to see that version,” Yazzie said.

“All I really wanted to say was that

reaching out to the Native community and Native artists would have

enriched this production. Because ultimately if the point is to talk

about the history of what happened to Native people, wouldn’t it be

lovely to get to know them in the process?”

at the New Century Theatre from June 6-29. It was written by Michael

Jackson” revels in its stereotypical portrayal of Native American

history to Steven Meerdink (left) as University of Minnesota history