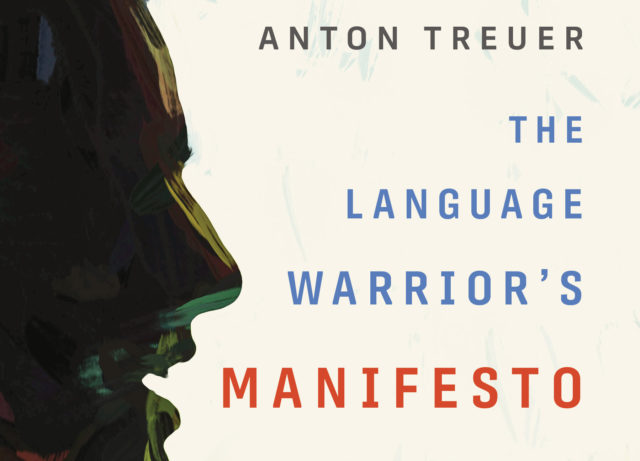 The Language Warrior’s Manifesto:
How to Keep Our Languages Alive No Matter the Odds
Minnesota Historical Society Press
January 28, 2020
208 pages

You may start Anton Treuer’s “The Language Warrior’s Manifesto” with a dab of curiosity. You’ll finish the book spurred with at the very least, dismay that you haven’t known your native language all your life, and at the most, a resolve to learn it now. You may be so fired up and inspired, you’ll vow that your children and grandchildren and the upcoming native generations learn, love and use their beautiful native languages.

Treuer is a professor of Ojibwe at Bemidji State University, his new book is a how-to manual that reminds the reader of why native languages must be preserved and protected, and then shows a campaign for achieving that very ambitious goal.

The middle section of the book, my favorite part, traces Treuer’s epic journey to learn the Ojibwe language from master speakers. His bold diligence undoubtedly puzzled and then delighted the honorable elders who took him under wing. Maybe those wise ones, most of whom have left the earth, knew they were mentoring a future language warrior. Elders just seem to sense stuff before anyone else does.

One of those elders, Archie Mosay, lived on Wisconsin’s St. Croix Reservation, which was 245 miles from Bemidji, where Treuer lived. It was the early 1990s and Treuer, with a newly minted college degree, went home to learn his language, become initiated into the Medicine Dance, fast, hunt, and learn who he was.

He heard about Archie, an elder whose English was clunky but whose Ojibwe was eloquent. Treuer showed up unannounced on Archie’s doorstep with gifts and tobacco. The old man took a hard look at Treuer, and then told him he had been waiting for him. Archie dreamed that a young man would show up who was destined to do something important for the people, and that young man was Treuer.

Treuer spent most of the summer at Archie’s home, driving him to places, filling pipes, preparing ceremonial items, tanning hides.

“He told me that the language was the key to everything in our culture,” Treuer wrote. “It was the cipher for sacred knowledge, and the Ojibwe way of being.”

After returning to Bemidji, Treuer took language lessons from Earl Nyholm (Otchingwanigan), a Bemidji State University Ojibwe language professor. His quest took a manic turn; Treuer attended every Ojibwe language class and language table throughout the area. Each night he typed up his notes, keeping multiple versions of stories and word lists. Every object at home was labeled with its Ojibwe name, including the salt and pepper shakers.

He heard of Scott and Susie Headbird, who lived west of Cass Lake, and showed up with tobacco and a spoken sentence of Ojibwe asking for language lessons. Once again, Treuer received a hard look, this time from Scott. But it worked out. Scott agreed to help.
The book brims with stories of generosity and humanity. Those alone make the book worth your time. Additionally, tucked into the fierce manifesto for the retention and celebration of native language is Ojibwe history and culture. Do you wonder why the languages were often lost? Treuer explains that. Care to better understand the 1934 Indian Reoganization Act? Treuer has ideas on that. Want to learn more about the differences between the Loon and Crane clans? They are here.

Humor takes center stage, as well. Treuer isn’t afraid to poke fun at his own frantic antics to learn the language. His account of elders coming together to create a language dictionary, and then losing it as they deciphered 30 different ways to say “fart” was pretty amusing. In general, his portrayal of elders is spot on. (Who hasn’t seen that cease-and-desist look from a grandparent that stops you in your tracks? Ha! You know exactly what I mean.)

The more intense how-to aspect of language learning is saved for the final quarter of the book. Here you will learn about the political intricacies of introducing a language curriculum, as well as the challenges of fund-raising, of finding and keeping teachers, of bringing a community on board, of dealing with parents, of dealing with state education standards, and of choosing battles carefully so enough energy remains for the next day’s skirmishes. In many ways, what Treuer describes can be extrapolated to lots of jobs in Indian Country. The conflicts. The dread. And the fabulous joy when victories emerge.

Here’s a sweet example. Treuer did consulting work with the Waadookodaading Ojibwe Language Institute in Reserve, Wisconsin. During a visit, he watched four-year-old children elaborately demonstrate the life cycle of a butterfly, followed by a half-hour of circle time devoted to the weather, led by a child who used visual aids. The kids spoke Ojibwe. Only Ojibwe. They were age four.

If you are immersed in the creation of your own language curriculum, you may have already read this book. If you can’t imagine why anyone would get so enthusiastic about mere words, you might want to read this. By book’s end, you’ll get it.