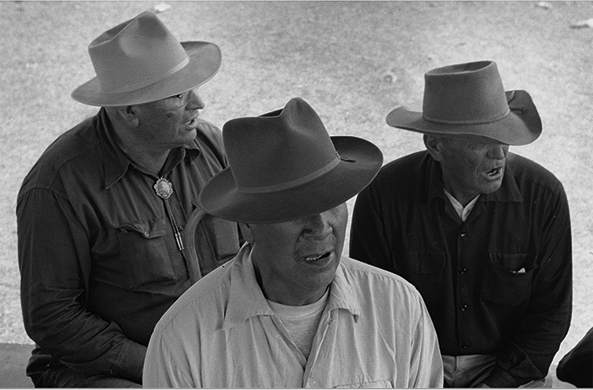 Singing Our History: People and Places of the Red Lake Nation, will be at the Katherine E. Nash Gallery at the University of Minnesota from January 19-February 13, 2016. There will be an opening Reception and Drum on Saturday, January 23 from 6 until 9 pm, featuring Ojibwe foods and culture.

The exhibition explores the many ways the Red Lake Nation has been and continues to be portrayed by artists and members of its communities through art and photography.

The exhibit is a collaboration between the Red Lake Ojibwe community and faculty and graduate students in the Department of American Studies. It features rare portraits of Red Lake people taken by Jerome Liebling in the 1950s, in addition to dozens of familiar images by the photojournalist, Charles Brill.

Jerome Liebling (1924-2011) photographed the people of Minnesota for two decades, beginning in 1949. Meatpacking plants, the state capital in session, homes for the disabled, the immigrant neighborhoods of St. Paul’s west side, and the Red Lake Ojibwe Reservation were each sites for  his purposeful photography.  His images have been collected by major art museums.

The first Professor of Photography in the Department of Art at the University of Minnesota, Liebling grew up in Brooklyn. Still in his late twenties when he first visited Red Lake, Liebling was deeply impressed by their people, culture, and unique political history, which remained an unalloted reservation closed to white settlement. He commented at the time, “Its setting was beautiful, but poverty was everywhere.”

Liebling portrayed Ojibwe people in ways that were dignifying, and used the opportunity to make visible a statement about poverty and social injustice in rural America, this time in Indian Country.

As Liebling said of his career, “My sympathies remained more with the folk who had to struggle to stay even, whose voices were often excluded from the general discourse.”

Charles Brill (1932-2003) was a pioneering photojournalist best known for his photography of American Indians at the Red Lake Reservation in the 1960s and ‘70s. The first photojournalist to graduate from the University of Minnesota, Brill worked for the Minneapolis Star Tribune before joining the faculty at Kent State University where he taught for the remainder of his career.

First arriving in Red Lake to photograph the annual powwow in 1964, Brill returned to the community many times over the following decades, resulting in the publication of his book “Indian and Free” in 1974 by the University of Minnesota Press.

The homeland of the Red Lake people is in northern Minnesota, and notable for never having sold or allotted their approximately 800,000 acres of land and water. The tribe is now involved in the project of constitutional reform, with a referendum expected in November, 2016.

he Singing Our History exhibit is an extension of the current interest at Red Lake in deepening their exploration of history, including the early constitutions. The exhibit features Liebling’s portrait of Peter Graves, the political leader associated with the first constitution. The exhibit will be permanently installed in the new tribal council and college buildings at a later date.

Today, the twin-cities metropolitan community is home to many Red Lake citizens and their families. Extending far beyond Red Lake Indian Reservation in northern Minnesota, Red Lake is a nation of Ojibwe people represented by communities throughout the state. All tribal citizens, regardless of residence, are eligible to participate in discussions and vote on the new constitution.

The exhibition weaves together the works of photographers in addition to Red Lake artists. Significantly, a private collector, the Minnesota Museum of Art, and the Minnesota Historical Society have loaned a number of paintings by Patrick Desjarlait (1921-1972) to the exhibit and his masterpiece, Red Lake Fishermen, 1946 will be featured.

As Desjarlait said, “I have always wanted to show others the interest and pride that the Chippewa take in their families, their ceremonies, and their environment.”

The Katherine E. Nash Gallery presents a portrait of contemporary Red Lake life for Ojibwe communities both on and off of the reservation. Accordingly, the exhibit will also feature art produced by a younger generation of Red Lake Nation members. Visitors, especially Ojibwe people and families of the artists and those photographed by the artists, are invited to participate in the ongoing narratives explored in the gallery, by adding their stories and pictures to the exhibition through a Workshop space in the gallery.

Gallery hours are 11 am to 7 pm, Tuesday through Saturday at the Katherine E. Nash Gallery, Regis Center for Art, University of Minnesota, 405 21st Avenue South, Minneapolis, 612/624-7530. Parking is available nearby on the street and at the 21st Avenue ramp. The parking ramp and the Regis Center for Art and gallery are wheelchair-accessible.

Exhibitions and related events are free and open to the public.