This is not the first time – nor will it be the last – that the prestigious Sundance Institute’s Indigenous Program has visited Minnesota. T­he Program has been steadily building relationships with Native nations, local arts and cultural organizations, and Indigenous filmmakers in Minnesota going back several years.

An Experimental Nonfiction Workshop and two Indigenous Short Film screenings in March – one at the Walker Art Center on March 7 and the second at Metropolitan State University on March 22 – marked the culmination of the Indigenous Program’s month-long series of programs focused on Indigenous film and filmmakers in Minnesota.

“Ours is an ongoing commitment to stay connected to this region given the rich history of the Dakota and Ojibwe nations as well as being a part of our modern history of activism within the American Indian community,” explains N. Bird Runningwater, (Cheyenne and Mescalero Apache) director of the Indigenous Program. “This is our second workshop but fourth overall public program that we’ve hosted over the years in Minnesota and it fits with our mission to support independent artists. We’re proud to have been connected with great talent who are now alumni of Sundance Institute programs.”

The free Experimental Nonfiction Filmmaking Workshop was held on March 23 at FilmNorth in Saint Paul. The Indigenous Program hosted the workshop with support from the John S. and James L. Knight Foundation and in collaboration with FilmNorth.

“The support of the Knight Foundation allows us to host public programs and workshops in Saint Paul,” says Runningwater. “Our workshop is an outreach effort for us to identify new talent and to share Sundance’s work with the local community.” 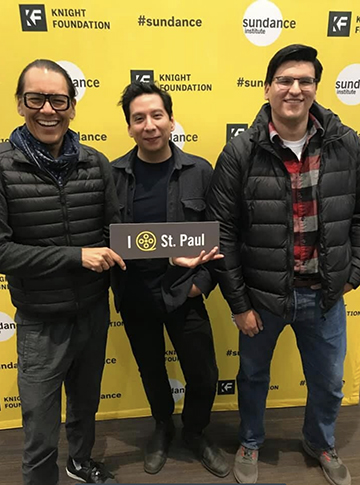 With the Indigenous Program’s commitment to supporting Native filmmakers and giving them several platforms to tell their own stories from the annual Sundance Film Festival to filmmaking labs, fellowships and workshops, the collaboration between the two organizations was a natural fit.

FilmNorth’s mission is to empower artists to tell their stories, launch and sustain successful careers, and advance The North as a leader in the national network of independent filmmakers. The organization achieves its mission by nurturing a vibrant, diverse community of film and media artists; providing education and resources at every stage of their careers; and celebrating their achievements.

“FilmNorth has a great history and reputation of supporting independent artists from the region and has a great reach in the arts community of the Twin Cities and tribal regions,” notes Runningwater.

“I think some people are surprised to know how diverse the Twin Cities and Minnesota are,” says FilmNorth Executive Director Andrew Peterson, who used to work for Sundance Institute and also programmed the Provincetown (Mass.) Film Festival.

“We have the largest Native American, East African and Hmong communities in the U.S. – and FilmNorth’s programming focuses on engaging all underrepresented communities. As a result, we brought outreach and advice to the Sundance Institute’s Indigenous Filmmakers Workshop,” said Peterson.

“There is a strong Native/Indigenous film community in Minnesota,” notes Peterson. “I’m especially excited about the narrative storytellers that have been nationally recognized the past few years, including Sundance Fellow Lyle Mitchell Corbine Jr. (Bad River Ojibwe) and Nicholl Fellowship winner Wenonah Wilms (Red Cliff Ojibwe) – both of whom are current McKnight Media Arts Fellows, a grant that FilmNorth administers with funds from the McKnight Foundation.”

“In addition, we’re seeing talent in front of and behind the camera emerge – participating in year-round classes and workshops at FilmNorth – so we’re excited to see more filmmakers emerge,” notes Peterson.

Local Indigenous storytellers went through an application process to be selected to participate in the workshop. They were chosen on the basis of “a strong interest and drive to want to tell stories,” says Runningwater, whose workshop role was to facilitate and get to know the participants and build a connection with them. Workshop topics included Indigenous aesthetics, oral tradition and narrative as well as cinematic approaches to Indigenous storytelling that aren’t entirely rooted in conventional methods of cinema. The 15 participants represented many Native nations, including: Arapaho, Bois Forte Ojibwe, Comanche, Dakota, Diné, Kickapoo, Long Plain First Nation, Nez Perce, Northern Arapaho, Oglala Lakota, Osage, Rosebud Lakota, Sisseton-Wahpeton Oyate, Standing Rock Sioux, Waskaganish Cree and White Earth Anishinaabe.

Renowned artist and filmmaker Sky Hopinka (Ho-Chunk and Pechanga) led the workshop. Hopinka is an awardee of a grant from the Indigenous Program. “They’ve also given me a grant in the past for a feature film I’m working on, and have been supporters of my work for a number of years,” says Hopinka.

Hopinka’s video work centers around personal positions of Indigenous homeland and landscape, designs of language as containers of culture, and the play between the known and the unknowable. His work has played at various festivals including ImagineNATIVE Media + Arts Festival, Images, Wavelengths, Ann Arbor Film Festival, Sundance, Antimatter, Chicago Underground Film Festival, FLEXfest, and Projections. His work was a part of the 2016 Wisconsin Triennial and the 2017 Whitney Biennial. Hopinka is currently a fellow at the Radcliffe Institute for Advanced Study at Harvard University.

This year, Hopinka has been selected as one of the organizers of the 79th Whitney Biennial’s film screenings. Hopinka presented his work at the workshop and offered valuable feedback to the participants. “I talked about my background, areas of interest, how I approach filmmaking and what my process is like,” said Hopinka. “I discussed the tenets of Indigenous filmmaking, questioning what that term means, how it’s a malleable form and one that is ripe for experimentation, and how experimental film is expressive in a decolonial concept.”

“My goals for the workshop were to have an open and honest conversation about my practice and thinking, and to listen, hear and answer any questions the participants had,” says Hopinka.

“Sky’s work is so innovative and he has an approach and style of storytelling that embodies strong elements of Indigenous storytelling that mesh beautifully with cinematic tradition,” notes Runningwater. “He’s a deep thinker and theorist whose approach was quite inspiring to our workshop participants.”

“Our goal for the workshop was to connect with new artists and by having them work with Sky find fresh ways for them to tell their unique stories and maintain their own unique authenticity and voice,” says Runningwater.

Leya Hale (Dakota and Diné) was one of the workshop participants. She is a Producer at Twin Cities PBS. Since 2013, she has won several awards for her work. Most recently, Leya received a 2018 Upper Midwest Emmy Award for “Climate Smart: Cities Working Together” for Best Science/Environment Documentary. She was selected as a Knight Fellow for the 2017 John S. and James L. Knight Foundation through the Sundance Film Institute and was selected for the 2018 Big Sky Film Institute Native Filmmaker Initiative Fellowship program.

“My overall experience at the workshop was very inspirational,” says Hale. “I learned so much from filmmaker Sky Hopinka’s process and inspiration for his pieces. I left motivated to start incorporating more Indigenous languages into my work and, most importantly, I left with a broader network of like-minded Indigenous filmmakers who I can turn to for support.”

“One of the most valuable techniques I learned and will utilize within my process is the art of intentionally manipulating visuals such as with overlays or color effects to better create poetic and thought-provoking images,” says Hale. “These visuals help create spaces for audiences to ponder on and draw their own conclusions rather than being so literal or direct. In addition, I learned about the importance of gaining access and permission before and during filming within Indigenous spaces even as an Indigenous filmmaker.”

“With any workshop our goals are the filmmakers’ goals,” says Peterson. “My hope is that each filmmaker had an ‘ah-ha’ moment – filmmakers will find their stories and their voices – what makes each special – and then move forward with confidence as they develop and shoot their next projects. I also hope that Sundance will find filmmakers that surprise and inspire them – perhaps learning something new about stories and storytellers in this region who, like the Coen Brothers, have developed exciting and unique voices through the experience in The North.”

“It’s my hope that the workshop participants find future collaborators through this workshop,” says Peterson. “Filmmaking can be such an isolated experience – working alone on a script, editing at home, etc. Opportunities to come together like this connect artists who might not have met otherwise.”

“There will be future workshops in Minnesota hosted by a variety of Sundance Programs,” says Runningwater. “Each core program at Sundance rotates through a series of cities within the Knight Foundation footprint. Artists should keep an eye out for other programs coming to Saint Paul, such as our Documentary, New Frontier and Feature Film Programs, which will bring exciting workshops to the community here.”