Power of Four: Leadership Lessons of

Sioux), Lakota historian, educator, and author reminds us in his latest book,

The Power of Four:

that true leadership is only possible

when character is more important than authority. Corporate executives know how

to turn a profit, legislators and presidents hold positions of power but does

that qualify them as leaders? Is anyone vested with authority automatically 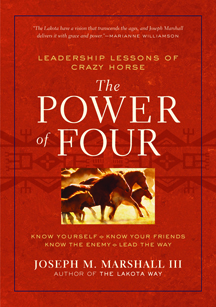 In his book, the author puts forth that

we need to redefine our idea of

leadership altogether. What makes a good and effective leader? Marshall

draws inspiration from Crazy Horse, Red Cloud and Sitting Bull to develop his

He also draws his belief from a time when the Lakota

people of the northern plains had the best deterrent to bad leaders; they

simply refused to follow them. While Crazy Horse is best known for his skills

as a military warrior, Marshall focuses on Crazy Horse’s achievements off the

battlefield, where his leadership skills were most clearly built and

Marshall contends that Crazy Horse was

connected to the environment, practiced meditation and prayer, and was a

believer in the power of the number four, which Marshall says occurs everywhere

in nature. From the events of Crazy Horse’s life, the author details four

and Take the Lead.

A consultant and lecturer on leadership

skills, Marshall has developed a leadership seminar program based on the

philosophies of Crazy Horse. In The Power of Four, he names current day enemies

of Native people as “apathy, ethnocentrism, and racism”, and calls on Natives

to follow the example of Crazy Horse. Marshall advocates that if our current

leaders were to effectively address these problems, many of our other external

Marshall, who grew up on the Rosebud

were closest to it.

Marshall has worked as both technical

adviser and actor in television movies, including Return to Lonesome Dove, The

Real West and Into The West. He is a

recipient of the Wyoming Humanities Award, and the Pen Center USA Beyond

Margins Award for an author of color. Other awards include: the Mountain Plains

the Hand; the South Dakota Author of 2006; the 2005 Mountain Plains Literary

Marshall’s other books include: The Day

Going: The Art of Perseverance; The Journey of Crazy Horse; and The Lakota Way: Stories and Lessons for Living.

discussing his latest book at Birchbark Books in Minneapolis on Friday,

February 20 at 7 p.m., and will be signing books afterward. The event is free

and open to the public, and takes place at Birchbark Books/Isles Deli, 2115 W.