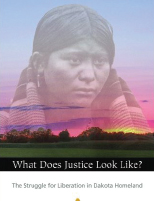 A passionate and unyielding voice for justice, Waziyatawin, Dr. Angela Wilson, advocates for Minnesota Truth vs. Minnesota Nice. This book is first of all a terse and eloquent recapitulation of Minnesota history in relation to the Dakota, in other words, it is a clear eyed and sorrowful account of genocide. Waziyatawin uses the loaded word genocide with a careful explanation of its accuracy. She is painstaking in her efforts to bring clarity to a divisive subject. It is so important for Indigenous people in Minnesota, whatever their tribal origins, to stand together. For that reason, I hope that Waziyatawin’s ideas can be separated from any personal issues with other tribal people — some of which are recounted in this book. Considering our mutual history, we should all rise above the small, the petty, the all-too- human ways that tribal people are forced to struggle with each other for recognition by the power brokers in a dominant culture.Waziyatawin’s forceful recommendations for reparation, if adopted, could make Minnesota a leader in the difficult task of integrating the ugly truths of history into an understand of this state’s, and this country’s, relationship with Indigenous People. Acknowledging the truth makes a people stronger, not weaker.As a specific example,Waziyatawin compares Fort Snelling’s disgraceful “fun fort” self-depiction with the somber reality that imbues other concentration camps and Holocaust memorials. The compelling facts about Fort Snelling include the sacred nature of the land itself, and the fact that it is filled with the marked and unmarked graves of Dakota ancestors, including women who starved themselves to death out of grief, women raped by soldiers, children and elders dead of sicknesses that raged through the fort. Minnesotans also hanged Dakota leaders on that earth. And so when Waziyatawin quite reasonably advocates returning the Fort to the Dakota to do with as they decide, it would seem an act of unquestionable justice. It seems, in fact, a great idea. Nobody who reads this book will ever drive to the airport again without seeing the devastated woman on the cover – a young woman interred in what became a death camp in the winter of 1862-63. If Fort Snelling was to become a Dakota garden and ceremonial ground, the young woman’s thousand mile stare would at last rest with the living. — Review by Louise Erdrich